How to one-up the Greeks and what Shepard Fairey has to do with Copenhagen circa 1891.

Libraries have a special place in history as a hearth of culture that kindled the greatest feats of science and the grandest works of art. Yet today, they’re in danger of being left precisely there — in history. As our collective use of libraries dwindles in the digital age, five brave efforts are innovating the concept of “the library” in ways that make it as culturally relevant today as it ever was.

Almost nine years ago, NYC design studio Pentagram got involved with the Robin Hood Foundation in an inspired effort to build new elementary school libraries throughout NYC’s five boroughs — the best architects were to build them, private companies were to fill them with books, Pentagram were to design the inspirational atmosphere and craft the entire identity for what became The Library Initiative.

But they found something interesting — even though the libraries were mostly located in high-ceiling old buildings, shelves could only be as high as the kids could reach, leaving a lot of space between the top of the shelves and the ceiling. Pentagram saw this space as a canvas to fill with something wonderful, so they partnered with a handful of top-notch designers to create murals that are just that — absolutely wonderful.

Today, these inspired murals can be found in more than 60 libraries across the five boroughs, featuring the work of designers and illustrators cherry-picked by the Pentagram team — from a series of photographic portraits by Dorothy Kresz, to a visual interpretation of words through silhouettes by Rafael Esquer, to books hidden in images in the iconic illustration style of Christoph Niemann.

Needless to say, we love the idea. Design is only as valuable as the change it ignites — in our understanding of beauty and truth, our conceptual and aesthetic literacy, yes, but also in our greater social sensibility. And harnessing the power of design to enhance “literal literacy” by turning libraries into cooler, more inviting hangouts for kids, well, that’s just pure beauty and truth.

So for today’s refresher purposes, his fantastic TED talk should get the job done.

We’d love to see Jay open up his library to those with the greatest urgency of fostering the spirit of human imagination — children. Because whatever is behind the doors of our cultural library, a school bus should be in front of them.

It’s always a delight to see the stiffest and most traditional of institutions embrace fundamental elements of today’s social spirit.

Which is why we love seeing The Library of Congress on Flickr. Their collection features nearly 6,000 images of historic hallmarks — from the evolution of the women’s rights movement to incredible World War I panoramas to a breathtaking century-oldgrand tour of Europe and the Middle East. 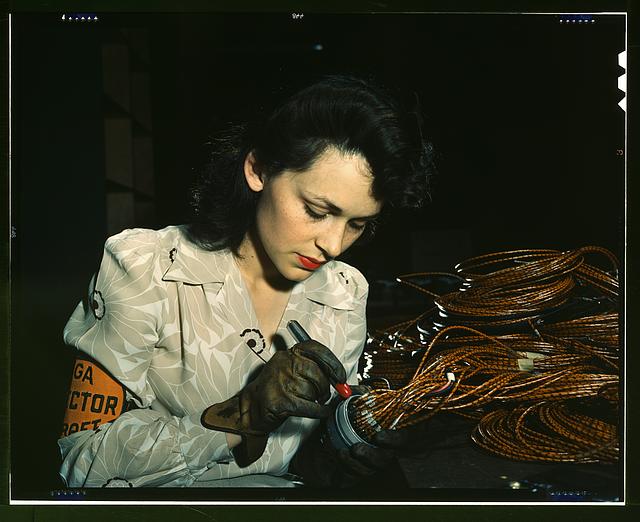 Go ahead, get nostalgic over ages you didn’t really live in to remember. It’s okay, we did too.

LIVE FROM THE NYPL

Turns out, you can actually talk in libraries. Some even hand you a mic — at least if you’re on one of the NYPL Live panels, a fantastic talk series by and at The New York Public Library. The events are available as free audio podcasts on iTunes, with short video highlightsviewable online. We were recently taken with NYPL’s REMIXevent, an excellent discussion titled Making Art and Commerce Thrive in the Hybrid Economy. Moderated by cultural historian Steven Johnson and sponsored by Wired, the conversation between Creative Commons founder Lawrence Lessig and now-legendary street artist Shepard Fairey, whose Obama “HOPE” poster became the most iconic political design of all time, offered a fantastic discourse on the intersection of creativity and “fair use” — a particuarly timely discourse amidst the AP’s preposterous lawsuit against Fairey.

Watch the full program online for brilliant insight into the absurdities of today’s copyright legislature and the unncessary ways in which it hinders the inevitable mergence of  today’s mashup culture.

Web entrepreneur, activist and digital librarian Brewster Khale, possibly the most influential figure in today’s digitization movement, is out to gift the world with universal access to knowledge.

Since 1996, his Internet Archive has amassed an enormous collection of cultural artifacts — text, audio, moving images, software, even archived web pages — offering permanent access for researchers, historians, scholars and anyone else interested in the cultural anthropology of our civilization.

We really need to put the best we have to offer within reach of our children. If we don’t do that, we’re going to get the generation we deserve — they’re going to learn from whatever it is they have around them.

Inspired by an inscription above the door of the Boston Public Library — Free To All — Khale set out to, essenetially, “one-up the Greeks” by building a hub of culture that puts Egypt’s Library of Alexandria to shame, using technology to bring all of the world’s knowledge to as many people as want to make use of it — everything that was ever published and meant for distribution available to anyone who ever wanted access to it.

Khale’s TED talk is an excellent introduction to the many facets of this monumental movement, which will no doubt reshape today’s relationship with history and tomorrow’s conversation with today.

Explore the Internet Archive and, while you’re at it, consider that the very act and opportunity of doing so makes you the envy of the Platos and the Gutenbergs of history. And, really, how incredible is that?

Every blade of grass has an angel, that leans over it and whispers "Grow! Grow!"
The Talmud