Six-year-old Nico Castro from San Bruno, Calif., isn't letting his battle with brain cancer affect his spirit of giving this Halloween. After his doctor gave him the green light to go trick-or-treating thanks to a break in his chemotherapy, he was jumping for jack-o'-lanterns, what a treat! But here's where it gets tricky.

“Even though he's worse off than some of these other kids in the hospital, he's worried about them and oh they can't go trick-or-treating and oh they can't get candy,” said Nico's mother, Marlene Castro, in a proud, but somber voice. 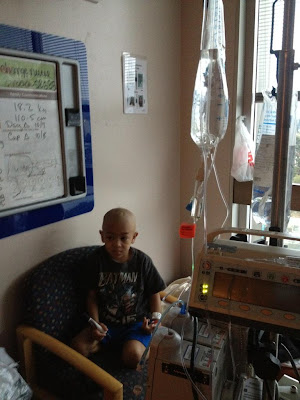 This worried little Halloween hero with a big heart asked his parents if they could buy costumes and treats for the kids in the cancer ward. "I was sad they wouldn't have candy," Nico explained. Marlene and her husband Raul Castro were moved by his thoughtfulness, however, it would be impossible to buy costumes and goodies for the more than 50 sick kids in the hospital. The family took a big financial hit after Nico's diagnosis.

Nico knows what it feels like to have to sit on the sidelines during the holidays. Last November, instead of celebrating, he was in the hospital too ill to take part in the festivities. He was diagnosed with medulloblastoma, cancer of the cerebellum. But during this scary time, all he could think about was if he would be healthy enough to celebrate his favorite holiday -- Halloween.

So in true superhero fashion, they took action and started a costume drive. "We were so surprised from the support outside of our community. The community really came together and packages of costumes are coming from Pennsylvania, Illinois and Texas," Raul said. “The costumes, the little trinkets that the kids in the beds are getting...just an instant and it changes their demeanor and whole attitude about being sick.”

Beware: grab a Kleenex before watching this Halloween hero's story:


It's amazing to see how the community comes together when they're given a healthy dose of inspiration. After meeting Nico, I quickly realized his superhero power is inspiring people to expand their minds, be more compassionate and to open their hearts. 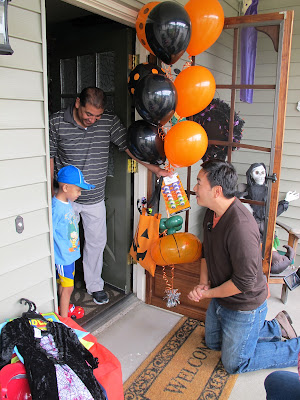 After an initial call with Nico's mother to set up this shoot, I couldn't help but pitch in. I made some calls to local businesses and told them about Nico's story. Sparky's Balloons in San Francisco donated the festive bouquet of balloons and a goodie bag filled with spooky toys and trinkets. My good friend Jessica Chang reached out toDaydreams and Nightmares, a local costume shop in Modesto, Calif., that donated 20 costumes. Green Apple Books in San Francisco donated a $25 gift card after hearing that Nico likes to read. Our Facebook friend, Amanda Rivas from San Jose, Calif., saw our FB shout out, donated 15 costumes and came along to our shoot to surprise Nico. Thanks Rivas family!

Since my nonprofit Go Inspire Go brings you stories of everyday heroes, leverages social media to build community and ultimately inspire action, we had a few tricks up our sleeves -- so I reached out to super mom Amy Pankratz, founder of Wonder Capesin Sioux Falls, S.D., and BAM, she quickly crafted a custom Batman cape for Nico and two other capes for his brother, 11, and sister, 8. I told her that Nico likes Batman because the mask covers his bald head. She told me that made her sad, so she made an extra trip to the fabric store and crafted a mask too. 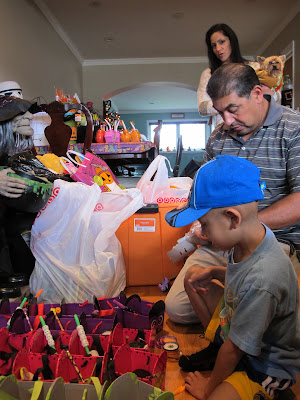 The donations and kind acts continue to pour in. My friends asked if we could go to the hospital on Halloween to hand out goodies to the kids. The community has pitch in to offset some of the medical costs. More than $1,200 has trickled in.

It is hard to sit back and not take action after meeting this inspiring family who embody the real meaning of family, generosity and being present. "If you would have asked me a year ago that my son would be battling brain cancer and I would be going to the hospital daily, I would have never believed it," Marlene explained. "Ironically, every year we would give donations to St. Jude's Hospital for sick children."

It's easy to see where Nico got his kindness, compassion and giving spirit. When you hear of Nico's story, you can't help but reflect on your own life. As a kid, I thought Halloween was about ghosts, goblins, candy and costumes. But as I get older, I realize that at its core, this hallowed holiday is more about giving, not just with candy, but sharing and revering in these little moments with each other. 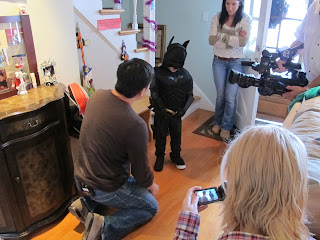 We grew up on welfare, so buying a cheap $5 costume was expensive to us. I have vivid memories of autumn. I can smell the morning dew on the vibrant leaves that crinkled under my little feet -- orange, yellow, brown. My brothers and I were excited for my auntie Hong to get off work and take us costume shopping at the local Thrifty's and Newberry. I remember playing with the flash lights, Halloween Pez dispensers and toys in the store aisles that I would have to put back because we didn't have the money to buy them. Still, we were happy because each of us left with a costume.

I never told Auntie Hong how this little gesture and the inexpensive costumes meant the world to us. That's all we cared about. Experiences and connections and simple acts of generosity are what this holiday is truly about. Ironically, Auntie Hong passed away of breast cancer at age 47. I didn't realize it at the time, but Auntie Hong's kind seasonal act had a profound impact on how I see the world today. Her kindness was passed along for many holidays to come. My parents didn't understand or celebrate Halloween or many other holidays, so I made a concerted effort to make holidays a big deal for my younger cousins and now for my nephew and niece. It's inspired me to be kinder to others, give what I can, and to be present and live every day with the attitude of gratitude all year round. It's interesting how the little moments in life come full circle. Now that I have a voice and a platform, I'm using it to multiply the deeds of superheroes like Nico. 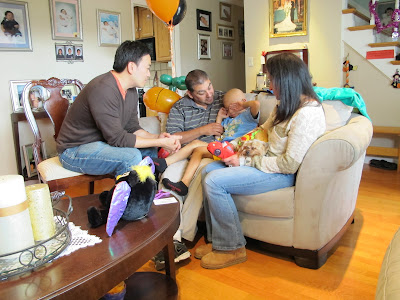 Nico has undergone extensive surgery to remove his brain tumor, which was about four-and-a-half inches big. Doctors were able to remove most of the tumor from his cerebellum, but couldn't take out the rest of it because it was attached to his brain stem. Meanwhile, doctors believe the prognosis is good, but worry about how the treatment will affect Nico's standard of living in the long run.


This one's for you Auntie Hong. Nico, my Halloween hero, thank you for your thoughtfulness and allowing me to say thank you to my Auntie by telling your story!

This article is reprinted here with permission. Toan Lam is the CIO (Chief Inspiration Officer) of www.goinspirego.com (GIG), a nonprofit video-based website that uses social networking to inspire social change and encourages viewers to “Discover and Use Your Power to Help Others” -- on: Twitter & Facebook.

Peace is the only battle worth waging.
Albert Camus