Home > Nature > Phone Booths Find New Lives
We are not to throw away those things that can benefit our neighbor. Goods are called good because they can be used for good: they are instruments for good, in the hands of those who use them properly. --Clement of Alexandria 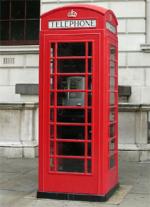 Dec 7, 2010-- It's iconic, a symbol of British-ness the world over: the red telephone box. But they are disappearing as fast as you can say "cell phone." With 85 percent of adult Brits using mobile phones, these booths are rapidly becoming obsolete. Now they are being recycled for astonishing and eccentric uses. The empty, often vandalized phone boxes are a huge expense for British Telecom (BT), so they have been giving them to communities; they are about to give their 1,000th one away. BT held a competition to determine the most unique usages, which include renting it to local community people for a week to make their own exhibits, posting poems, a vegetable swap and magazine swap location. (2885 reads)

Read Full Story
What's your reaction? inspiring fascinating courageous hopeful
Take ActionThink of new uses for things you no longer use and/or donate them to people who could use them.

No water, no life. No blue, no green.
Sylvia Earle

We've sent daily emails for over 16 years, without any ads. Join a community of 243,254 by entering your email below.