Home > Business > Third Way Leadership
Go to the people. Live with them. Learn from them. Start with what they know; build with what they have. But with the best of leaders, when the work is done, the task accomplished, the people will say, we have done this ourselves. --Lao Tzu 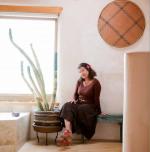 Oct 2, 2011-- "Cultural anthropologist Angeles Arrien suggests we're shifting from an either/or to a both/and culture -- one that requires opening the aperture of our irises to better perceive the truth that surrounds apparent paradox. Though two conflicting views may seem irreconcilably opposed, when we expand our vision enough to encompass a whole that's larger than both, a new reality often emerges -- a third way that's big enough to address each of them within its purview. In a both/and culture instead of avoiding dissenting views, we might embrace the opportunity they raise for expanding vision, exploring them through practicing respectful disagreement. Apparent contradictions can serve to make visible truths that may not have been otherwise seen or acknowledged, enriching the health of the whole through their emergence." Nina Simons, co-founder of Bioneers, shares her perspective on Third Way leadership. (11444 reads)

Even the mighty oak was once a little nut like you.
Sabina Peters

We've sent daily emails for over 16 years, without any ads. Join a community of 164,299 by entering your email below.