Home > Generosity > The Leadership Imperative
It's up to each generation. There are no guarantees.
Oren Lyons 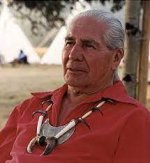 Aug 8, 2021-- "Oren Lyons, seventy-six, is a wisdom carrier, one of the bearers of a variety of human tradition that cant easily be reduced to a couple of sentences. One reason he and the tradition for which he is a spokesperson isn't more widely known is that he doesn't actively seek forums from which to speak. If someone asks him, however, about the principles behind the particular Native American tradition of which he has, since 1967, been an appointed caretaker, he is glad to respond. He chooses his words carefully, and occasionally, these days, there is a hint of indignation in his voice, as if time were short and people generally willful in their distraction." What follows is a powerful conversation between Barry Lopez and Oren Lyons. (4263 reads)

Read Full Story
What's your reaction? inspiring fascinating courageous hopeful
Take ActionListen to Oren Lyons share the story of how he first learned about his relationship to Earth here. [more]

When we show our respect for other living things, they show respect for us.
Arapahoe Proverb