Home > Generosity > Jack Healey: Create Your Future
Our voice, our collective voice, our eagle's cry, is just beginning to be heard. We call out to all of humanity. Hear us!
Leonard Peltier 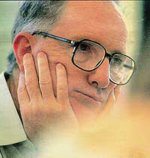 Aug 24, 2022-- Jack Healey, a former Franciscan priest and former head of Amnesty International-USA, has pioneered the use of music activism to exponentially raise the visibility of human rights and inspire nonviolent action by youth. Called "Mr. Human Rights" by U.S. News and World Report, Jack over a 60-year career has "helped move the topic of human rights from closed-door diplomatic negotiations to widespread awareness, public debate, and direct citizen action." He saw early on the power of music to inspire and galvanize while a director of the Peace Corps in South Africa during the freedom struggle, and would go on to bridge art and activism by enlisting top music stars to activate citizens against oppression everywhere. Since 1994, Jack has fulfilled his dream to create and lead "a one-person organization that could be effective as a medium-sized human rights group with a lot less money," with the D.C.-based Human Rights Action Center. Read an excerpt from his memoir, "Create Your Future," here. (1611 reads)

The more simple we are, the more complete we become.
August Rodin

We've sent daily emails for over 16 years, without any ads. Join a community of 161,728 by entering your email below.