Home > News > Peace is Possible: The Remarkable Story of a Prison Friendship

Peace is Possible: The Remarkable Story of a Prison Friendship Claudia and Ciliana during one of many reconciliation events

For more than 50 years, the Revolutionary Armed Forces of Colombia (in Spanish, FARC) have been fighting a guerrilla war for social justice. In response, the rich and powerful created paramilitary forces to defend the existing social order. On both sides, those doing the fighting are mostly poor campesinos (villagers) and workers.

Ciliana, a graphic designer, is serving a 29-year prison sentence for a killing as a member of the Paramilitary forces. Claudia joined the FARC to offer her first aid and psychology skills. So far, she has served eight years of her 40-year sentence for killing and terrorism. They are serving their terms in a prison that houses women sentenced for violence on all sides of the conflict. Claudia and Ciliana are cellmates—and best friends.


I had the privilege of interviewing them in the prison. As we talked, they radiated peace and thoughtfulness. Their faces were lit with joy, and sometimes sadness.

Positive News: What is so special about your relationship?

Ciliana: I was here for a year when Claudia was transferred to my unit and assigned as my roommate. If you are from the opposite group it is unusual to share a room and not request reassignment.

Claudia: When I arrived in my new prison room I found a very supportive person, and when I realized later that she was from the Paras, I didn’t care. Ciliana was ok with me, because she tries to see a human being behind the crime. We started to do everything together.

Ciliana: That’s when we realized that we had a lot in common. We witnessed each other’s children grow up, and we accompanied one another in the pain of not having them close.

Claudia: I was there when Ciliana got her verdict, and I got to support her in her distress. When I was on the phone with my 4-year-old daughter Ciliana would comfort me.

Ciliana: We both realized that neither one of us had any intention of hurting anyone.

We also realized that we could go beyond the ideology that creates conflict and war, and unite, which rekindled in us the hope for humanity.

âWhen we discuss things, we often have different viewpoints: Claudia thinks to the left [politically], and I to the right. But we search for common ground.

PN: How have others reacted to your friendship?

Claudia: It’s rare for people outside to understand our friendship. People are shocked because there is a mentality out there that if you are with one side, you can’t be with the other.

Ciliana: Other inmates were also surprised that we became friends.

PN: Did it affect others in any way? 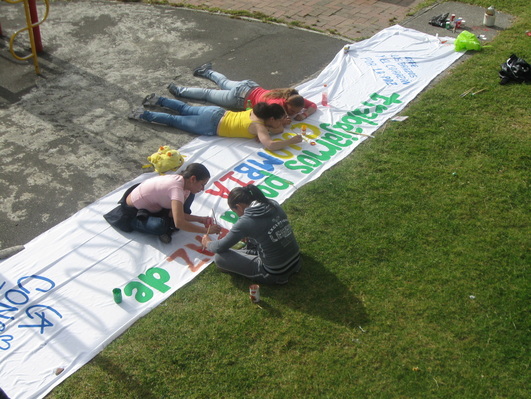 Group members making a banner: "We are working for peace in Colombia"

Ciliana: One day, five years ago, we thought that if we can do this [become friends], why can’t others. We noticed that if we want to reconcile, we first have to start with ourselves. So we proposed a reconciliation project with other women in prison.
Unbeknownst to prison staff, we gathered women from the opposing sides for a private ceremony. This ceremony helped us to align ourselves with the purpose of moving toward reconciliation, and to set up a working group focusing on how to forgive ourselves and others. Since then, we have been doing powerful activities.

Claudia: Once we got strong as a group, we invited [conflict] victims from outside the prison to join us for some activities. We have done all kinds of reconciliation activities. We decided that the military, those defending the state, were victims too. The event to which we invited the military was significant because the women here were worried that they wouldn’t be well received. But the opposite happened. The members of the military, others present, and the women, hugged and cried together.

It was this event, with my daughter present, that touched me the most. That’s when, in front of everybody, I asked her for forgiveness. We are all one family. Even now, a year later, we still stay in touch with some of the military participants.

PN: What are your plans for the future?

Claudia: Once we’re released, we’d like to create a center to continue with our reconciliation ideas, using what we’ve learned here.

PN: How can we all create a better world?

Ciliana: First, we need to judge less. Secondly, we need to see one another in our essence. It’s true that people have been hurting each other, but that’s not the essence of who we are. Being able to truly forgive is important and the way to create lasting forgiveness is to really see each other’s humanity. For the victim to hear what brought the perpetrator to commit an act of violence; for the perpetrator to fully take in the impact of his actions by listening to the victim. In the current Colombian reconciliation hearings there is no room for such humanness to emerge through genuine interaction—and that needs to change.
..................................................
It is thanks to Camila Reyes, who arranged the meeting, that the message of these two remarkable women can reach us beyond the prison walls.

Syndicated with permission from Positive News . Positive News (PN) is a not-for-profit positive media source that reports news from around the world and right next door in the areas of sustainability, social equality, education, happiness and much more. The news is delivered via a printed newspaper and electronic daily news.

If you want to lift yourself up, lift up someone else.
Booker T. Washington