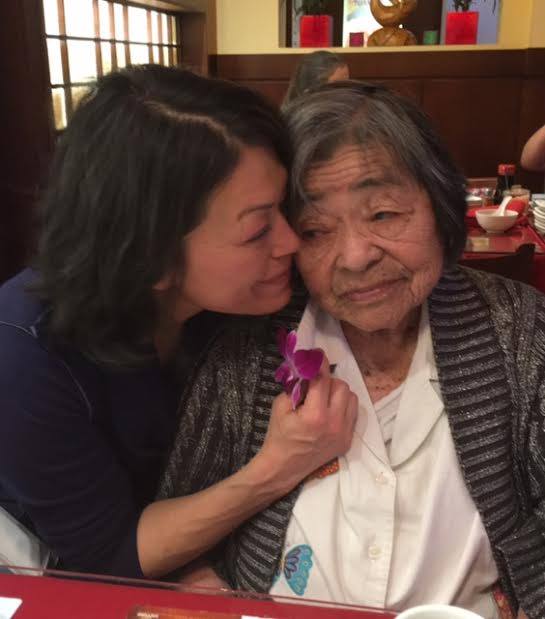 Two and a half years ago my grandmother was placed in a nursing home where she will live out the rest of her life. She has dementia and so her memory capacity has been marred.   Somehow though she remembers kindness.  She is my constant teacher.  One of things we like to do is walk down the halls in the nursing facility saying hello to the other residents.  We stop say hello and wait for an answer.   We rarely get a verbal response. My grandmother will put her face up real close so she and the neighbor will be looking eye to eye then, she will say hello again as she squeezes their hand.   She doesn't actually understand anymore that most of the residents are no longer verbal.  Still, some kind of connection is made.  And, actually there is no memory of these encounters but the next time we pass there is some kind of recognition whether a flicker of the eyes, or a silent reach of a hand.  It is beautiful even if I am perhaps the only witness who understands the connection comes from an earlier time.  Community is created by these moments, these silent connections, these touches of the hand.  When I go to the nursing facility, it is like going to the village.  I do not know the individuals histories but I have a sense of their spirits now and I have come to care for them.  In that context, I would like to share a story of my time with my grandmother and some of these elders that I have come to think of as my relatives too in a way. So....

Two fire trucks and an ambulance were in front of the nursing home as I pulled up. My chest tightened. The reality here is that people do not necessarily get better – they come here to die. Still, after visiting almost 6 months now, I have come to care for the residents. It always makes me sad when someone passes. Inside, I half expected there to be a rush of firemen or paramedics shouting, “Code blue” or “Clear the way!” but that is only on TV.

Here, it is business as usual – all in a days work.

Down the hall, Mr. Le was propped up on the sofa, his one foot in his wheel chair. He has good days and not so good, today was a sad one. I sat with him while he spoke to me in Vietnamese with tears in his eyes; I held his hand and nodded as if I understood.

Later, Mrs. Owens brightened up as I came into the room and reached for me as she always does now. I spoke to her about the cold and laughed about winter being here for sure before going to my grandmother who was working intently on a word search puzzle. Turns out she’s pretty good at finding the words; It is the one activity that keeps her from wandering around lost. I greet her with a big smile and hello – she responds in kind adding, “Where have you been? Long time no see! Sit down, Sit down!” It is part of our ritual. Next we take a walk through the halls where she complains to all the nurses, “She’s making me…WALK!” We all laugh including her.

Next, is shower-time - another something she will lightly complain about at first but is always grateful for during and afterwards. We spend shower-time getting wet (me barefoot but fully clothed) and laughing through the washing and drying. It is a sweet time, I will never forget. Before putting her to bed, she hugs me tightly and thanks me for helping her. I say my goodnights and sweet dreams to both her and Mrs Owens who now adds, “Be careful!” with a tiny wave and a smile.

As I approach the front lobby, I see Mr. Yakov in the doorway – he was trying to escape (for a 90 something year old man with a broken foot confined to a wheel chair, he is pretty mobile). Now, he is holding on to the door refusing to let go. 3 nurses are trying to get him to come inside.

Tomorrow all of this will be forgotten. At least, by most who live here. For the rest who remember, no matter, it will be a new day for us as well .

UPDATE from two years later: Mr. Le has a girlfriend now - a sweet woman who also lives at the facility and who speaks only Korean (he only speaks Vietnamese). She doesn't walk so he pushes her in her wheel chair from his wheel chair with his one foot. At meals, they sit together and he shares his napkins with her (he was homeless at one time so hoards napkins-this is connected somehow). When they are apart, he is more disoriented and she calls repeatedly for "the old man" in her language (after I found out what she was saying and before I knew of their friendship, I wheeled her over to the old man I thought she meant (there are a few to choose from lol), she seemed agitated and wrinkled her nose but when I took her to see Mr. Le they became animated as if in the middle of a conversation) - when they are together, they are happy - love is a beautiful thing and, not so complicated really.

Mia Tagano is an actor, voice over artist and performing arts teacher. She's toured with the Royal Shakespeare Company and performed in scores of stage productions in the United States. Her dedication towards her 96-year-old grandmother has touched many across the world. Read more about her inspiring journey here.

The truest greatness lies in being kind, the truest wisdom in a happy mind.
Ella Wheeler Wilcox

We've sent daily emails for over 16 years, without any ads. Join a community of 246,292 by entering your email below.