Home > News > Some Kind of Wonder-Pig

--by All Animals magazine September/October 2014, syndicated from humanesociety.org, Mar 03, 2017 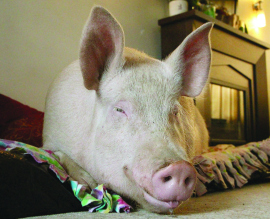 he has a popularity rating most teenagers can only dream of. Her main Facebook page has more than 160,000 likes. Her musings about life with her two dads in Ontario, Canada, draw thousands of comments. And while she can’t take selfies, her photos get forwarded around the world. Here’s Esther cuddling with Shelby, one of her two canine roommates. Esther stretched out on the couch. Esther rooting through the laundry. One picture shows Esther sitting in her kiddie pool. The caption reads: “The hardest decision I want to make today is piña colada or strawberry daiquiri.”

But Esther the Wonder Pig does more than make people laugh. Evidence of what her human guardians call the “Esther Effect” appears throughout her social media sites. “I haven’t eaten meat in three weeks and I don’t miss it,” writes one fan. “Me too,” responds another. “All I see is how awesome she is and that is the inspiration I needed.”

Steve Jenkins and Derek Walter first experienced the Esther Effect two years ago when a friend asked them to adopt the “mini-pig” she’d bought. The piglet was so tiny she fit into a cat carrier when Jenkins brought her home. But after just eight months, Esther weighed 170 pounds. A year later, she reached 500.

Esther was anything but miniature. (Apparently, it’s not uncommon for shady sellers to peddle commercially farmed piglets as boutique pets.) She wasn’t ideal for a 1,000-square-foot home in the Toronto suburbs, but Jenkins, a real estate broker, and Walter, a professional magician, weren’t about to give her up. “I’d heard so much about pigs becoming very bonded,” Jenkins says, “… and I thought she would surely die of a broken heart.”

By all indications, Esther’s days of hogging the limelight won’t end anytime soon. A book is in the works—there’s even talk of a movie—and Jenkins and Walter are planning to open an Esther-inspired farm animal sanctuary in November. In this edited interview with staff writer Ruthanne Johnson, Jenkins discusses what being a pig parent has taught him.

Besides her size, what else has surprised you about Esther?

Her intelligence. It’s mind-boggling. She can open every single door in the house and even the freezer. We installed special Esther-proof latches on the doors and moved all of the food from our lower cupboards. When we leave the house, we have to tape our freezer drawer closed.

She’s also hilarious. The other day, she bodychecked me while I was working on the lawn mower. Then she did this thing we call “pig rodeo,” where she kicks her back legs up and spins around like a bucking bronco. It was like she was laughing at herself.

How long did you live with Esther before you stopped eating pork?

It was only a couple of weeks. We had bacon on the stove. Derek was cooking. We both looked at each other, and I said, “I can’t do this.” He said, “Neither can I.” That was it. It was that easy. If it was that easy for us, then maybe it can be just as easy for other people. Maybe they just haven’t had the chance to really know a pig.

Because of her physical attributes and docked tail, Esther was likely born to a commercial breeding sow. Do you often think of the life she would have had on a factory farm?

She would have been a gestation crate pig. Those pigs have the worst lives possible. They are denied everything that Esther lives for—the attention she craves, how much she likes to play and interact with us and the dogs. It was heartbreaking in one sense but really rewarding to know she escaped that fate. What gets me the most upset is thinking about the rest of her litter, those little 10 or 11 babies just like her.

What prompted you to use Esther’s story to raise awareness about factory farming?

That happened because of how quickly we saw people reacting to her Facebook page. That’s when the change stories started coming through, from little kids to older people. Before Esther, we’d never, ever considered being vegan. We were some of those people who knew factory farming existed but had no idea to what extent. We thought that farm animals are farm animals. Derek was taught as a kid that farm animals don’t feel pain and that God put them here for food. And then we had Esther and this lightbulb went off. She was meant for that kind of life, and so she is just like every other pig. That was a real awakening.

On a lighter note, let’s talk about how Esther was housetrained.

We started with litter boxes. We just kept taking her to the litter box every hour or so when she was little. She’d go pee, and we’d give her a treat. But it became a nightmare as she continued to grow. She’d go to the right spot but miss because she was so big. We had to retrain her to go outside. Now she goes to the back door, wiggles the handle and lets herself outside.

Along with bagpipe music and scotch mints, what are some of Esther’s favorite things?

She loves any time we make a frozen fruit smoothie, especially mango. We taught her to sit for treats, so if you have anything she wants, you don’t even have to ask her. You just turn around and there she is sitting in the middle of the kitchen.

She loves to cuddle. If you start to rub her belly, she’ll go all four legs in the air. If you lie down beside her, she’ll lean into you. Our dog Shelby is her best friend. She and Esther sleep a lot together. In the morning, Esther gets up and has her breakfast with the dogs, and then they all go outside. In the summer, she’ll lie down in the pond or root around in the garden or lie with the dogs on the lawn. She wrestles and plays with us. She loves a game of tag.

She loves her treat ball. She’s way better than the dogs with it. Usually a full treat ball only buys about 15 minutes with Esther.

What have been some of your favorite messages from fans?

A 76-year-old vegetarian woman sent us a message that for the first time ever her husband picked up a pack of bacon at the grocery store and then put it down. She asked him why, and he said, “Because of Esther.” This man is just a standard, Middle America, meat-and-potatoes kind of a guy who’s worked hard his whole life. And here he is changing his diet because of Esther. I cried when I read that. We’ve had hundreds and hundreds of those kinds of messages. It’s just people falling in love with Esther.

Republished with permission from All Animals magazine, the membership magazine of The Humane Society of the United States

It has become appallingly obvious that our technology has exceeded our humanity.
Albert Einstein

We've sent daily emails for over 16 years, without any ads. Join a community of 245,316 by entering your email below.