Designing Companies That Are Loved 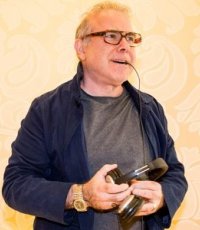 When Scott Elias lost 80% of his hearing in kindergarten, his emotional and intuitive connection to the world went into overdrive like a sixth sense. When his hearing was surgically restored two years later, the medical miracle ignited his passion for music and science which he channeled into his wildly successful 30+ year career as the CEO of the world’s largest and most-awarded audio communications agency, Elias Arts.  It's from this uniquely intuitive and empirical place that he stands against the conventional economic thinking that businesses exist simply to make a profit. Scott’s work is a force for bringing out the very heart and soul of business.  By designing for love in some of the world’s biggest companies, he’s a leading voice for the idea that business success is not the goal, but rather a by-product of offerings that fuel people to express who they are and all they yearn to become.

Scott has helped launch, grow, and re-position nearly 40% of the top 1,000 global brands through audio communications, branding, psychoacoustics, and environmental and embedded product audio.  As the co-founder and pioneering CEO of Elias Arts, the world’s largest, most awarded audio communications firm, Scott led an extraordinary team that redefined audio’s role in communication and brand strategy.  Scott and his team pioneered systems that allow businesses to harness music – which uniquely reaches directly into a highly charged, emotional dimension of the brain and creates enduring memories – in order to design and reinforce a coherent and compelling set of product or service messages and to generate powerful consumer bonds triggered by music.  Elias Arts initiated large-scale use of audio and the emotive pull of music as a means to give voice to brands – Adidas, Apple, Budweiser, Coke, Columbia, eBay, eTrade, Exxon, Nike, Universal, Verizon, Visa, Yahoo – to name just a few.  The firm to date has received 750 awards for 7500 commercial projects including 2 Emmys, hundreds of Clios, AICPs, London International Awards, and Cannes Lions.

Scott is a serial entrepreneur, investor and growth consultant.  As technology reinvented the music industry, he rode the turbulent networked world to focus on mutually rewarding business relationships as the enduring source for sustainable growth and profit. This propelled the launch of TheRelationcy, where Scott serves as Chief Growth Advisor and mentor to CEOs and CMOs of purpose-driven brands.  Since 2011, Scott also has headed up LivingWorks Ventures, a venture firm focused on seeding and sustaining the growth of "designed for love" companies, brands, and products. LivingWorks helps companies design, develop, and deliver the most reliable and effective paths to sustainable profits by aligning the organization, creating market coherence, focusing opportunity, and reducing distraction.

When, says Scott, does a brand or company succeed? When it becomes a company that people love.

As one of the earliest and most influential proponents of harnessing sound’s emotional impact as a gateway for generating heartfelt connections, Scott views marketing as a bridge for connecting the intrinsic purpose of the organization to the emotional needs and soul needs of their communities of customers. “Great marketing embraces fundamental human truths, and then helps people achieve their aspiration,” says Scott. He identifies the key components of great marketing as rich communication, rich experiences, and rich relationships augmented by tools and platforms that allow customers to form their own communities. “When all of those things come together, […] then we have what we see to be as the future of marketing which is rich commerce.”

While recent marketing research indicates that brands are increasingly becoming irrelevant as most consumers don’t care if 74% percent of them disappeared. Yet of the brands that people do care about, chances are high that Scott had a hand in launching, growing, or repositioning them. And the ironic secret to success lies in going from branding to being. Scott helps companies identify and embody their signature purpose for existing, which unlocks incredible alignment within the organization and translates into market coherence with a laser-like focus on serving the needs and aspirations of customers. With such deep attunement to their hearts, customers become community and the company thrives because it is loved.

Scott says we’re stuck in a transactional economy that dates from the WWII era—with damaging results. Messages from companies are increasingly annoying and noise-filled, fueling people to disengage and disconnect while breeding mistrust and distrust. Yet Scott is doing to marketing what he does to companies: seeing it for what it is, appreciating what it could be, and helping it become what it longs to be.

As a serial entrepreneur, Scott is a striking blend of head and heart; always looking to understand what sustains people – emotionally, physically and intellectually – then growing a business from there.

To learn more about Scott's vision and journey RSVP for this Saturday's Awakin Call with him here.

This article originally appeared in Awakin.org. Awakin.org is about deepening our self-awareness, in a community of kindred spirits. By changing ourselves, we change the world.

Everyone has a story that will stop your heart.
Claudia Shear