Sharing Stories in a Broken Culture 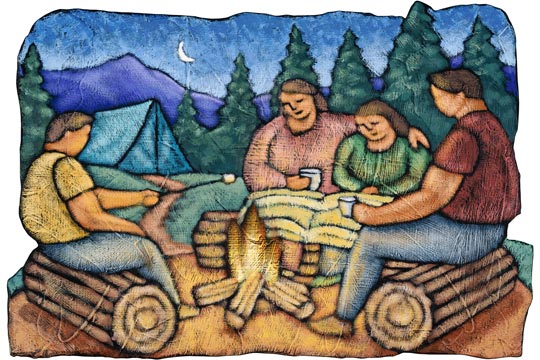 In late-April 2017 the French Presidential candidate Emmanuel Macron stunned supporters of Marine Le Pen, his opponent, by directly engaging with them on a picket line. Macron handed the microphone to union members whilst arguing that closing borders would do nothing positive for the economy, and might well harm it.

This was a rare act of engagement in western politics, where debates are characterised by the frothing of deeply divided sides. If Macron’s argument had been transmitted indirectly via the media it would probably have fallen on deaf ears, dismissed as more ‘fake news’ or standard ‘liberal bias.’ But he managed to create a relationship with people directly who he knew might disagree with him, and this direct engagement made all the difference. Physical presence has a power that goes beyond any argument. By showing that he was ready to listen, Macron also helped to diffuse his opposition. The crowd quietened and a dialogue began.

The gatekeeper of our intellect—the emotional limbic system—relies on relationship. No matter how potent the arguments, that system won’t allow more information to be processed rationally by the ‘higher’ faculties of the brain if there is no emotional connection. That means that respectful relationships are a prior condition for persuasion—a point that is lost in much current political campaigning, still more in the nightly ridicule of President Trump and his supporters by comedians on late night television shows in the USA.

The polarised cultures of Western democracy alienate one other not just through what they say, but also by how they live. These divisions are having a crucial effect on how we address issues of migration, welfare and trade. The problem is that both sides are so busy trying to fix the other that no genuine communication is taking place.

The blogger Andrés Miguel Rondón offers Venezuela’s experience as a prescription for healing this situation. It took liberals there years to realise that they themselves had become de-humanised, while in the mindset of those who saw ex-President Hugo Chavez as a champion, all talk of justice and freedom of the press fell on deaf ears because it seemed to come from an alien group.

When two sides of an argument are so entrenched, a simple exchange of facts no longer produces any forward movement. The clash is not one of opinions but of radically-different worldviews. A worldview is an emotional commitment to certain attitudes and beliefs. Most of us spend our entire lives accumulating evidence to justify a worldview. Our lives and actions then seek to express it. “We tend not to see our worldview as a perspective” says researcher Annick de Witt, “We see it as truth.”

The fundamentals of our own worldviews are no less shaky than those of the opposition, but our respective commitments run very deep. Long-time Greenpeace activist and storyteller Brian Fitzgerald puts it another way: “What is being expressed might seem crazy, but the feeling it expresses is a true experience for that person.” We may deny or reject what we see as a nonsensical argument, but in doing so we are denying what someone else experiences as truth. It’s this dynamic that feeds mutual alienation.

So what does it take to reach across our different worldviews?

First, “it takes a lot of humility” says de Witt, “We need to be willing to explore the limitations of our own worldview.” But this is a step, she admits, that few of us seem willing to take. The theatre director Peter Brook puts it like this: “hold on tightly, let go lightly.” “For a point of view to be of any use at all,” he says, “one must commit oneself totally to it, one must defend it to the very death. Yet at the same time, there is an inner voice that murmurs: ‘Don’t take it too seriously.’” It would be wonderful if more of us were willing to commit to our values, but even more powerful if we had the grace to let go. Only then could we find more common ground.

Secondly, the stories that shape our worldviews are very powerful. In the information age it’s tempting to think of the whole world as a story. If the world is a story then the perfect world is only a story away. We need only spin a message, an advert or campaign to bring about successful change.

We all know of indigenous tribes whose worlds are shaped by the stories that they’ve heard, so we believe our own storytelling will shape society too. The trouble is that the kind of stories that are told in such societies are part of a network of mythology—not media to be consumed but realities that are lived. Such stories aren’t just heard; they are enacted through ritual. Listeners become participants in ways that shape and sharpen their psyche. They don’t simply receive information; they learn new ways of seeing and being in the world. Their intuition is moulded so that they know how to act.

It will take the work of centuries to restore our present-day cultures to anything like that level of dignity and imagination. However, we can draw one vital lesson: what we are looking for is not a story but a ritual. By creating experiences that embody the world we want to live in, we allow others to participate and create their own meaning.

“It took our leaders ten years to figure out they needed to actually go to the slums and to the countryside” says Rondón, “And not for a speech, or a rally, but for game of dominoes or to dance salsa – to show they were Venezuelans too, that they had tumbao and could hit a baseball, could tell a joke that landed.”

To see how these different elements combine—relationship, humility and ritual—here’s a recent example that comes from Italy.  In 2016, a group called GoDeep! hit the streets of Grottaglie in Puglia to explore—and potentially transform—local attitudes towards migration from North Africa.

At the heart of the process was what they call the ‘appreciative gaze,’ an attitude similar to the unconditional positive regard that was practiced by the psychotherapist Carl Rogers. Rather than arriving with pre-set judgements on what needed to be changed, the group spoke to local people on their own terms. Sometimes this meant receiving openly racist abuse, but gradually ties with the community were forged.

At the end of the enquiry, a celebration of diversity was held in which both local culture and the cultures of the new arrivals were included. Those seen as ‘the other’—in this case migrants and liberal activists from GoDeep!—steadily became more of an ‘us.’ By starting with direct contact and open conversation with local people, the group established a relationship. This relationship then served to create an experience that told a deeper story of unity than words alone could tell. This story of unity was then ritualised in celebration.

First-hand experiences of this kind create more information, conversation and connections than conventional media campaigns, and they help to reduce the likelihood of judgmental behaviour and artificial separation. “In a few days we created the possibility for people from diverse backgrounds to take ownership of their local space” says Niels Koldewijn, a GoDeep! participant and the director of Elos Foundation. “It generated recognition for migrants from the locals, and importantly, migrants for locals as well.”

This approach might not be enough to persuade political hardliners, but it can help to create the right conditions for those who are ready to make a jump across the lines of difference. As one of Hannah Arendt’s favourite poems from Walter Benjamin puts it:

“…the soft water’s movement will
defy the strongest stone in time.
The hard ones, you see, are more easily undermined.”

We could imagine a wave of ritual actions similar to GoDeep! taking place worldwide, each one a potent demonstration of the open, tolerant world we want to create. Enacting unity through public works, participatory theatre and even cups of tea would mean that we’re not just telling a story but creating it together—and doing so in ways where everyone’s invited.


This article is syndicated from openDemocracy. openDemocracy is an independent global media platform publishing up to 60 articles a week and attracting over 8 million visits per year. It seeks to challenge power and encourage democratic debate across the world. Author Simon Hodges is the director of Storyourself, which activates storytelling for campaigns and organisations. His writing and training unite his twin passions of oral mythology and cultural transformation.

Loneliness and the feeling of being uncared for and unwanted are the greatest poverty.
Mother Teresa