Home > News > The Price on Everything is Love

The Price on Everything is Love 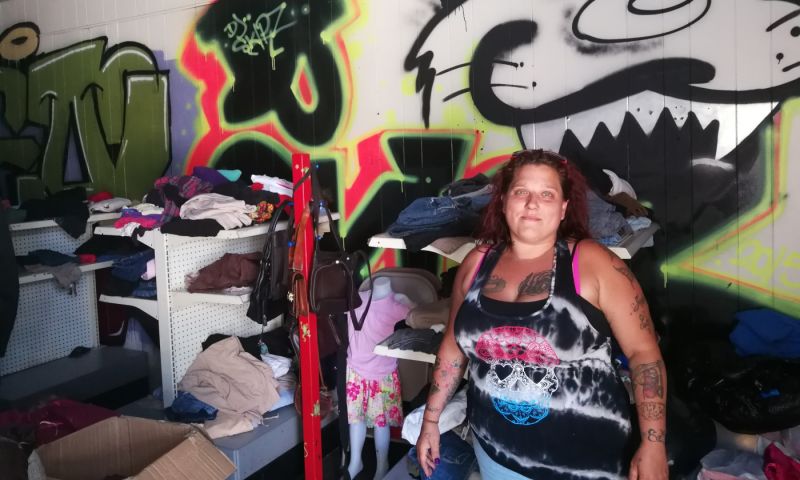 A multitude of voicemails and text messages from desperate neighbors flooded Jessica Ramirez’s cell phone on a brisk morning in October 2013. Winter was coming.

Using social media to reach potential donors as well as those seeking help, Ramirez created a makeshift donation center on the sidewalk outside her Southwest Detroit home. There, the community organizer and her neighbors handed out warm clothing to children and recycled beds, dressers and microwaves to new mothers who needed furniture.

When school began the next year, she was at it again, donating reams of school supplies she had collected from businesses and individuals. “Everything was being done out of my home when I started,” Ramirez says.

Recognizing her efforts, the property manager of an abandoned local storefront gave her use of the facility. That’s when her charitable acts became a community shop—Detroiters Helping Each Other (DHEO)—where kindness and generosity, not money, is the currency of exchange. Their motto: Teamwork makes the dream work.

“I would love to see us not need this anymore,” she says.

“In the meantime it’s showing people the community still cares.”

Decades of economic and population decline, a depleted tax base, and critically underfunded city services have forced Southwest Detroiters to self-organize, establishing a local network of goods and services to fill in for missing city services. The result is a range of neighbor-to-neighbor efforts, like DHEO, that seek to address broader needs that are going unmet by local government agencies.

The Congress of Communities, for example, is a charitable programming organization that, among other things, offers anti-domestic violence trainings to Southwest Detroit residents in 2010. The trainings aimed to improve public safety at a time when it took police nearly an hour to arrive at a crime scene.

A coordinated effort called Detroit Mowers Gang organized volunteers with gloves and protective eye gear to mow overgrown grass in the city’s abandoned lots and public playgrounds. The so-called weed vigilantes get together every other Wednesday to do what the city doesn’t, calling itself a “crafty crew” that refuses to let budgets and bureaucracy stand in the way of unruly grass on a playground getting cut.

And the Detroit Black Community Food Security Network, organized educational programs for youth and adults, and operated a food co-op to ensure Detroiters had access to affordable, nutritious and culturally appropriate food. Its ongoing work includes a food council that promotes a sustainable food system and advocates for food justice and food sovereignty in the city.

“The price on everything is love, man,” says Rico Razo, a native Southwest Detroiter and a former mayor-appointed district manager tasked with ensuring city services respond to residents’ needs.

“It’s spreading love through giving with the hopes that the people they’re helping out—if they catch someone else who’s on hard times—that they pay it forward. That’s the model that [DHEO] rolls with. I think it’s been successful.”

Three years ago, the city of Detroit named DHEO “Organization of the Year” for its role helping families recover from a fire that burned seven homes to the ground, just blocks from Ramirez’s home. Her generosity has extended beyond helping people in need. She collected a U-Haul truck of dog food to feed 369 of her neighbors’ dogs and donated straw to keep their kennels warm during Detroit’s cold months.

She shares stories about DHEO’s work on social media, so that donors can see who they’re helping.

She vets people who say they are in need to make sure no one is taking undue advantage of the community’s generosity. “We do our homework,” she says.

She has asked for a police report in the case of a family replacing items they say were taken in a home burglary or documentation when a family asked for a donated bed to keep their children out of Child Protective Services.

But Ramirez says a family’s inability to produce any of those things won’t be a hindrance to receiving help. And ultimately, the organization relies on trust between neighbors in the community and the social networks that underlie it.

“Yeah, they get stuff for free,” Ramirez says. “But we can call recipients up and say ‘come volunteer.’ If they’re able-bodied, we tell them ‘hey go cut the elderlies’ grass’ or ‘show up to a community feeding event.’ And they show up,” she says.

Razo said that for the longest time when the city cut back on services, including trash pickup, streetlights, and lawn maintenance, he saw self-organized community initiatives and nonprofits offer food and healthcare to people in need. After-school programs and summer jobs for high school students emerged as well as job training and job readiness efforts.

City and state government services are rebounding but the hope is they won’t threaten what neighbors have already built to save their communities.

Rather, Razo said he believes the city should look to them and partner with them to remove some of the burden and empower them to continue. He’s said he running for state representative to the Michigan Legislature on a platform that seeks to bolster Detroit’s community-based sharing economies, especially by integrating them into city services.

“They don’t do it for us,” Ramirez says of business and city government. “The community takes care of itself without the suit and ties.”

This article was funded in part by a grant from the Surdna Foundation. This article is syndicated from YES! magazine. YES! Magazine reframes the biggest problems of our time in terms of their solutions. Online and in print, we outline a path forward with in-depth analysis, tools for citizen engagement, and stories about real people working for a better world. Kevon Paynter wrote this article for YES! Magazine. Kevon is the Surdna reporting fellow for YES! Follow him on Twitter @KevonPaynter.

Life and death are one thread, the same line viewed from different sides.
Lao Tzu

We've sent daily emails for over 16 years, without any ads. Join a community of 246,409 by entering your email below.