Letters from a Tibetan Colony

Sriram Shamasunder is an Assistant Clinical Professor of Medicine at UCSF, and co-founder of Heal Initiative. He completed his Internal Medicine residency at Harbor UCLA. He has worked extensively in Rwanda, Liberia, Haiti, Burundi, and India. In 2010, he was named an Asia 21 fellow as well as the Northern California Young Physician of the Year. The piece below was originally published in the October 2006 edition of New Physician. 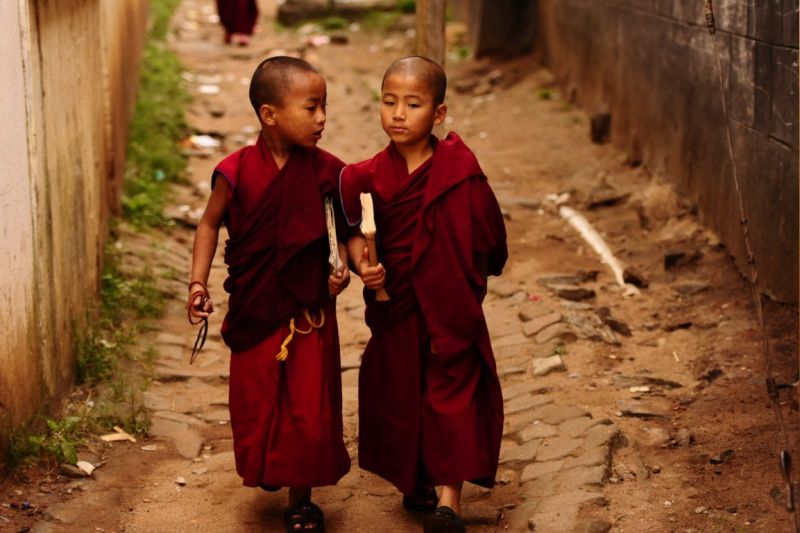 The largest Tibetan refugee colony in the world lies five hours from where I spent the summers of my childhood at my grandmother’s house in Bangalore,India. Neither my mother nor my father nor most of my Indian relatives who grew up in Bangalore knew of its existence despite the fact that it houses over 10,000 refugees. Half of the residents are Buddhist monks and nuns. I first heard about the colony when I decided to spend a part of my final year in medical school abroad in India. I wanted to experience rural medicine in India and understand the barriers that prevented the poor from receiving adequate health care. I also liked the idea of returning to my ancestral home state of Karnataka, and improving my Kannada. The hospital was attempting to serve the Tibetan refugee population and desperately needed medical volunteers. I was unsure how much Kannada I would use but the location was rural, in Karnataka, and would allow me the chance to work with a refugee population that had been in India for generations.
---

I spent the first night in Bangalore at my cousin’s house and the next day left early for Bylakuppee. After passing through the smoggy, congested streets of Bangalore, we entered village after village where crowds poured out into the streets and hot dust mixed with the hum of the simultaneous Kannada spoken soft and loud and almost sung in every corner store shop. After about the four hundredth tea stall and street food daba, we reached a stretch of the greenest forests and farmlands. Somewhere in that stretch of farmland and open green road the climate changed from the sulky suffocating heat of April in South India toa cool about to rain comfortable. And somewhere along that stretch of road the color of the faces changed from a rich, beautiful brown of my familiar knowing toa lighter yellowish East Asian undertone. The eyes changed. Just as the faces changed, there rose out of the green earth four or five massive Buddhists temples and universities in a row spread out and separated by about ½ mile each.
----
I found out quickly that I had entered a place with entirely different notions about life purpose and productivity. Soon after I arrived I pointed out to a monk that a mosquito was sucking his blood. He nodded in acknowledgement and said something brief about the accumulation of merit and allowing another being to nourish itself off your own. (Luckily, we were in a region where the prevalence of malaria is low). The second day I was there, a monk took me to the local Indian restaurant. A fly fell into my daal. The monk’s reaction took me by surprise. I wrote this poem about it.
-----
For my friend who says the way the world works has broke her heart: good news from the subcontinent. Living with the monks study #1
----
There are those who
When a fly drops Plop! into yellow daal
it is not their bowl of food they worry about.
It is the fly and her wings
The ability of fire and spice
To sear wings
And with so much kindness
They place the fly in their palm
Unfold a white creased napkin
Clean the wings and the space
Between the wings
with water rinse away
Any hot yellowness
Place the fly gentle
On the edge of the table
Until
by the end
Of our meal
The fly has flown
made her way
Back into the world
----
I worked in fourth camp where there were over 3000 monks and 600 nuns, mostly between the ages of 5 and 25. They attended the large Buddhist school in the colony which did not teach math and science, only Buddhist philosophy. Children were separated by their proficiency in Tibetan. As a result 15 year olds are placed side by side with seven year olds. Most of the monks and nuns came from Nepal, Bhutan, Darjeeling,Sikkim, and Tibet. They came for a variety of reasons. Some of the older teenagers came out of conviction and interest. The younger children were sent by traditional Buddhist families who believed it was auspicious to have at least one family member become a monk. Still other families were very poor and knew that sending their child to a monastery or nunnery would at least guarantee that they would receive three meals a day.

To go along with my many new experiences, the hospital was like none I had ever seen. There was no doctor. None at all. The doctor who had been there for a few months was a retired ENT doctor who wanted to make some extra money at the camp. He was from the city and did not stay past two months. Without a steady physician, the hospital had not been useful for the monastery or nunnery trying to take care of their population.
---------
As the hospital struggled to get off the ground, Sherap Lama, a 30 year old monk from Sikkim decided some form of health care was necessary for the young monks. He was a schoolteacher at the Buddhist school and saw so many oozing pus filled ears, belly aches, bald spots and six children die from unknown causes that he attempted to start a clinic. About a year and a half before I came to the colony, he obtained a copy of the book Where There Is No Doctor and studied it. He raised money to buy some medical equipment and medications to treat the young monk school children. His clinic consisted of keeping semi-hygienic conditions in the monastery. Boys were clumped together 14-15 in a small room to sleep. Monks or not, groups of young boys with parents nowhere insight do not willingly wash. Before Sherap set up a spare room as a clinic, the community would say the stray dogs looked better than the children.

Sherap made enough progress in his project that the nuns soon grew interested. Sherap taught Ani Dichen, a young nun from Nepal about what he learned and she soon started a similar clinic for the 600 nuns.
--------
I spent my mornings at the monk makeshift clinic and my afternoons at the nunnery clinic. At seven in the morning the young monks would line up to see me. In my first week there at the clinic I met a young 14 year old boy, coughing up blood. I soon realized that crowded sleeping conditions caused the quick spread of serious ailments like tuberculosis. More and more boys with chronic coughs and blood tinged spit started to present themselves. This meant that I had to come up to speed on the protocol for treating TB patients in India. I learned of the WHO recommended plan called the Revised National Tuberculosis Control Programme which was orchestrated throughout the country by the Indian government and financed with a loan from the World Bank.
-----------
The closest government distribution of medications was about 10 minutes away by auto, in first camp. I immediately went to speak with theIndian government doctor in charge of the local program about the high rates of tuberculosis I had noticed. He knew the reality of fourth camp well. He was aware of a 22 year old monk who had been left partially paralyzed and that TB had spread to his spine. He was well aware six other monks had started treatment after they began coughing up blood and another three were dead of an “unidentified sickness”. These outbreaks took place within a year in a population of 3000. He knew that treatment in fourth camp was sometimes sporadic and continued isolation of the infected monks was not maintained with regularity.
--------
With highly effective treatment so close by it seemed unacceptable to me that so many cases of tuberculosis should go undiagnosed and not treated properly. He stated that the Tibetans were non-compliant by nature and difficult to keep track of since they regularly travel through India and between different Tibetan colonies all over the country.The reality, however, was that although the government had provided state of the art treatment there was no doctor or health care worker on site in camp four to diagnose TB. Sherap and Ani Dichen had been extremely proactive in starting their own makeshift clinics. No government program was in place to train them to recognize the symptoms of TB. The result was that many monks would continue to go undiagnosed until they coughed up blood and came forward on their own accord. Meanwhile, before getting treatment they were likely to spread TB to those sleeping less than two feet away from them.
--------
If a monk can show so much concern for the fate of a fly surely we can muster up enough courage to stop the death of those dying needlessly in front of our eyes. As my short month came to an end it became obvious that in this historical moment the requirements of being a real deal effective doctor goes up hundredfold.
--------
Doctors must understand structural inequality and their underpinnings. We must understand the politics of funding projects, where the money comes from and where it is being funneled towards, and to what end? We must start one on one, patient by patient and expand out to include so many things we never thought were medicine. Poverty, race, class. World Bank funding practices. If only out of necessity, because our patients’ lives depend on it. We must tell the stories again and again of who died and what commitment financial or otherwise could have prevented it. We must understand who is vulnerable and why? Who becomes sick and why? We must strive to be doctors and advocates. Doctors and organizers. Doctors and policy makers. Doctors and journalists.
---------
Of so much good news from the subcontinent, the status of TB in the Tibetan colony is not one of them. But the key, I think is to make it news. If it becomes news, maybe it will turn good. As the poet June Jordan says “We are the ones we are waiting for.” There are so many Sherap Lamas and Ani Dichens who are ready and willing. I hope to be among them.

Sriram Shamasunder is an Assistant Clinical Professor of Medicine at UCSF, and co-founder of Heal Initiative.

It is in the shelter of each other that the people live.
Irish Proverb