A Kindergarten Student Keeps Her Promise 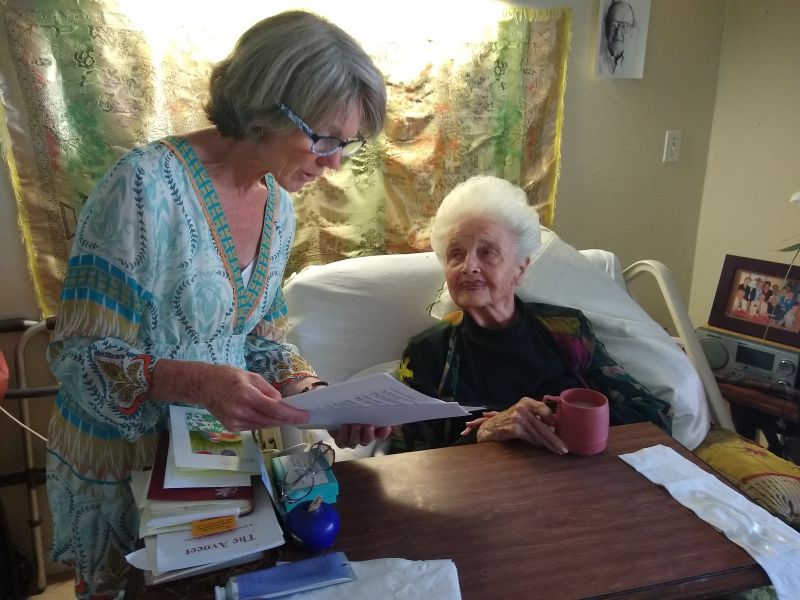 In 2012 not long after ServiceSpace founder Nipun Mehta gave his viral commencement speech, Paths are Made by Walking, ServiceSpace received the following email:

I thoroughly enjoy your work. Just today I forwarded your graduation speech to my old class...Meanwhile I want to alert you to a remarkable woman, Betty Peck, who at 90+ exemplifies so many of the qualities you write about in your columns. She happens to be my mother. I highly recommend coming to tea at her home and meeting her.  Will you come? Thursdays are Salon- "cultural exchange through conversation"  and tea is at 4 daily.
Sincerely,
Anna Rainville

The email was forwarded to a few ServiceSpace volunteers, among them Anne Veh, who responded with, "Betty Peck was my kindergarten teacher! She is one of those mentors that I think of so often in my life. I would love to join a group for tea, and an interview. My heart is bursting. I would love to be of service."

And so it happened that within the span of a couple of weeks a dozen ServiceSpace volunteers (including Anne) showed up at Betty Peck's home on a Thursday for tea in her garden.  It was a magical afternoon. Entering the green tangle of Betty's garden was akin to tumbling down the rabbit hole into Wonderland. A place where time didn't quite stand still but instead did cartwheels in joyful circles. A place where even the most crabbed among us would feel, despite themselves, a certain undeniable springtime in their soul. A place of swerving paths, inviting benches and riotous shrubbery. A place studded with beguiling statuary, a tree house, a fairytale tower, a flurry of white doves, and quaint hand-lettered quotations to surprise and inspire you -- like this one -- The Garden is the Source of All Life, and the Basis of All Art. In the back an extraordinary ivy-shrouded amphitheater curled around an old tree, complete with a Romeo-and-Juliet balcony, a gurgling creek, and even a wooden train station where children of yore could buy tickets for a whirl on a working train that circled the property.

Almost five decades since they had last seen each other and Betty, radiant and smiling, did not miss a beat, stretching out her arms to Anne,  "Is this Anne, my former student?" Anne vividly recalls the moment, "As everyone bustled around us, Betty remained so focused and present. Beyond the words, there was something deeper being communicated, a language of love."

The tea party gathered under the gnarled oaks around a table festooned with wildflowers. Betty queenly in purple, long beads around her neck, her snow white hair like a coronet, played gracious host,  her gentle daughter (a gifted educator and visionary in her own right) and doting husband (an acclaimed writer and historian) by her side.  Stories, songs and blessings were shared spreading a cloak of sunlit reverence over the afternoon.

"You have to be connected with the Earth," Betty says emphatically, adding with a smile, "I feel so dedicated to that now that I am in my 90's and approaching the Earth more and more every day."

She shares stories of being invited to teach kindergarten and accepting on two non-negotiable conditions: That her kindergarten room be equipped with an oven to bake bread in, and have a door that opened to a garden. (She was given both).

"You see the kindergarten teacher must have this love of life that vibrates and their children feel it," says Betty. Where did her love of life come from? It is hard to say for certain, but she shares this story that seems to hold part of the answer: "During the Depression, nobody could pay their rent. So my father moved up from San Francisco up to Modesto where his farm was, he had 40 acres. And my mother took one look at the house and said, "It's much too small for me and my six children. Have the men bring the hay wagons up and we will sleep on the hay. So they pull these hay wagons up. Here we were on this wonderful alfalfa, high up under this black night sky, with the meteors going across like this. So here we were and at that moment I became one with the universe."

A short poem her husband Willis dedicated to her is read to the group:

To a Liberated Wife

To that Womanhood without which there is no manhood.

To that independence without which there is no belonging.

To that love without which there is no mystery.

May that mystery never be solved.

Over the intervening years Anne Veh would return several times to her beloved teacher's home, creating new ripples of inspiration with each interaction. On one such visit she was given an unusual assignment: to share Betty's Magic Mirror with the world. With the help of friend and fellow filmmaker Rajesh Krishnan, share it she did.  DailyGood and KarmaTube recently featured their beautiful short film: Betty Peck's Magic Mirror that within the span of a little over a week has received over 11,000 views from people all over the world.

It has been over six years since the email Anna sent out that led to teacher and student reconnecting. Betty Peck is now 96, and has moved into a home where she has 24 hour access to specialized care and can be regularly visited by family and friends.

Last week armed with a batch of her freshly made, trademark granola, a hand-crafted heart wand from Joanie (another former student of Betty's), and a print out of all the comments and emails viewers of the Magic Mirror had sent to Betty, Anne made the nearly two hour drive from her home to her teacher's bedside. There she found Betty sitting upright in bed, her white hair crowning that familiar face, her eyes bright with anticipation and welcome. "Oh Betty," exclaims Anne, "You look so beautiful!"

Anna and her loving community have helped turn Betty's room into a vivid sanctuary of joy, beauty and inspiration. There is a collage of photographs, handwritten notes, and paper butterflies on the wall in front of her bed. A photograph of Willis (who passed on in 2013) on the wall behind her. "He always invited me to go with him, but he didn't this last time. So I put him there where he can watch over me," explains Betty. Bouquets of roses crowd a corner table. There are piles of books within reach. Stargazer lilies. A pot of honey for tea. Vibrant cloth hangings transform the walls. On her bed is a beautifully embroidered comforter of well-worn green silk from a friend.

"Isn't it amazing that at the age of 96 life is still opening up to me?" exclaims Betty. She talks about starting a discovery book for herself (but that is a story for another time), she talks about her deep concern that children are no longer learning cursive in school. How she wants to sit down with teachers and parents and remind them why, "Children must learn to use their hands, must be reminded how in life one thing connects to another the way cursive letters do, should be taught the art of writing beautiful Thank You notes." She points out a hand-written card from an old student. "He is 79 now, and he still takes the time to write and come visit me! Can you imagine that?" Knowing Betty it is not a hard thing to imagine. 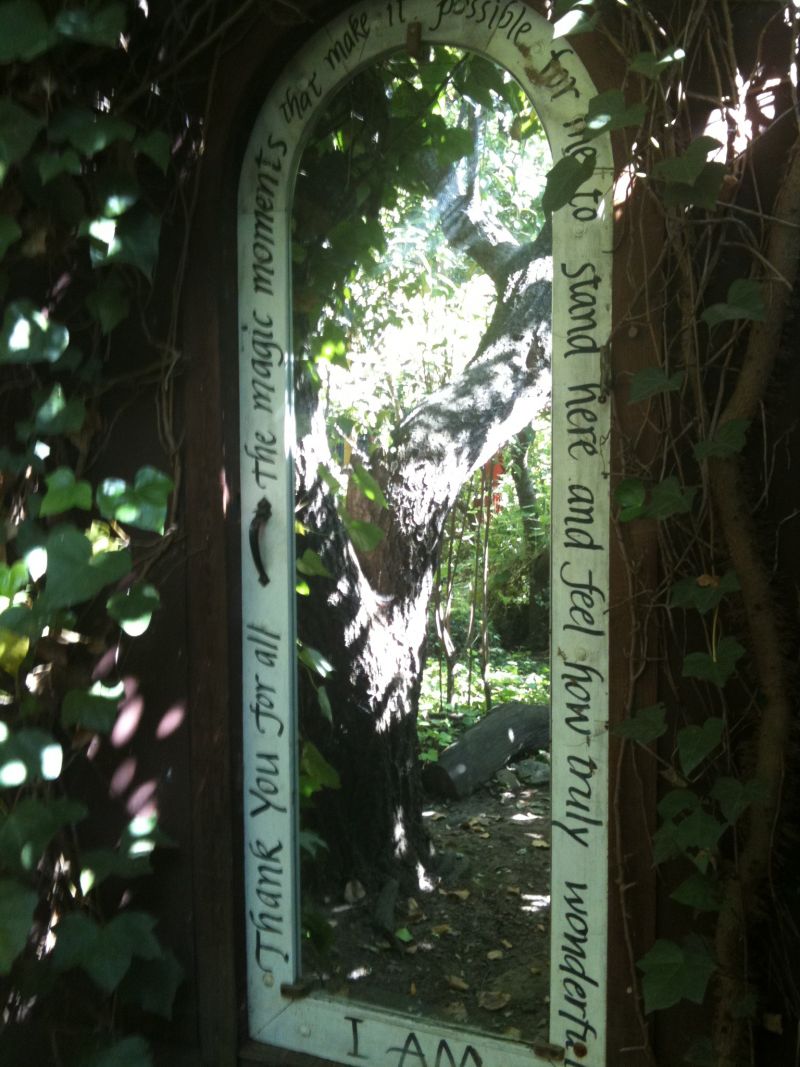 The Magic Mirror in Betty's garden, a version of the one used in her Kindergarten class

The Magic Mirror video is pulled up and Betty watches it with Anne by her side. Her face lights up as a sequence of beautiful shots from her garden fill the screen, her eyes widen with recognition at the archival photos from her Kindergarten classes, she calls out the names of the children (long since grown) in them. "How did you know to gather all these photos?" she marvels at Anne. She nods her head in emphatic approval, listening to her own words on how important it is for a teacher to place her hand gently on the unhappy child's head or shoulder, as they are gazing into the Magic Mirror, how it can melt something troubled within. "I am glad you included that. Touch is so important." She is awestruck by how the technology of film and the power of the internet have carried her powerful Kindergarten tradition into so many thousands of hearts and minds around the world.

Anne reads aloud to her the emails and comments from viewers -- (from so many of you!). There are messages from other kindergarten teachers, non-profit leaders, community center directors, parents, and grandparents, there are notes from people who had visited Betty's garden as children, there are commitments from people who want to create their own magic mirrors for their homes, schools, or workplaces. "You know Anne," confides Betty, "When you said you would help share the Magic Mirror, I wondered how on earth you were going to manage to get all those mirrors into your car and drive them around! I even went to the local mirror shop to find out how much the mirrors cost. And they are $28. I couldn't imagine how you were going to do it! And look -- you found these tools, and you found people to work with...Thank you." Betty kisses her finger tips and tosses them into the air. It is a gesture she uses often to convey a gratitude for, and recognition of the beautiful forces that act upon our lives.

"I am so glad," says Betty, her voice clear, and kindergarten-teacher-crisp, "that we were brought together to remind people what is possible -- when we open our hearts to love."

Empty pockets never held anyone back. Only empty heads and empty hearts can do that.
Norman Vincent Peale