Home > News > How Books Solace, Empower and Transform Us

How Books Solace, Empower and Transform Us

Galileo considered reading our sole means of having superhuman powers. For Kafka, a book was “the axe for the frozen sea inside us”; for Anaïs Nin, the alarm to awaken us from the slumber of almost-living; for Gwendolyn Brooks, “meat and medicine and flame and flight and flower.”

Since the invention of the printing press, books have fed the human animal’s irrepressible hunger for truth and meaning, and some of the most celebrated exemplars of our species have extolled reading as a pillar of our very humanity. Among them is Rebecca Solnit — one of the most lyrical and insightful writers of our time.

In her beautiful memoiristic essay about how books saved her life, Solnit observed that “the object we call a book is not the real book, but its potential, like a musical score or seed.” In childhood, when life itself is pure potential, a book becomes potential squared. Solnit speaks to this exquisitely in her contribution to A Velocity of Being: Letters to a Young Reader (public library) — a labor of love eight years in the making, comprising 121 illustrated letters to children about why we read and how books transform us from some of the most inspiring humans in our world: artists, writers, scientists, philosophers, entrepreneurs, musicians, and adventurers whose character has been shaped by a life of reading. 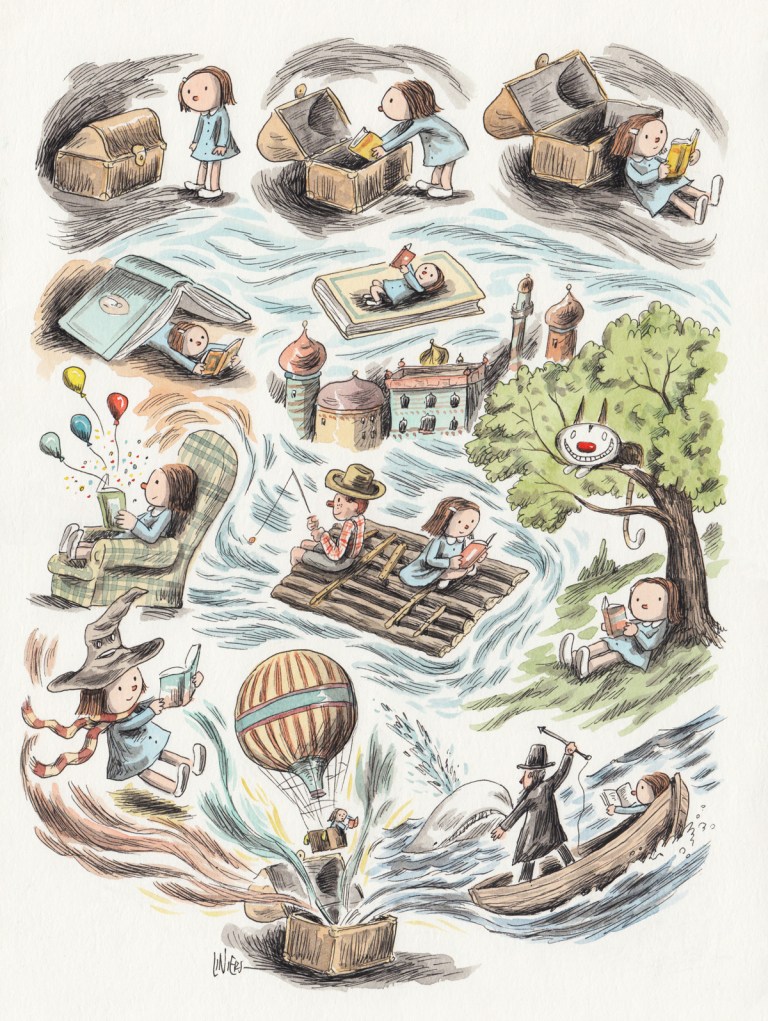 Art by Liniers for Rebecca Solnit’s letter from A Velocity of Being: Letters to a Young Reader, edited by Maria Popov and Claudia Zoe Bedrick.

Nearly every book has the same architecture — cover, spine, pages — but you open them onto worlds and gifts far beyond what paper and ink are, and on the inside they are every shape and power. Some books are toolkits you take up to fix things, from the most practical to the most mysterious, from your house to your heart, or to make things, from cakes to ships. Some books are wings. Some are horses that run away with you. Some are parties to which you are invited, full of friends who are there even when you have no friends. In some books you meet one remarkable person; in others a whole group or even a culture. Some books are medicine, bitter but clarifying. Some books are puzzles, mazes, tangles, jungles. Some long books are journeys, and at the end you are not the same person you were at the beginning. Some are handheld lights you can shine on almost anything.

The books of my childhood were bricks, not for throwing but for building. I piled the books around me for protection and withdrew inside their battlements, building a tower in which I escaped my unhappy circumstances. There I lived for many years, in love with books, taking refuge in books, learning from books a strange data-rich out-of-date version of what it means to be human. Books gave me refuge. Or I built refuge out of them, out of these books that were both bricks and magical spells, protective spells I spun around myself. They can be doorways and ships and fortresses for anyone who loves them.

And I grew up to write books, as I’d hoped, so I know that each of them is a gift a writer made for strangers, a gift I’ve given a few times and received so many times, every day since I was six.

For more loveliness from A Velocity of Being, all proceeds from which benefit the New York public library system, peek inside the book and savor one of the most moving letters from it — a 100-year-old Holocaust survivor’s true story of how a book saved actual lives — then revisit Solnit on rewriting the world’s broken stories, our mightiest force of resistance, and what it means to live with lucid hope in hard times.

Syndicated from Brain Pickings . Maria Popova is a cultural curator and curious mind at large, who also writes for Wired UK, The Atlantic and Design Observer, and is the founder and editor in chief of Brain Pickings (which offers a free weekly newsletter).

In order to learn the art of dying , one must know completely -- the art of living.
S. N. Goenka

We've sent daily emails for over 16 years, without any ads. Join a community of 243,687 by entering your email below.