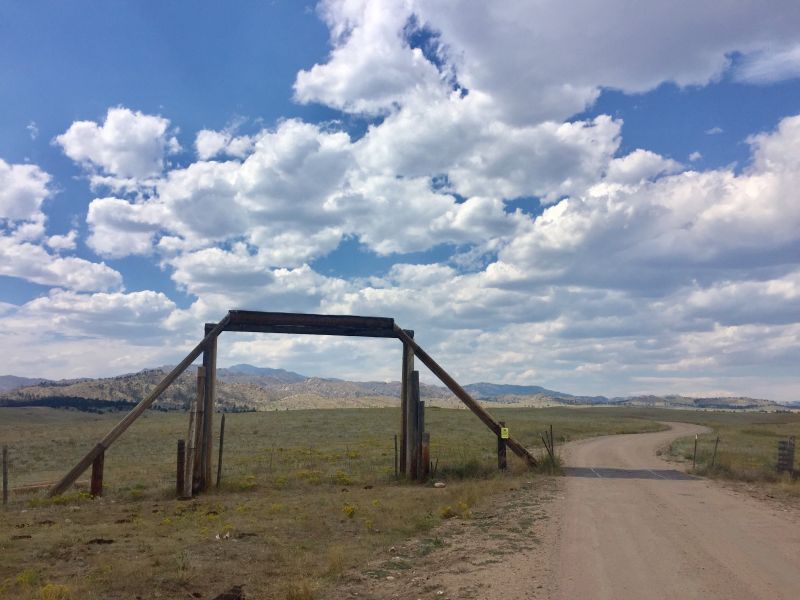 A few years ago, I was invited to visit a bison ranch in eastern Wyoming. I was dating this new guy named Mark, and as we got to know each other he kept talking about this place that had been in his family for three generations. He talked often about how much he loved visiting the ranch: going for hikes; sitting out in front of his cabin and watching the symphony of nature; looking for wildlife, and even catching a mountain lion or a bear cub on his motion-sensor camera that was tied to a tree; setting out even in the dead of winter when his snowy hikes were sheathed in silence. He told me how dearly he wanted me to see it. It became clear to me that this place held a mighty special place in his heart. I sensed that I wouldn’t really know him until I knew the ranch.

I was intrigued; so, a few months later, we went. On a warm August day, we pulled off the interstate and onto a winding dirt road that stretched across a giant, sloping meadow. Bright white, billowy high clouds dotted the enormous blue sky above us. The sunlight was crystal clear. Our tires crunched over gravel until we came upon the wooden archway marking the entrance. My mouth fell open: this was more stunning than a movie set.

The ranch, it turns out, is no ordinary ranch. It is a 13,000-acre property nestled next to Laramie Peak that Mark’s grandfather bought in 1945. It is made up of hills and valleys, meadows and creeks, plains and buttes, caves and waterfalls. Sage and cheat grass cover the ground, and pine trees spring up near the hills. Giant granite boulders give way to cliffs and streams. All kinds of wildlife live there: bison, elk, whitetail deer, coyotes, pronghorn antelope, mountain lions, bears, foxes, bobcats, porcupines, prairie dogs, rattlesnakes, ravens, magpies, bald eagles and more.

It used to be a cattle ranch. But twenty years ago, they sold all the cattle, took down all the interior fences, said goodbye to all the vaccinations and inseminations and branding and herding… and bought a herd of buffalo. The thing about buffalo is that they are so massive and powerful and un-tame-able that on a bison ranch, you just let them roam free. You just let the land be the land, and the animals be the animals.

At the time of this visit, I had been working as a faith-based climate advocate for several years. I had spent a lot of time poring over charts and graphs of projected greenhouse gas emissions and climate impacts, and to tell you the truth, my faith in humanity was starting to waver. I was weary from my continuous gaze into despair.

But this ranch was a tapestry of ecological beauty. It was land that had been basically untouched for thousands of years. It was a place I thought didn’t exist anymore. After all the work I had done looking at the long, slow erosion of nature, the experience of spending time in this unspoiled landscape was transcendent. It showed me that despite everything, nature lived. And it showed me that in the midst of my concern, I had forgotten to embrace the beauty of God’s creation.

Charles Eisenstein is a philosopher and author who is turning out to be one of the prophets of our age. He talks about an entirely new way to approach the climate crisis. He says that environmentalists have spent way too much time focusing on carbon dioxide as the problem. He says that we need to have a much bigger lens—we need to be protecting entire ecosystems of biological life. He says, in fact, that the only way we can heal the earth is to recognize our interbeing with all living things.

Our society has tended to think of the earth as inert, lifeless, able to be turned to our will. We’ve removed mountain-tops, clear-cut forests, dumped plastics into the oceans, turned prairies into farmland, spewed pollution into the air. As if we could do whatever we wanted and the earth would never notice, never feel, never talk back.

We humans haven’t been doing so great either. Many of us feel great discouragement… anger… hopelessness. Whether it’s the environment, or our communities, or our political discourse, we know that there is great pain and injustice in our world, but we don’t know what to do. It’s too much to take in. We’ve heard enough. So we turn on the TV again; we turn on YouTube; we play on our phones. We go numb.

But now people are beginning to reclaim old and ancient ideas that the earth is alive- and sentient. That life lives in many forms all around us. That reality is perhaps not as inert as we thought it was.

How would it change it for us if we knew the earth was alive? Can you imagine walking out into a landscape and feeling that it was all alive all around you, and conscious of your presence within it? We would feel incredible wonder. We would probably also feel incredible pain, when we understood how much this being was being harmed. We would also feel incredible love for this resplendent, abundant, unfathomably interlocked and beautiful creation. I don’t think we would not be able to inflict pain on it anymore. Our natural response would be to restore it, to heal it. Think of a child – if he fell in front of you and skinned his knee, how could you resist enfolding him into your arms and soothing his cries?

Eisenstein says that if we want to heal the earth, we have to awaken to love and beauty and pain. In other words, we have to awaken from our numbness and start to feel our feelings about our changing landscapes. That’s going to hurt; but it is the only portal out of the mess we’re in and into a new stance of active healing. The ecological crisis we are in presents a radical moment – for ourselves and for civilization: it is an opportunity to choose healing.

Turns out the ranch has already warmed 3 degrees over the last century. By the year 2100, it will be hotter and drier for more of the year. There will probably be less water in the streams, and less grass growing for the bison. There will probably be more pests in the trees and plants… and it might be scorched by wildfire. A lot of the abundant wildlife might disappear. This is an almost unbearable heartache for me to admit… but I think that I must feel this grief in order to move through it.

Eisenstein says that we need to take hold of a “New Story” in how we understand ourselves and the world we live in. That new story involves the recognition that we are radically interconnected with all of life. From the Arctic Circle to the Platte River to the Amazon rainforest to the tallgrass prairie-- our being-ness depends on the earth’s being-ness. We have to look at the whole picture, not just greenhouse gas emissions. We have to protect entire ecosystems by building soil health, protecting forests and wetlands, expanding wildlife refuges on land and sea, banning plastic bags, using renewable energy, building smaller homes in higher density communities; creating economies of reuse, upcycling, and gift; embracing a bicycle culture; and planting gardens in all our yards. …. These are just a sampling of the practices that will take us to a new story of civilization.

I went to a retreat in San Francisco last year that was led by the Buddhist eco-philosopher Joanna Macy. At one point she had us do an exercise in which we had to imagine that we were talking to someone from seven generations into the future. So we did a role play, and a young woman sat down in front of me. First, she asked me what it was like to live at this time in history, when there was so much degradation, conflict and fear. I tried to find the words to describe it but I was just filled with pain. Next, she thanked me for the efforts that my generation took to ensure a healthy life for her. She asked me what I did to contribute to the turning to a new story. I was almost speechless…. Did I even have an answer? Had I done anything that made a difference? But there she was, waiting for an answer, calling me to accountability for the future. And so I told her: I decided to believe in hope. I decided to believe in people. I decided that I wouldn’t give up. I decided to put one foot in front of the other.

We’re not going to reverse climate change, but there will be a future, and that future will contain good and loving and just pieces. And I know that my job, no matter how depressing the climate reports are, no matter how strangely the weather behaves, is to contribute to the through-line of love and justice. My job is to love for seven generations into the future. And I think that’s your job too. Can we love the people and the creatures who are going to live right here in the year 2229? How would that change what we do if we were conscious of them every day?

On the last night at the ranch, after dark, Mark and I piled into the pickup truck and drove up out of the valley and around to high, flat meadow. He ditched the dirt road and once again drove out over the scrubby grass, until he stopped the truck in the middle of nowhere. The inky black night surrounded us. We tossed some cushions on the ground, switched off the headlights, and lay down on the earth. My breath caught in my throat as I looked up. Across a gigantic sky that stretched from one flat horizon all the way to the other was a denseness of sparkling stars I had never witnessed in my life. They were big and bright, small and faint, some clustered together, some spaced apart, some falling effervescently, some twinkling yellow or orange, the long thin cloud of the Milky Way pointing to realms we could not fathom—there was not a thing to obscure our view of this galactic opulence on this moonless night. It actually felt like we were on the bridge of a spaceship, deep in outer space, and I had the sensation that I might fall in.

That first trip to the ranch broke my heart open so much that when we drove away, I wept for an hour. That Mark guy is now my fiancé, by the way. And together we are going to do our best to care for that land until the day we die: hearts open.

Let’s all have the courage to open our hearts to see, to feel, and to love for seven generations into the future. The healing of the world may depend on it.

Kim Morrow is a minister and sustainability consultant who has worked at the intersection of spirituality and ecology for many years. She lives in Lincoln, Nebraska.

I am confused by life, and I feel safe within the confines of the theatre.
Helen Hayes