Bringing Back the Delight of Poetry 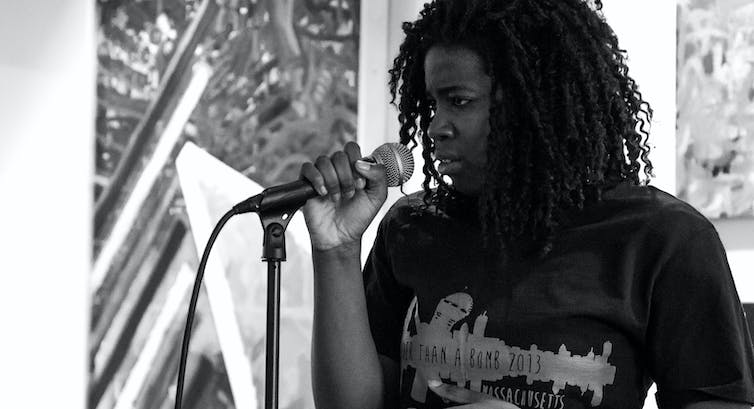 A student performs at the 2013 Louder Than a Bomb slam poetry competition in Boston, Massachusetts. John Tammaro / flickr, CC BY-ND

The American poet William Stafford was often asked by friends, readers, students and colleagues: When did you become a poet? The response he regularly offered was: “The question isn’t when I became a poet; the question is when other people stopped.”

Stafford was articulating what many poets believe: that the roots of poetry (rhythm, form, sound) go far back – both personally and culturally – “to the crib” and “to the fire in front of the cave.”

No surprise, then, that children delight in the pleasures of lullabies, nursery rhymes, chants and jingles. They bounce, clap, dance – responding in ways that involve their whole bodies. Yet as they get older, their delight in poetry often fades. Their pleasure in language and form lessens. In Stafford’s words, they stop being poets.

How have schools been part of this evolution, and what can they do to bring back delight?

History of poetry in schools 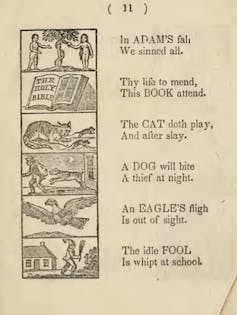 Excerpt from the 1777 ‘New England Primer.’ The Federalist Papers Project

Historically, poetry has played an important role in the curriculum of U.S. schools. Early American textbooks such as “The New England Primer” and the McGuffey Readers taught children to read with a combination of poetry and prose. In this way, poetry was used to teach morals, patriotism and nationalism, along with subject areas like geography and mathematics.

In 19th- and early 20th-century classrooms, “schoolroom poetry” was memorized and performed as a way to promote citizenship, to create a shared sense of community, to develop an American identity and to assist with language acquisition – particularly among immigrants. Because they were meant to be learned “by heart,” the poems taught usually rhymed, had regular meter and used language that was easy to understand, remember and repeat.

This ease of form and content was not, however, matched by historical accuracy. Writers sometimes rewrote history into poems that celebrated American values. Take, for example, “Paul Revere’s Ride” by Henry Wadsworth Longfellow, published in 1860. The narrative is compelling for memorization and performance, and portrays an admirable version of American heroism; however, it contains little documented historical “truth.”

Learned “by heart” and shared with an audience, these poetic retellings of America’s past had significant cultural impact: Both the performer and those listening internalized a story that promoted a specific version of nationalism.

In the mid-20th century, it became less important for schools to make citizens or teach English language through memorized lines. Instead, poetry in schools separated into two strands: “serious poetry” and “verse.” Serious poetry was studied; it was officially sanctioned, used to teach literary elements like iambic pentameter, rhymed couplets, metaphor and alliteration. Verse, on the other hand, was unsanctioned – playful, irreverent and sometimes offensive. It was embraced by children for the sake of pleasure and delight.

By the late 20th century, classrooms and curricula began to value the sciences over literary expression and information and technology over art. The study of any poetry – serious or not – became marginalized, seldom occurring except in AP courses preparing students for college literature study.

Poetry in the classroom today

Though the late 20th century saw a decline in the study of poetry in schools, recent decades have seen an upsurge in poetry that is more relevant and more accessible to young people.

For instance, if in the past, schoolchildren learned poems written almost exclusively by white men glorifying a sanitized version of American history, recently students have begun to read poems by poets who represent racial, ethnic, cultural or religious diversity as part of their heritage. This represents a major development in the world of poetry for children.

Poets in recent years have introduced English-speaking children to a range of cross-cultural poetic forms: Japanese haiku, Korean sijo and the Middle Eastern ghazal. Poets have published collections of poetry (often multilingual) from around the world, conveying the experiences of culturally diverse national and international groups.

As well, children have access to poetry by groups that have historically been marginalized and silenced in American schools: Native Americans, Hispanic/Latino Americans, Pacific Islanders, Asian-Americans and African-Americans, as well as LGBTQ poets, poets with disabilities and poets from a range of religious backgrounds.

Many young people are also writing poems themselves – both inside and outside the classroom. There are a number of recent collections of poetry that contain the voices of young writers: “Things I Have to Tell You: Poems and Writing by Teenage Girls,” “Paint Me Like I Am: Teen Poems from WritersCorp,” “When The Rain Sings: Poems By Young Native Americans,” “Salting the Ocean: 100 Poems by Young People” and “The Palm of my Heart: Poems by African American Children.” These collections are often used in classrooms to teach poetry as a vehicle for self expression. 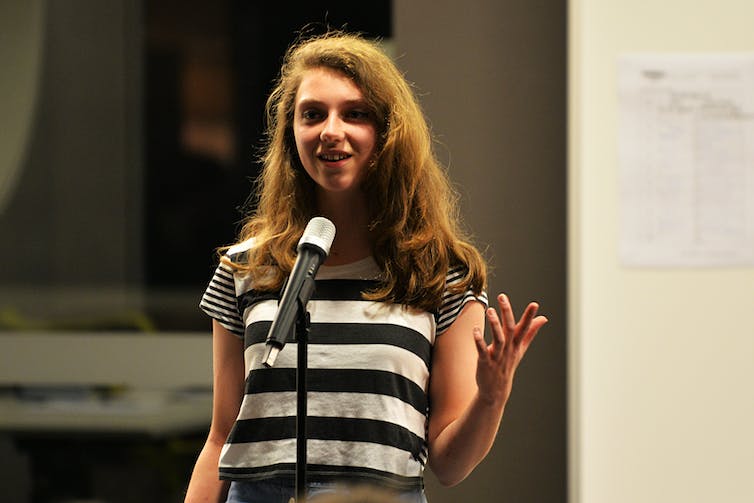 In addition to writing poetry in their classes, today’s young writers are appearing on numerous poetry websites and are circulating poems – their own and those of others – through social media.

The most exciting development in the world of poetry for young people is in the arena of performance. There is a widespread renewed interest in spoken poetry for and by young people. Its growth is signaled by the emergence of hip-hop, rap, poetry slams and spoken-word poetry events.

The roots of poetry are in speaking and listening. Poetry events for young people once again allow students to perform for an audience those poems they have committed to memory and learned “by heart.” If, in the past, poems were memorized as a way to indoctrinate students into a way of being “American,” today’s young poets are using their words and voices to express their own cultural and political convictions and commitments.

As a poet, educator and scholar, I am heartened by the current reinvigoration of the field. In myriad forms by diverse writers in a variety of venues, poems for children are happening.

Young people are growing their own voices, falling in love with words, writing and performing their own poems.

In and out of schools, they are reclaiming the poet selves that Stafford believes they were born with – through a powerful and continuing relationship with the rhythms, forms and sounds that are poems.

This article is republished from The Conversation under a Creative Commons license. Read the original article. Laura Apol is a poet, and Associate Professor of Teacher Education at Michigan State University.