Change Yourself, Change the World

More and more today, we see people and organizations taking on big problems with the noble goal of "changing the world." We hear the same opportunities:

* We just need to put the right system in place...

* We just need the right incentives...

* We just need the right NGO's on the ground...

All of this makes sense and seems true, but within every 'successful' system or incentive, we also see the shadowy side. Recently microfinance, popularized by the great pioneer Muhammad Yunus, has been tarnished as part of this 'change the world' paradigm. The common thread in changing the world is that much of it seems to come from the same place -- the most important thing is to change the world, not to change ourselves.

So an alternative thesis for us: What if real change came not from attacking a global problem directly, but by focusing first on changing ourselves internally? Specifically, I mean cultivating 'other-orientation' (as opposed to 'self-orientation') and deep connection to people and the planet as a precursor to any outward activity.

Recently, a friend of mine tried to do just that in his life with what he called a "karma auction." He gave away hundreds of computers via auction. The way you bid in this auction wasn't by offering money, but by sharing how you'd use the computer to help others. The most impactful plans win. This is a wonderful idea, but to me the most intriguing element of it is how each person in the chain must cultivate 'other-orientation' as part of the exercise. The process rewires everyone's brain just a little towards humility, empathy, openness, helpfulness. Each computer must have generated hundreds of similar ripples, all because the intention from the beginning was other-oriented. Now if we went at it the other way, focusing on results first and process second (e.g., traditional selling to the highest bidder), the ripples likely do not occur. 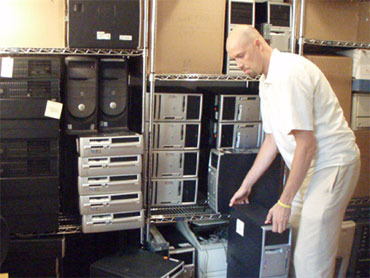 The big shift that happens when we switch the focus to the internal is we stop working at the level of symptoms and go to the root cause. Just like a person who loves junk food and is trying to lose weight. Rather than face the deep problem, it's easier to just switch to the low-calorie Oreos. Problem is that eventually, not facing that deep problem leads to even more worries (such as cancer, heart disease, or yo-yo weight gain). In the world of social change, the symptoms are lack of rights, goods, services, security -- but the root cause is lack of deep connection and love, within each of us, for all our fellow men. Addressing that root starts by going within and slowly changing oneself action by action. Whether you're a world leader or an everyday Joe, building that deep connection is of tremendous value.

There are 4 ideas you have to believe if you seek to "be the change you wish to see in the world."

Real change requires patience: Taking that weight loss example, it's not easy to shift from junk food to veggies, and results don't come right away. It takes time to move others through love (rather than by carrot or stick), but the results are real and lasting. Being patient is OK!

Real change is decentralized/local:The revolution will not be provided by governments or corporations. It is not in their interest. It has to be owned in each household, one by one, to be real change.

Real change cannot be traditionally measured: We are a society that believes strongly in measurable cause and effect. However, world doesn't work that way -- each result is born of millions of conscious and unconscious acts. Similarly, each action leads to millions of results. Why measure that complexity? Wouldn't it make more sense to simply keep track of the root, which is the intention that people are cultivating?

Real change is never complete: Each person in society is a seeker. As nobody has the answers, it is incumbent on all of us to humbly support each other in being better people.

If those elements resonate, there are many ways to cultivate this movement towards other-orientation. A few examples: building person-to-person relationships based on deep respect and connection, offering one's gifts freely for some portion of the day, intentionally doing small acts of kindness, seeking internal clarity through any number of awareness-building practices (such as introspection, prayer, or meditation). The opportunities literally are unending.

It is a bit of a paradox, but the end result of all this "internal change" is in fact of greatest service to the world. Imagine a system proposed by someone who deeply cultivated thinking only about others for their whole life. Imagine an incentive system, or a business model, born of the same process. In a world where most everything is 'self-oriented', these options would be breaths of fresh air. Systems do need shifting, and incentives can certainly be reworked. However, there will be no wisdom to inform societal changes unless we cultivate other-orientation in addition to our daily work. The key is simply to get started!

This article is reprinted here with permission from the author. More from Birju Pandya (also on Twitter).

The manner of giving is worth more than the gift.
Pierre Corneille