Home > News > Lessons from the Garden: Snakes and Strawberries

Lessons from the Garden: Snakes and Strawberries 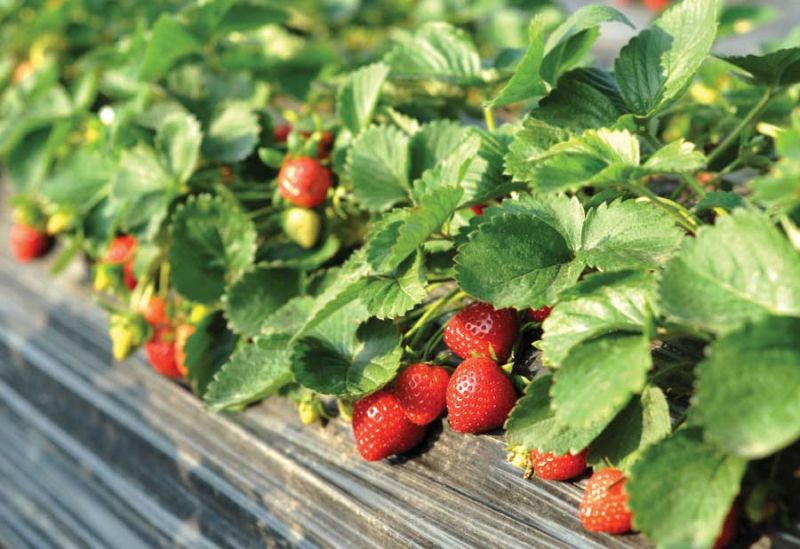 ALANDA GREENE experiences the effect a change makes to the dynamics in her garden, and considers how much more aware we need to be of the decisions we make, and their effect on the Earth.

Creatures had been eating the strawberries. Not only nibbling the bright red juicy fruit but also chewing at the roots, causing stress to the plant, killing several of them. Root-chewed plants were scattered through the bed.

I suspected voles since, when I lifted the straw mulch around the bed, I saw telltale holes dug into the soft black earth. Chipmunks were the next suspects, with several regularly bounding between the beds as they nibbled beans, raspberries and young cauliflower. They get away with a lot by being so cute; cuteness might be an evolutionary advantage.

Something had disrupted the balance and my hunch was that the garden snakes had been disturbed. I cringed with the realization that the something might be me.

The snakes have maintained themselves in a steady population in the garden for decades. They dwell mainly along the stone wall where the herbs grow.  They eat slugs, voles, mice and probably those adorable chipmunks. But in doing so, they keep the numbers of these garden creatures at a reasonable level. Since the snake population doesn’t change much over the years, something is also keeping them in balance.

A couple of years ago, in an effort to contain herb growth, and even more so, the weed growth among the herbs, I moved the plants into large pots. I then took away the top layer of soil and surrounded the pots with sawdust. But in so doing, I unwittingly disturbed the homes and pathways of the snakes.  Without the snakes, there are more of those creatures that eat strawberries and destroy the entire plant.

I don’t know where the snakes have gone and I miss them. Even though, no matter how prepared I was to meet one of them lying on the warm stone at the day’s end, when the air was getting cool, I invariably started in surprise when I encountered one. A quick recovery followed and delight in seeing them. Knowing that snakes are sensitive to vibration, I regularly talked to them aloud and began to sing to them. Where they had once quickly slithered out of sight, into the foliage of the Echinacea or the sage, they began to move away more slowly, then to stop when I hummed or sang.

Often a snake lifted its head, red tongue flicking, as it tried to find more details about what was making the sound. Maybe it was singing along. When I remembered to anticipate a snake in that area of the garden and approach slowly, humming or singing, the snake would continue to rest on the rock wall, soothed by both sun and song.

The snakes are sometimes challenging, not always met with appreciation and song. They like to go to the pond on hot days to swim and cool themselves. They also like to eat the goldfish they find there.  Still, I’m feeling badly for upsetting their home and maybe in so doing making them vulnerable to a predator not earlier encountered.

I did not have the intention to disturb the snakes, in spite of their behavior towards the fish. But I failed to consider the consequences of my actions and anticipate the impact of my desire to have easier management of the herb area.

The disruption of balance happened because I lacked foresight. This gives me insight about the ecological problems on our planet that result from human activity. The aims have not been to cause harm but to bring about improvement.

I have heard that the Iroquois Nations, before making decisions and taking action, contemplated what the impact of a decision could be as far ahead as seven generations.  To even be able to think how an action could impact so far into the future suggests a considerable awareness of their world, an understanding of relationships and interdependency. A natural garden is a mini-world of interactions and balances.

With my herb garden plans, it would have been thoughtful to imagine more than one level of the garden. I was attending to what grows above ground, what is visible. Bill Devall, Professor of Sociology at Humboldt University, writes: “But nature is not just a collection of scenery ... Nature is a process of interacting events.” It is an interaction of the visible and invisible. Too often, only the visible is included. The snakes have dens and tunnels under the surface. In fact, 80% of the plant biomass of the planet is actually underground.

There’s not much argument that our world is facing an ecological crisis that is the result of human activity. The crisis was not, however, intended, planned or imagined. People haven’t been deliberately going about with a scheme to destroy the earth’s environmental sustainability. They haven’t been aiming to wipe out legions of songbirds or golden toads or red gazelles. But they have done it. I wasn’t aiming to disrupt the snakes. It doesn’t mean I’m not responsible.

I see here the value and potential of daily reflection – to look back on the actions of the day and assess their effectiveness, their possible good or harm. This is not done to engage in metaphorical self-flagellation. It is to bring care and consideration into what I do, and develop more subtle awareness as a result. It is to recognize where errors have happened, and where behavior or speech was less than my ideal response. Then, it is to assert the preferred action, see it in my mind’s eye, so that the next time a similar situation arises I have a better chance of remembering my ideal and acting in accordance.

Another balance in the garden will emerge. The one I interrupted will not return and I can’t undo the results of my lack of thought, my actions based on what I wanted, without giving time to think broader and deeper. I can try to redress the harm through willingness to learn and then put the learning into practice.

The garden is not my own territory; I am part of the system. My efforts are that of a steward for the well-being of all members of the community. Therefore I must consider the impact of actions before acting, like the Iroquois. I must understand relationships, observe what is occurring both visibly and in the unseen, and expand my viewpoint beyond the obvious. I too have to grow with the garden.

This article is syndicated from Heartfulness magazine. Heartfulness is an approach to life, the world around us, and to our Self. Learn to Meditate. How to Meditate. Heartfulness Meditation. Mindfulness. Yoga. Author Alanda Greene lives in the Purcell Mountains of British Columbia, Canada. Having a deep connection with nature, she and her husband built their house of stone and timber and a terraced garden, and integrated their life into this rural community. Alanda’s primary focus is the conscious integration of spirit with all aspects of life.

Earth's crammed with heaven...
But only he who sees, takes off his shoes.