--by Michael Nagler, syndicated from opendemocracy.net, Oct 03, 2017
Nonviolence can be a safe, effective and lasting way to defeat injustice, but like any other science it takes knowledge, courage and determination. 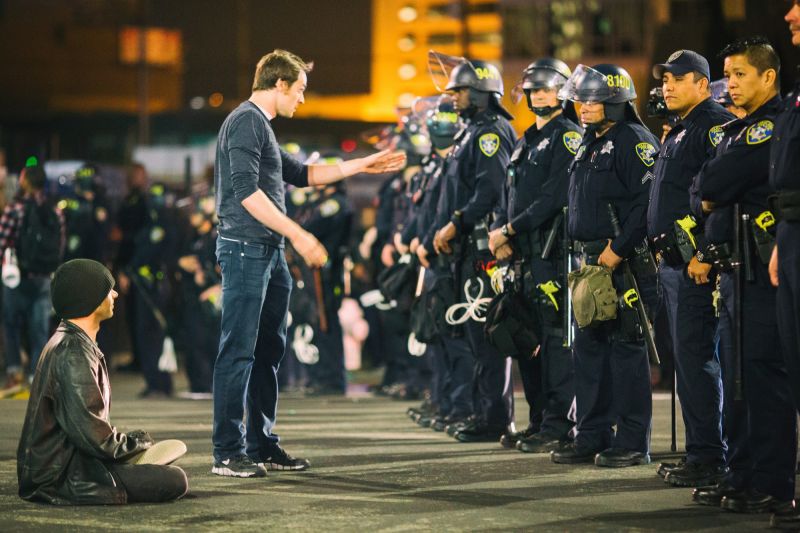 Here are six guidelines that can help you carry out nonviolent action more safely and effectively, while drawing upon nonviolent practices from your own cultural heritage. These guidelines derive, as you’ll see, from two basic points to bear in mind:

We are not against other people, only what they are doing.

Means are ends in the making; nothing good can ultimately result from violence.

The more we respect others, the more effectively we can persuade them to change. Never use humiliation as a tool–or accept humiliation from others, as that only degrades everyone. Remember, no one can degrade you without your permission.

Healing relationships is the real success in nonviolence, something violence can never achieve. Even in a case of extreme violence, Gandhi felt it was possible to hate the sin, not the sinner. In 1942, when India was held down by the British and fearing a Japanese invasion, he advised his fellow compatriots:

Thus, nonviolent resisters would refuse them any help, even water. For it is no part of their duty to help anyone to steal their country. But if a Japanese person had missed their way and was dying of thirst and sought help as a human being, a nonviolent resister, who may not regard anyone as his enemy, would give water to the thirsty one. Suppose the Japanese compel resisters to give them water; the resisters must die in the act of resistance.

Gandhi initiated 18 projects that enabled Indians to take charge of their own society, making it much easier to “dismiss” British rule and lay the groundwork for their own democracy. Constructive work has many advantages:

It enables people to break their dependency on a regime by creating their own goods and services. You cannot get rid of oppressors when you depend on them for essentials. You are not just reacting to offenses but taking charge. Being proactive helps you shed passivity, fear and helplessness.

It gives a movement continuity, as it can continue when direct resistance is not advisable.

Studies have shown that working together is the most effective way to unite people. It builds community and reassures the general public that your movement is not a danger to the social order.

Most importantly, it establishes the infrastructure that will be needed when the oppressive regime falls. Many an insurrection has succeeded in dislodging a hated regime only to find a new set of oppressors rush into the vacuum.

Nonviolent action always has positive results, sometimes more than we intended. When China was passing through a severe famine in the 1950s, the US branch of Fellowship of Reconciliation organized a mail-in campaign to get President Eisenhower to send surplus food to China. Some 35,000 Americans took part. Our message to the President was a simple inscription from Isaiah: “If thine enemy hunger, feed him.” It seemed as if there was no response. But 25 years later, we learned that we had averted a proposal to bomb targets in Mainland China during the Korean War! At a key meeting of the Joint Chiefs of Staff, Eisenhower announced: “Gentlemen, since 35,000 Americans want us to feed the Chinese, this is hardly the time to start bombing them.”

Have clear goals. Cling to essentials (like human dignity) and be clear about your principles, but be ready to change tactics or compromise on anything else. Remember, you are not in a power struggle (though the opponent may think that way): you are in a struggle for justice and human dignity. In nonviolence, you can lose all the battles but still go on to win the war!

You are trying to rebuild relationships rather than score “victories.” In a conflict, we can feel that in order for one side to win the other must lose, which is not true. Therefore, we do not seek to be winners or rise over others; we seek to learn and make things better for all.

During intense negotiations over the Montgomery, Alabama segregation laws, Martin Luther King, Jr., made an interesting observation that he notes in his book Stride Toward Freedom: The Montgomery Story. An attorney for the city bus company who had obstructed the African-American people’s demands for desegregation revealed the real source of his objection: “If we granted the Negroes these demands they would go about boasting of a victory that they had won over the white people; and this we will not stand for.”

Reflecting on this, King advised the participants in the movement not to gloat or boast, reminding them: “Through nonviolence we avoid the temptation of taking on the psychology of victors.” The “psychology of victors” belongs to the age-old dynamic of me-against-you, but the nonviolent person sees life as a “co-evolution” toward loving community in which all can thrive. Gloating over “victories” can actually undo hard-won gains.

We are conditioned, especially in the West, to think that power “grows out of the barrel of a gun.” There is indeed a kind of power that comes from threats and brute force–but it is powerless if we refuse to comply with it.

There is another kind of power that comes from truth. Let us say that you have been petitioning to eliminate an injustice. Perhaps you have made your feelings known in polite but firm protest actions, yet the other party is not responding. Then you must, as Gandhi said, “not only speak to the head but move the heart also.” We can make the injustice clear by taking upon ourselves the suffering inherent in the unjust system. This allows us to mobilize Satyagraha, or “truth force.” In extreme cases, we may need to do it at the risk of our own lives, which is why it is good to be very clear about our goals. Do this with care.

History, and often our own experience, has shown that even bitter hostilities can melt with this kind of persuasion that seeks to open the eyes of the opponent, whom we do not coerce. Nonetheless, there are times when we must use forms of coercion. For example, when a dictator refuses to step down, we have to act immediately to end the vast amounts of human suffering caused by that person misusing power. Still, it requires strategic thinking and nonviolent care to do it right. But when time does allow, we use the power of patience and persuasion, of enduring rather than inflicting suffering. The changes brought about by persuasion are lasting: one who is persuaded stays persuaded, while someone who is coerced will be just waiting for a chance for revenge.

Nonviolence no longer needs to take place in a vacuum. Always note that if you are using nonviolence with courage, determination and a clear strategy, you will more than likely succeed: win or lose, you will be playing your part in a great transformation of human relationships that our future depends on.

This article was first published in Nonviolence.

This article is printed here with permission. It originally appeared in the Transformation section of OpenDemocracy. Transformation tells the stories of people who are combining personal and social change in order to re-imagine their societies.

If you clean the floor with love, you have done an invisible painting.
Osho