Poet's and Sages Behind Closed Doors 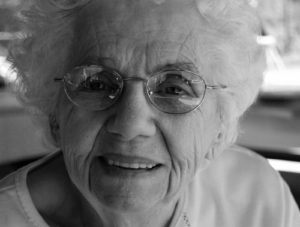 Sunlight flashes across the nursing home lobby when I enter. By degrees the brightness dims as the door swings shut. My eyes adjust to a line of wheelchairs, their occupants so still they might be in deep meditation. One woman rouses, her brown eyes searching me out. “Feet don’t work a’tall,” she says politely. “Not a lick of good.”

I walk down the hall past living koans. A man is held in a chair with padded restraints resembling a life jacket. His arms extend forward as if he is about to swim, but he doesn’t move. He repeats over and over, “I, I, I, I.”

An aide explains in a loud, cheerful tones to a woman hunched over a walker, “There is no upstairs, Dorothy. See? No elevator. We only have one floor.”

Dorothy ignores her and pushes the walker ahead. “Let’s go upstairs now,” she says.

“Show me how to get there.”

When I get to the room where my husband’s grandmother lives, she says, “There you are!” She knows me even if she can’t remember my name. Today I get her talking about childhood memories. She recalls that as the youngest of an immigrant family she had to be tough even as a little girl. “They’d beat you like they wanted salt,” she says, “but I wouldn’t cry.”

“Who beat you Grandma?”

Her roommate, who leaves the television on all day, calls out over the noise of a game show, “Ned, come over here.”

There’s no one by that name in the room. Not that I can see.

When I graduated from college I found no openings in my field. Instead I found a job as a nursing home activities director. There I read the newspaper aloud every morning to a lively group of elders, soliciting their opinions and making sure to find the articles they loved to cluck over — tales of human failings. I played songs on the piano like “Bye Bye Blackbird” and “Let Me Call You Sweetheart” for sing-alongs. I got a group of rabble-rousers together each month, named them the Residents’ Council, and helped them advocate for positive change with the administration. And I developed a local network of activity directors. We shared closely guarded secrets such as contact information for puppeteers, barbershop quartets, amateur magicians, and others willing to perform in nursing homes.

My fellow activity directors and I had the best jobs in these places. We had time to listen to the people who lived there. When I listened, really listened, I knew myself to be in the presence of poets and sages. I developed a writing program to let others hear them too. When I took the job, the facility’s monthly newsletter contained only a schedule of events, a list of birthdays, and generic health tips. But the building was home to 100 people with voices of their own. I needed to expand that publication.

I started with a column called “Tip of the Month.” Some residents didn’t know what day of the week it was or where they were, but if asked for suggestions on getting a child to behave or living within one’s means, they bubbled with advice. That column usually featured comments by dozens of residents. Many times their opinions contradicted each other, making for a livelier feature. Better yet, staff members and families implemented some of the suggestions in their own lives. When they came back and told the residents about ways they had benefited, it helped put these seniors back in their rightful position as elders with wisdom to offer.

“My mother used to put dry onions on my chest like a poultice. She browned them in a frying pan and put them on hot as I could take.” — Harry Pierce

“My mother would rub goose grease and turpentine on our chests and put us to bed after a drink of whiskey, hot water, and sugar. Boy did we smell after that!” — Lillian Edwards

Once I got beyond the typical “how are you feeling today?” conversational dead end so common in nursing homes, I discovered residents whose suggestions were too long and complex to fit in “Tip of the Month.” If asked to give advice for high school graduates their answers covered psychology, religion, and culture. If the question dealt with handling bullies, some people brought up international affairs, others disclosed wild personal incidents.

So I added another section to the periodical. This one centered on a different theme each month. Harvest time, first day of school, best friends, what made a good neighbor, lifelong dreams, a mother’s touch, fatherly advice, vacations. Some people brought up fragments of memories, others shared powerful insights. Nearly all of their answers illuminated a bygone era.

“My grandfather from Hungary never drank water…Hungary had been at war and both sides poisoned the water. He never took up drinking the water again… Each year he bought a truckload of grapes and had them dumped through the basement window. We helped him make barrels of wine.” — Bill Dobscha

“Back in Ireland we’d dig up the potatoes, pick the apples, and store them away…Close to winter the pig was butchered and the meat smoked. The wheat was ground for bread and we made sure there was enough oatmeal to feed us 21 kids all winter.”  — Catherine Monally

“Only rich kids had skates, but you could slide on ice by smashing tin cans on your heels and use garbage can lids for sleds. We had fun in any weather.”  — Freda Tesar

Sometimes new staff members had difficulty telling residents apart, frustrated that stooped posture and thin white hair made the very old look alike. But stories in print gave unique perspectives on residents who spent day after day in nearly identical rooms. It also gave us more to talk about with them.

Although some people understandably found it difficult to adjust when they had to move to a nursing home, many adapted with astonishing ease to the losses represented by institutionalization—loss of identity, health, possessions, and freedom. Their contributions to the newsletter made it apparent they did so because they’d already endured great difficulty in their lives, hard lessons in impermanence.

Residents also blasted apart the sweet oldster stereotype. Some were eager to talk about their indulgences, shenanigans, even crimes. Oftentimes pain or dementia loosened the sense of propriety that had a greater lock on their generation, other times mischievousness seemed to linger right under the surface. Their willingness to reveal an edgier side accorded them new respect from the youngest people on staff. As residents talked of the past I was struck by how dispassionate many of their accounts were. It seemed they no longer suffered over prejudice, judgment, and injustice imposed on them or that they had imposed on others. They talked with a distant tone, as if simply telling parables.

Soon I added a “Resident of the Month” feature. This gave me the luxury of listening to much lengthier oral histories. Some people told me details they didn’t want in print and we worked together to craft the material they did want published. I usually had to corroborate the facts with their files and was often surprised to find significant information they didn’t bother to mention, further evidence that stories aren’t in the data of where one lived and worked. They are in the details. Union busters coming to rough up a little girl’s coal-mining daddy and her pride in hiding his supper dishes set out on the table so no one would suspect he was hiding under the front porch. A sibling dying in the night of diphtheria, and later honoring the lost child by giving one’s firstborn baby the same name. There were also tales of accomplishments, hardships, and sacrifices dismissed with the wave of a hand–“No, I never saw Mama again after I left the Old Country. That’s how it was.”

Then I started regular poetry workshops. I read poems aloud, passed around objects with relevant smells and textures, shared observations. (And served cookies. Sweets inspired many a reluctant participant.) Then I scribbled rapidly as they talked. Later I combined their words into a group poem crediting each author with his or her own line. Residents and their families seemed to prefer traditional verse so I encouraged workshop participants to work with rhyming phrases whenever possible. Some were diagnosed with dementia or suffered speech impairment due to a stroke. Though they couldn’t make coherent contributions to our other writing projects, their abilities shone in poetry.

Phrases from a resident who said the same thing over and over took on a new tenor when made into a refrain. The man who dryly commented on a topic with only three words in an hour had his contribution included. So did the woman who kept interrupting with more ideas. After our workshops I would visit other residents’ rooms to seek their input, searching out those who couldn’t attend the poetry sessions but whose impressions could make a difference. Occasionally I transcribed the words of a single resident to create an entire poem.

When residents’ words were invited, taken seriously, and written down, when I nodded and looked them in the eye, they had more to say. A lingering silence, in fact, seemed to bring ideas from a place of deep contemplation. Many times I watched someone’s gaze turn to the window, past the ubiquitous geranium. I waited. When it seemed that they’d forgotten completely they would speak gracefully, forcefully, in ways that juxtaposed symbols with objects, meaning with abstraction. Poetry.

“I’ll see you next week Grandma,” I say, leaning down to give her a hug. She seems present yet detached, like so many of my greatest teachers. I brush the hair away from her face, pat her hand, adjust her lap robe. She smiles distantly. I stand for a moment. She rouses briefly, looks at me. “Listen,” she says urgently, “the wind! The wind!”

There are no open windows, no breeze on the soundtrack of the blaring TV. So often she speaks from a place beyond logic. I want to know if it’s possible to trace her words back to meaning, but her eyes are already closed.

As I walk outside the sunlight is intense. I fumble for my sunglasses. Only then does my attention turn to my breath. The wind. The wind.

This article is syndicated from the The Moon magazine, an online magazine of personal and universal reflections.Laura Grace Weldon is the author of a poetry collection titled Tending and a handbook of alternative education, Free Range Learning, with a book of essays due out soon. Her creative non-fiction work appears in Under the Gum Tree, Praxis Magazine, Tikkun, Wired, Sunlight Press, Poet’s Quarterly, Lilipoh, Penduline, and others. Connect with her at lauragraceweldon.com

When one tugs at a single thing in nature, he finds it attached to the rest of the world.
John Muir