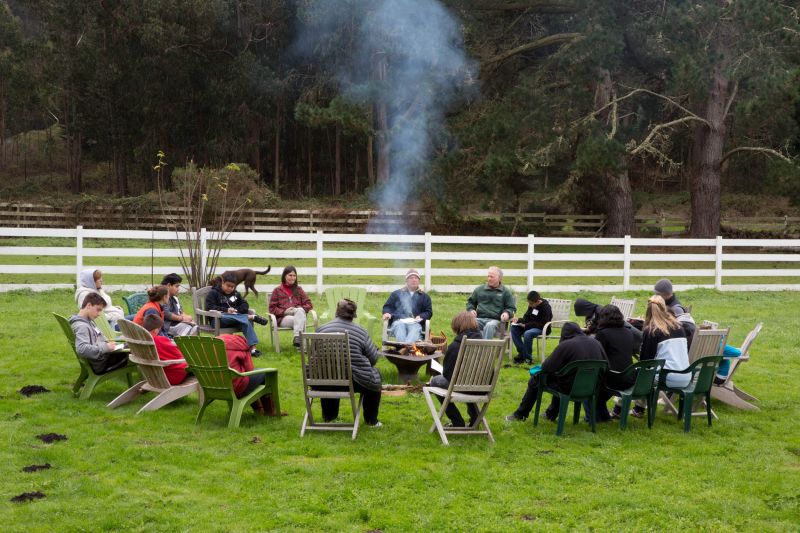 OUR FILM BECOMES THE FIRE

In 2017, we released our labor of love film, TeachMeToBeWILD: A Story of Hurt Children and their Animal Healers. This film is a universal healing story that brings together many interconnected elements: children, animals, nature, silence and the power of safe, non-judgemental listening spaces. One of our greatest inspirations to make the film was witnessing how Steve Karlin and John Malloy do not teach the children—rather, they create a “safe space” where the children  learn experientially. As we began screening the film in schools, juvenile detention centers, community groups and spiritual institutions, we experienced that the film was also naturally culminating in creating a safe space. Although hurt and vulnerable, the children in the film share deeply with wisdom and clarity. Both the children and the animals visibly heal, creating a container that allows for deep reflection.

The film naturally became “the fire” to anchor healing circles—inviting our deepest vulnerabilities, a space to share stories, build relationships and heal. Hence, healing circles have now become an integral part of our film screenings.

The ripples from these circles have been moving—building trust in community for juvenile girls, honoring silence to hear one’s inner voice, deepening listening where classmates learn each other’s stories and how to support each other, to breaking down walls between teens and their parents, and inspiring educators to teach in nature. For more than 50 years, John Malloy has been leading healing circles in vulnerable communities. On a recent ServiceSpace community anchors call, John spoke of the circle as a way of life. You can learn more from his conversation here: The Wisdom of Circles: In Conversation with John Malloy.

How can we convey the power of the circles we have witnessed?How can we provide guidance and an experience of how to anchor a healing circle? As we were thinking about this, we were invited to screen the film at Mount Madonna School. Located on 355 acres of vistas spanning the entire Monterey Bay in California, Mount Madonna School is dedicated to helping students become aware of the range of their creative talents and how those talents can be applied in developing a life of positive meaning and purpose. Run by a community of teachers, one of their founding principles is to teach students by opening them to a variety of learning experiences including travel and being in the outdoors. These principles were in complete alignment to the “Foundry School” that John Malloy helped established in 1980 to serve as a bridge back into the world for justice involved youth. Since the 1990s, John brought a group of Foundry Students to Mount Madonna to be in service—to build structures, move boulders, create paths, pave roads and clean. This experience taught the students to think beyond themselves, serve and come together as a family. Over time, John inspired the community at Mount Madonna and established lasting relationships with the teachers and their resident community.

We were excited about the possibility of John coming back to Mount Madonna to anchor a circle. Wouldn’t it be wonderful to record this circle to serve as an example? We asked and Mount Madonna School and they kindly said yes.

HOW TO HOLD A HEALING CIRCLE?

Here is the recording from Mt Madonna School. We begin this video by offering some thoughts and practices for healing circles, and then invite you to witness the circle co-created by the students of Mount Madonna and anchored by John Malloy.

Please know that TeachMeToBeWILD is streaming online at KarmaTube.  If you wish to host a film screening followed by a healing circle, please get in touch.   If the film and this video can serve your journey, please let us know how we can support you.

Anne Veh and Rajesh Krishnan are filmmakers and co-producers of TeachMetoBeWILD.

We've sent daily emails for over 16 years, without any ads. Join a community of 164,304 by entering your email below.