Home > News > What Is Your Hearth of Hearths?

What Is Your Hearth of Hearths? 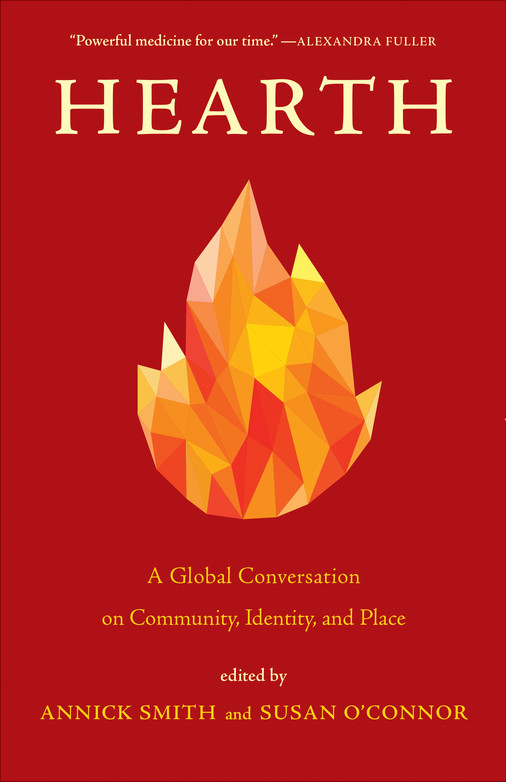 Hearth: A Global Conversation on Identity, Community, and Place Edited by Annick Smith and Susan O'Connor

Where—or what—is your hearth of hearths? Where is the place you feel most alive or connected? What is the thing that reminds you who you are and to what (or whom) you belong? In all the world, what do you call home?

These are some of the questions that Annick Smith and Susan O’Connor pondered as they edited Hearth: A Global Conversation on Identity, Community, and Place. In the preface, they describe how the “idea for a book about hearth started on the rim of the Kilauea Volcano on Hawai’i’s Big Island” when author, revered elder, and teacher Pualani Kanahele—who describes her hearth as the volcano—asked others to consider their own hearths: “Invite guests to your home,” she said, “and over a generous offering of food ask them where their hearth is.”

Over just such a meal at her home, O’Connor described her hearth as “an ancient grove of larch and pines.” Smith named her Hungarian-Jewish grandmother’s recipe for csirke paprikás (chicken paprika) as hers. The idea of an anthology about hearths intrigued them; they also wondered why “do we need a book about something so obvious and good?” Eventually, they committed to a book that would inspire readers to “identify, protect, or reimagine their home places.”

The result is thirty-five pieces, most of them written for this collection. While most of the contributions are essays, Hearth also includes a short story, a translated excerpt from a Pakistani novel, and six black-and-white photographs by Sebastião Salgado. Plus, nearly a third of the selections are poems, including two by W. S. Merwin.

The book is divided into three sections, each taking its title from one of the words—and concepts—embedded within “hearth”: Heart, Earth, and Art. Some pieces have a clear connection to their section title, but most would have been at home in any of the sections, a testament to the interconnectedness of the book’s themes and selections.

As I read Hearth, I became slightly obsessed with the word itself. “Hearth” can mean “the floor of a fireplace” or “a vital creative center.” It’s often found standing side-by-side and holding hands with “home,” as in hearth and home. But I found myself thinking beyond the definition and into the word itself. It’s just six letters long, and yet hearth contains multitudes. Besides the above-mentioned heart, earth, and art, hearth also contains he, hear, and ear.

And then there are the anagrammatic possibilities: the, heat, hath, heath, at, tar, rat, hat, ha, eat, ate, et, ta, hart, hath, her and aha. There’s also ae and hae (Scottish variants for “one” and “have”); rath (an ancient earthwork settlement in Ireland); and rathe, an archaic term for “growing, blooming, or ripening early in the year or season.”

Each time I found another word, I ran it through the filter of hearth as a concept: Is heat a required element of a hearth? Could a rat or tar figure into someone’s idea of home? What ancient hearths were found upon a heath or within an Irish rath?

This indulgent wordplay is more than a writer’s preoccupation with language. The way the term hearth spirals into itself and blooms outward into so many other things mirrors the content of the book. There are the expected hearths of stone-circled fires, hometowns, and houses, in these pages, as well as the unexpected: the Internet, a rug, cities, fathers, trees, birds, gardens, oceans, rivers, poetry, time, the cosmos. People find sanctuary in so many different ways—in other people, human-built environments, the natural world, even a metaphysical concept.

As its subtitle declares, Hearth aspires to be a “global conversation” with dispatches from more than twenty countries across seven continents. (Antarctica appears thanks to Barry Lopez’s foreword to the book.) The United States is perhaps overrepresented, the setting for about half of the book’s selections. Europe and Asia are represented by seven entries each, and Australia features prominently in two essays. Just a handful of selections have ties to countries in Africa and South America.

Pieces speak to each other in complex, surprising ways. A sense of interconnectedness is one of the anthology’s most striking features. In addition to the typical themes of identity, community, and place, other thematic images emerge and echo throughout. These include gardens; beehives; trees as companions; tigers; architecture; fathers and rivers; dreams and dreamscapes. The resulting concatenation creates a rich conversation among contributors and between contributors and readers.

One of the best things about Hearth is its global scale—the way it smashes through broad assumptions about “foreign” places and drops readers into the heart of such places, cultures, and histories. For example, contributor Alisa Ganieva came of age as the USSR was becoming Russia. In her essay “Hearths in the Highlands,” she searches for a place to call her own while tracing her ancestry to villages in the Caucasus Mountains:

Makhachkala, the plain seaside town I lived in, wasn’t native for my family, which had descended from different villages in the highlands. So I couldn’t name my motherland. Was it Russia? Or Moscow—my birthplace and the capital of my freshly diminished country? I preferred to answer ‘Caucasus’ or simply ‘mountains.’

She reveals an intricate history of people and place, reminding us that even small patches of land are steeped in epic stories of love and loss, and that a small mountain village can be a world unto itself.

And yet, towards the end of Ganieva’s piece, rather than finding her own place, she admits that she’s “glad to be a cosmopolitan” and concludes: “Perhaps my hearth lives only in my mind. Sometimes I feel a sting of happiness and a sense of hearth and home far away from my ancestors’ lands—sometimes on another continent. It all depends on the ambiance, on surroundings and people.”

Finding a sense of home away from one’s homeland is a recurring theme in Hearth. A number of essays explore migrations of various sorts. In “Enchantment,” Andrew Lam’s family leaves Vietnam for the U.S. while he is still a child. In “The Ink of Cemeteries,” Mihaela Moscaliuc considers the cultural differences between Romania and the U.S. through the eyes of her child. In “Home is Elsewhere: Reflections of a Returnee,” Boey Kim Cheng searches for a sense of home, first as an expat in Australia, and then again when he moves back to his native Singapore.

Some migrations are subtler and more “domestic” than others. In “The Rent Not Paid,” Kavery Nambisan moves back to her home district in southwestern India and ponders the ways life there has or has not changed over time. In “The Great Big Rickety World My Father Saved Me From,” Debra Magpie Earling leaves the Pacific Northwest (where no one in her family “lived more than an hour’s drive from Spokane”) for college in Ithaca, New York.

And in “Dream Shelter,” Angie Cruz writes of living “two realities. The reality of my marriage, motherhood, and teaching at a university in Pittsburgh, all of which are legibly responsible behavior, and my other reality, one often referred to as irresponsible, where I piled on debt to sustain my New York City apartment in Washington Heights.” In Cruz’s essay, cities, neighborhoods, and architecture become hearths and anti-hearths that have the power to shape the people who dwell there.

For too many people around the world, home is a place they’ve been forced to leave. Stories of immigrants, migrants, and refugees regularly inhabit the news in brutal, heartbreaking ways. The contributors of Hearth remind us that behind each of those labels are people seeking the same thing: the safety of hearth and home.

In his poem (“Codex Hogar”) and an accompanying essay (“Hearthland”), Luis Alberto Urrea explores in vivid detail the hardships and joys of living along the U.S.-Mexico border. He unflinchingly describes coming to the U.S. with his American mother:

I was suddenly called things I had never heard of. Greaser, wetback, pepper-belly, beaner, taco-bender. I learned that we are not human. We were Other. Because of some line that a commission decided to etch on some map…. And this mythos of wall-building was just more calling of names. Names in brick and mortar and wire and steel. And thus, my fourth lesson in home: I am and will be Other. Until I write you into my heart and make you see my home as what it was. Just another extension of your own home. For there is no them; there is only us.

People leave or lose their homes for a variety of reasons in Hearth, including climate change and politics. The outcome of the 2016 U.S. presidential election hangs like a specter over sections of the book, most notably in “A Tea Ceremony for Public Lands” by Terry Tempest Williams and Sarah Hedden. This segmented essay is formatted to follow the progression of the Japanese tea ceremony, which the authors and their neighbors hold to honor the endangered public lands of Utah—and to deal with their political grief and fury.

Gretel Ehrlich issues a clarion call about global warming in her essay “To Live.” She takes us to Greenland and shows us a place where hearths are made not with fire, but of ice:

At seventy-eight degrees latitude north their Wilsonian longing for home was not for green savannah, but for great expanses of white—of ice and snow-covered ice. Intense cold was not considered an enemy. They had no wood to burn. Hearth was a calm frigid place where sea ice could form, where the panting of sled dogs was the national song.

“But,” she writes, “the ice didn’t hold. That hearth—the culture of the extended family groups that coevolved with and was dependent on ice—is gone.”

Like Urrea, Ehrlich reminds us that there is no point in the act of othering, that there is only us: “[L]ife as we have known it everywhere” is also gone." She weeps for these losses, especially reflected surface light on ice or albedo:

I’ve been on my hands and knees sobbing as the ice melts, as we lose albedo, as die-offs mount up, and though there’s been no doubt that life is transient, chance, and change, I hadn’t anticipated the scale of loss, of the many worlds, cultural and biological—wholes within wholes—gone with no hope of return.

I think about the editors’ early question: “Why . . . do we need a book about something so obvious and good?” A book about hearths could have devolved into the merely warm and fuzzy. But the editors and contributors resisted such feel-good rhetoric; they have, instead, created a collection that sparks and sparkles with a kind of living fire that lights up the people and places of our world.

Syndicated from River Teeth, a journal of nonfiction narrative. Jennifer (Jenna) McGuiggan co-authored Mister Rogers’ Neighborhood: A Visual History (Clarkson Potter, October 2019). Her work has appeared or is forthcoming in The Orison Anthology, The Rappahannock Review, online for Prairie Schooner and Brevity, and elsewhere. She holds an MFA from Vermont College of Fine Arts. She is writing a book of essays that explore longing and belonging, from where we live to what we believe. Visit her online at www.thewordcellar.com.

Be willing to be a beginner every single morning.
Meister Eckhart