Home > News > The Little Priestess: Listening with the Ear of the Heart

The Little Priestess: Listening with the Ear of the Heart

Excerpted from "Listen with the Ear of the Heart: An Autobiography"

I can't remember exactly when I first began the ritual of stealing into my parents bedroom to 'say' Mass. But I can recall vividly the moment when the whole fantasy fell apart. Every day, around 4 o'clock, that parental bedroom became a private chapel where I 'said' rather than 'heard', Mass. The centrepiece of that room was a small fireplace of brown and grey tiles, which faced the big bay window. I would stand up on the little ledge of the fireplace and being ahead of my time, face out towards the congregation. The gangly oak tree outside danced and sang. 'For you shall go out in joy, and be led back in peace...and all the trees of the field shall clap their hands' (Isiah 55:12).

To the left of the 'altar', the ledge of the fireplace, was a statue of Mary. At its dead centre was a black and white crucifix with a three-dimensional image of Jesus. With Mother and Father safely away, I imagined the room was full of characters all hanging on my every word for redemption and salvation. We quietly chanted the 'Our Father' together, and I sang 'Regina Caeli' and 'Adoro Te Devote' while my invisible flock made their way towards me for Holy Communion, which I doled out to them in the form of round white mints.

My 'sacristy' was the landing outside the door. Now one afternoon, I passed my big brother there after I had just said Mass. 'Noel, I'm going to be a priest when I grow up," I told him excitedly. "Don't be so ridiculous, Noreen. You can't even be an altar boy, not to talk of a priest!'" That was the first time I realized that the priest saying Mass every Sunday at Caherline would never be a woman. Devastated that I might never minister to humans, my mission then became to convert--at the very least-- the animals around me! Very little conversion was needed; animals have an innate sense of the spiritual and the silence.

I started with my little cocker spaniel, Banner. After school each day, when all the poor dog wanted was to be taken for walk, I would first insist that we bless the walk with a prayer. As I'd tickle him under his front paws and sing to him, he'd wriggle his little head from side to side with pleasure. I firmly believed that he was really sent to me from his anagrammatic namesake, God.

I then progressed onto my mother's hens. They supplied us with what are now called 'organic' eggs and, to show my thanks, I vowed to bring them to God through listening. Every morning and evening, with my little sugan chair under my arm, I invaded the hen house and insisted that these foul fowl sing the 'Our Father' to be saved. And I chanted each line, I waited for them to respond. And they did, they did. Hen-pecked into conversion.

On the 29th of July 2017 Nóirín was ordained as the Rev Nóirín Ní Riain, minister in the One Spirit Inter Faith Seminary Foundation

Other quotes on sound, silence and listening from Noirin's autobiography: 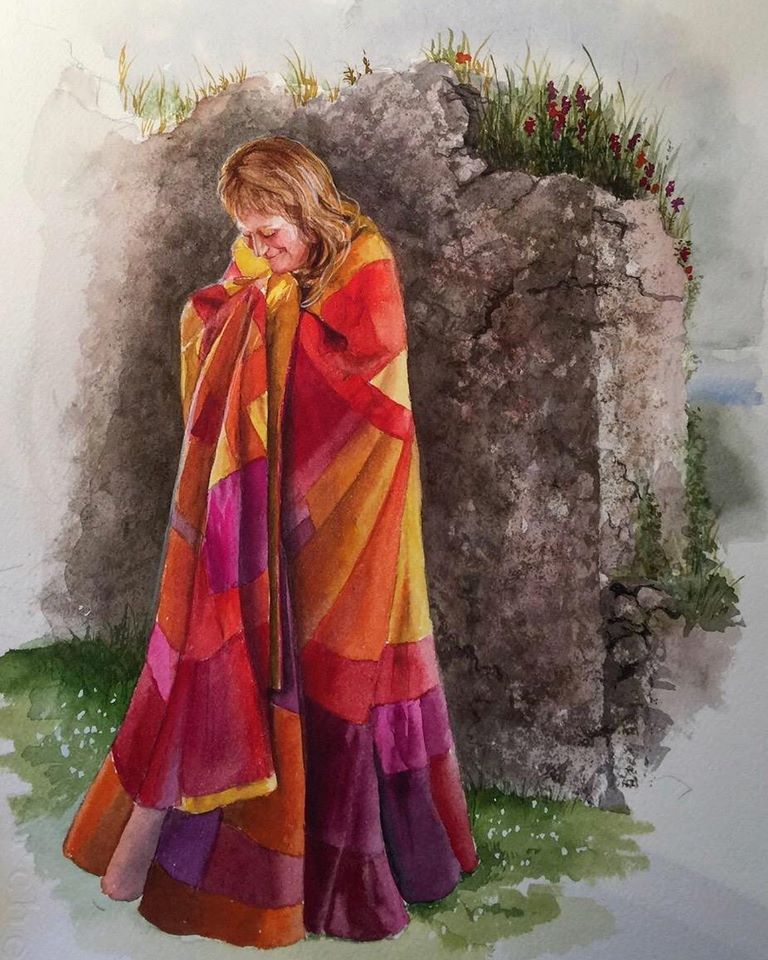 There are moments in our lives when we are startled into reality by a sound, a word, or indeed a silence. This sometimes gentle, sometimes raucous sound whispers to us a sudden recognition of our own belonging in this strange world, and we become deafened with a truth beyond the horizons of our everyday lives.

Silence and sound create an inseparable duality. Thus stillness and its corresponding resonance simply 'are'. Silence is the cantus firmus of life; the steady, regular life-force to which all our true experiences are melodiously added.
***

For more inspiration join a special on-line workshop this Thursday with Noirin and her sons-- Song of the Cocoon: Tuning the Heart's Ear in Times of Transition. RSVP info and more details here!

Painting of Noirin Ni Riain, by Lynn Lupetti. Noirin Ni Riain is a celebrated singer of spiritual and religious music from Ireland. She has released 16 albums, including several with the  monks of Glenstal Abbey, and three with her sons Owen and Micheal O'Suilleabhain -- with whom she also leads sacred tours in the Golden Vale of Ireland, and online retreats. Noirin is the author of several books, including her  autobiography, Listen with the Ear of the Heart, and Theosony: A Theology of Listening.

Kindness is the language which the deaf can hear and the blind can see.
Mark Twain