Home > News > Painter of the Desert

Painter of the Desert

Working in a Navajo Nation health clinic for twenty-six years, a street artists’ heart beats under Chip Thomas’ doctor’s apron. Born out of his passion for photography and wheat pasting, the Painted Desert Project attempts to heal and spread love. 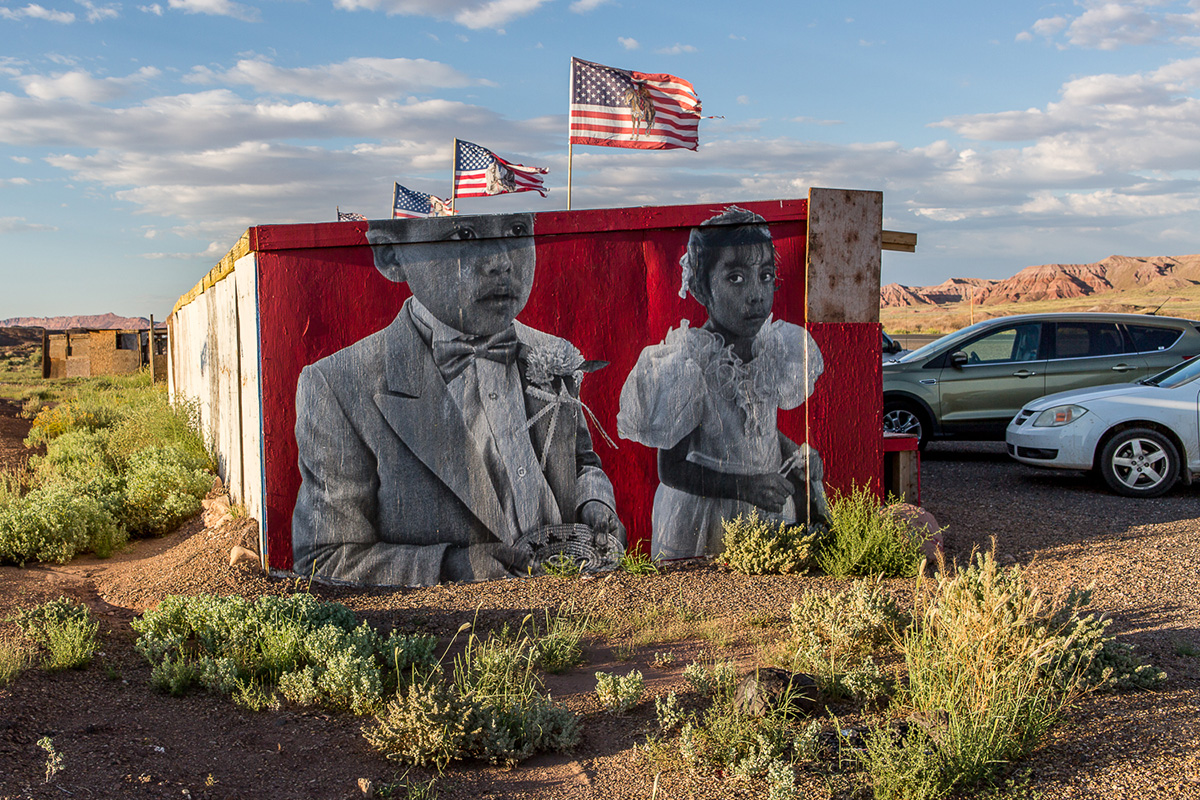 Chip’s works are large. They are meant to stop you. And these stops have the potential to turn into additional income to roadside vendors. Up to ninety percent of the native peoples in South West USA depend on crafts as their primary or secondary income source.

”Three things are important in this world: good health, peace with one’s neighbor, friendship with all.” This proverb from Senegal welcomes us on James “Chip” Thomas’ door. We ring the bell. He opens with a smile. Brazilian tunes fill the living room. Outside, sunset dyes the desert with pale pink. Chip settles on a wooden stool beside his vinyl collection and begins to tell us his story.

A Long Way to Trust
Born in North Carolina, Chip moved to the reservation twenty-six years ago. Work at a local health clinic agreed with his view of public health. He arrived bright-eyed and with misconceptions that soon proved incorrect. ”I came here thinking that as a member of another historically oppressed group, I’d be quickly accepted into the community. I was wrong.”

”People here are primarily occupied with fulfilling their daily needs, taking care of themselves and their families”, Chip explains. ”They are cautious about outsiders, many of whom have come here just to take, giving nothing back in return.” There is a saying on the reservation that unless you’ve walked amongst the people for two years, they don’t take you into their trust.

Chip’s journey into that trust began through the camera lens. ”In my first year here I built myself a darkroom. After work I’d go out into the community to spend time with people as they were doing chores around their homesteads or hanging out with their families.” 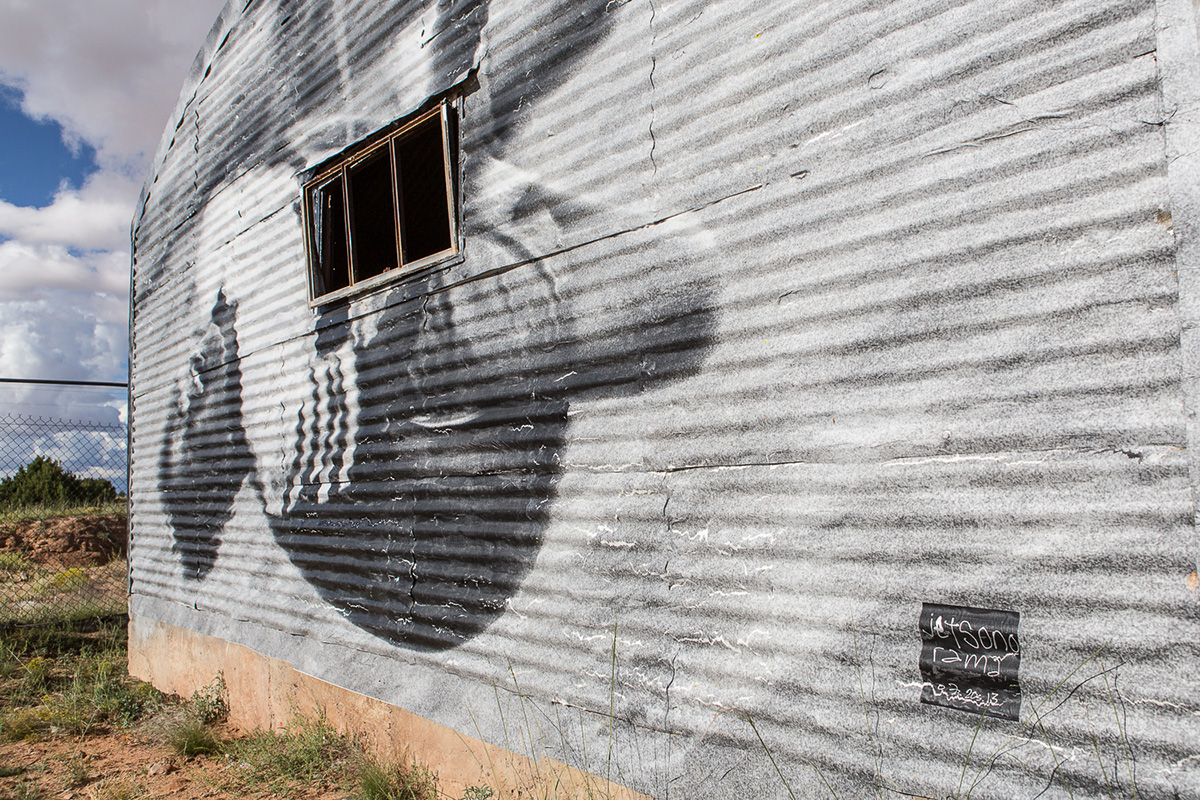 Connecting Beyond the Clinic
While doing his family practice residency in West Virginia, Chip would travel frequently to New York City to see street art and break dancing. He dreamt of joining the Zulu Nation and experimented with graffiti.

He continued to follow the street art scene from the reservation. In 2003, he traveled to Bahia and ended up spending time with local and international artists. Those three months became a turning point. ”The street art community that had embraced me and stirred something and my soul said ‘keep it going!’”

Chip began to make large prints of the photographs in his archives. He boiled wheat paste and drove out at night to paste images on the walls of the roadside jewelry stands. His signature read Jetsonorama. In the morning, he was Dr. Thomas again at the clinic.

“Art informs my medicine most immediately. It gets me out into the community”, Chip describes. “When I’m out there, outside the authority of my doctor’s apron, I am vulnerable. It’s in this interaction that I’m able to make a more equal connection.” 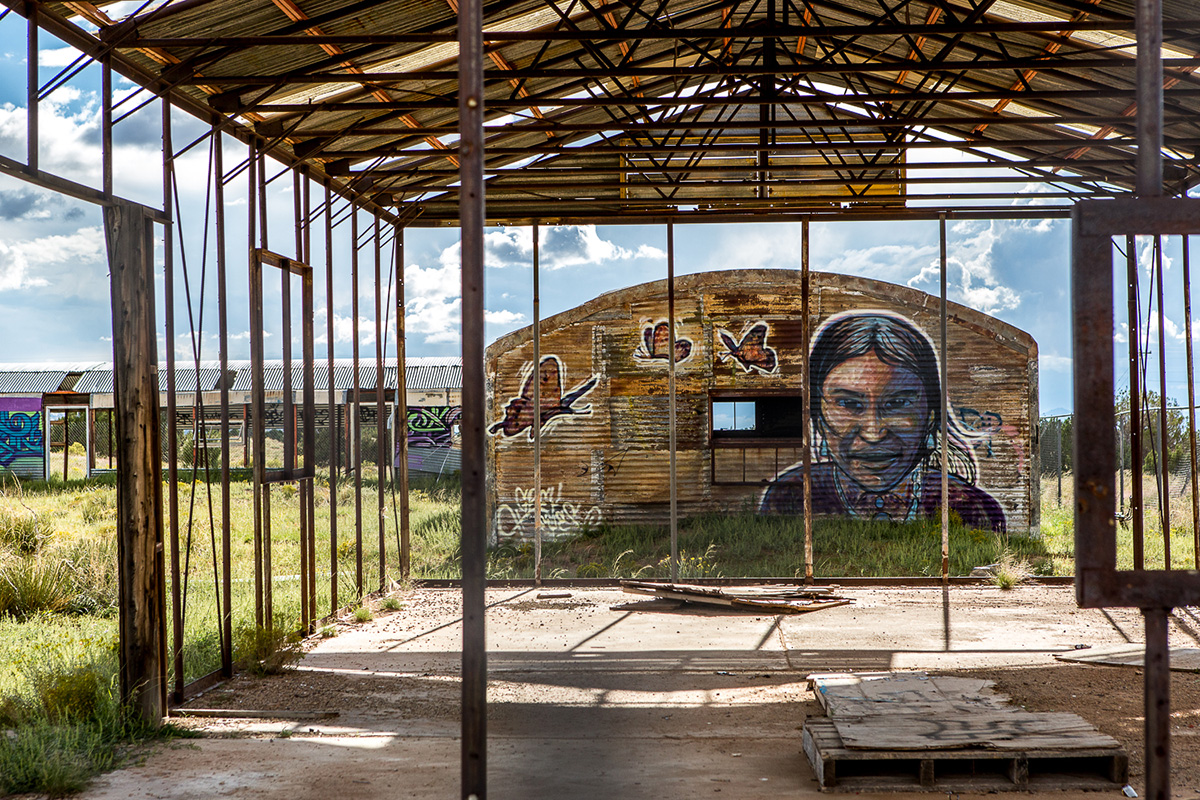 Chip has put the Navajo Nation on the global street art map. ”A lot of artists are keen to come here because this is a very different experience, immersed in the community.” “My hope is that the artist leaves enlightened and that the community feels enriched.”

Building Bridges
The concept of public art doesn’t exist in Navajo culture.In fact, there is no word in the language for art—nor for religion. The only word that could be used to describe both is hózhó. Defining the essence of Navajo philosophy, this word encompasses beauty and harmony, and expresses the idea of striving for balance. At the same time, art is omnipresent in the culture, for example in hand-woven rugs, in elaborate hand-woven baskets, and in exquisite hand-crafted jewelry; and in rock art, images pecked into boulders and cliff walls, the pictorial tradition goes back centuries.

Chip has had to consider how to introduce a new art form into a traditional culture. The choice of images is one of the key issues. ”The Navajo have a reputation of being superstitious. If a new image appears somewhere, especially the older generation may regard it with suspicion.” ”Certain images and symbols cannot be presented. For example the image of an owl means that death is imminent.” 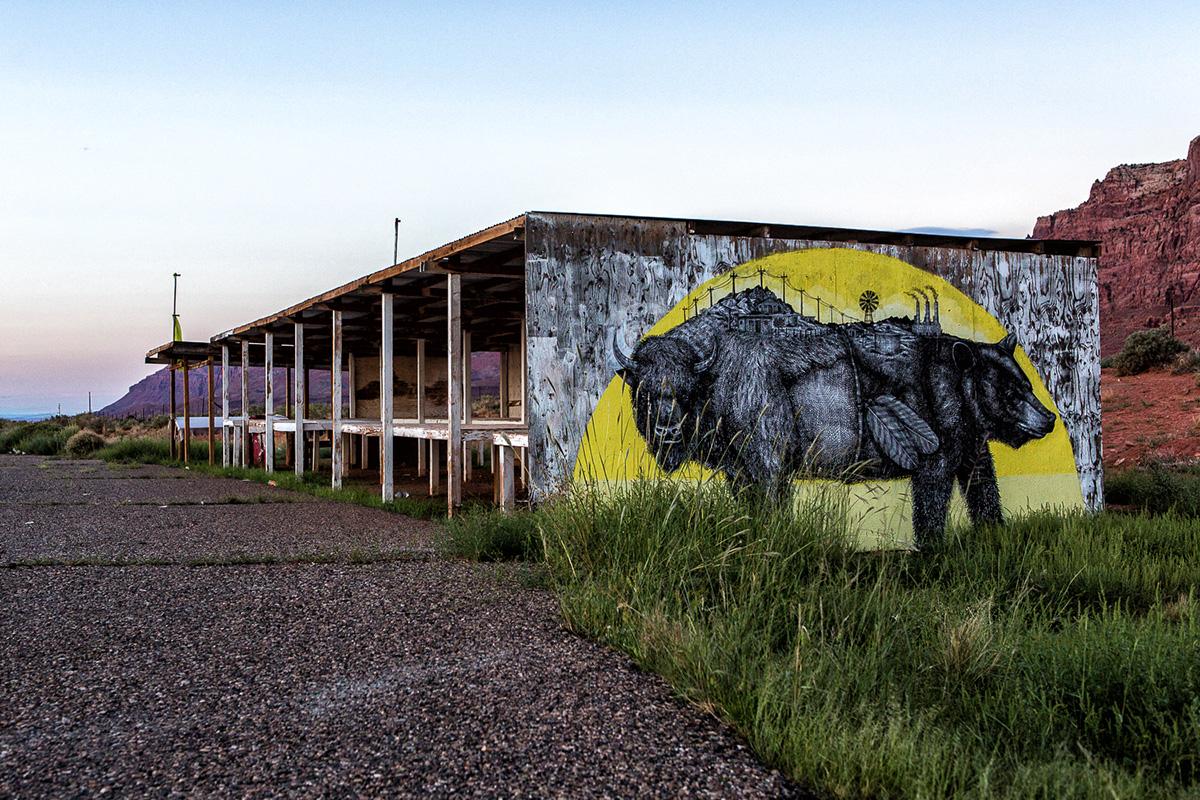 Chip pairs visiting artists with roadside stand owners who rely on their trust on Chip when they allow a stranger to paint their walls. Puerto Rican Alexis Diaz’s work on a stand along Highway 89 reminds me of the fact that over one-third of the US’ fossil fuel reserves are located on or near native lands.

One of Chip’s first works was an image of World War II Navajo Code Talkers. He pasted it at night on the wall of an abandoned jewelry stand. ”When I drove by a week later, I was surprised to see a family repairing the stand.” Chip stopped by to chat and learned that tourists had begun to stop by to photograph the stand. The family had decided to start using it again.

When Chip revealed that it was him who had pasted the image there, the family asked him to place a picture also at the other end, to stop traffic coming from that direction.

This was the first validation from the community to Chip’s art. It was also his first insight into the potential of art to support roadside vendors’ income. “More importantly, I appreciated the potential of this work to bridge cultures and races of people.”

On the vast, sparsely populated reservation, building trust remains an ongoing challenge. . ”Installing art in communities where people don’t know I’m a doctor who’s been here for twenty-six years and that I have a sixteen year-old, half-Navajo son, I defend what I’m doing by telling that my project is a mirror reflecting back to the community the beauty they’ve shared with me.”

Jazz Under the Vast Sky
”Everything is self learned”, Chip emphasizes. “This is all an experiment of ‘what’ll happen if I do this?’” The experiment got its name, The Painted Desert Project, in the summer of 2012 when Chip invited some of his favorite artists to the reservation.

To the non-native artists, Chip sent a package to introduce them to the culture beforehand. It included copies of the Navajo creation story, a beaded craft item and the film Broken Rainbow, a documentary about the forced relocation of twelve thousand Navajos from their ancestral homes in Arizona during the 1970s.  In seeking community acceptance and immersing visiting artists into the community, Chip has also arranged sweat lodge and horse riding sessions where the artists could meet with tribal elders.

On Chip’s invitation, artists from Arizona to New York and Montreal, from Latin America to Europe have painted on the reservation. For Chip, it is important that the visiting artists come with enough time, to allow them to connect with community members, to experience the stunning landscapes under the vast sky and to be inspired to create work that reflects the interplay of cultures and landscape. In this way, Chip describes, the project is “responsive to the moment like jazz.” 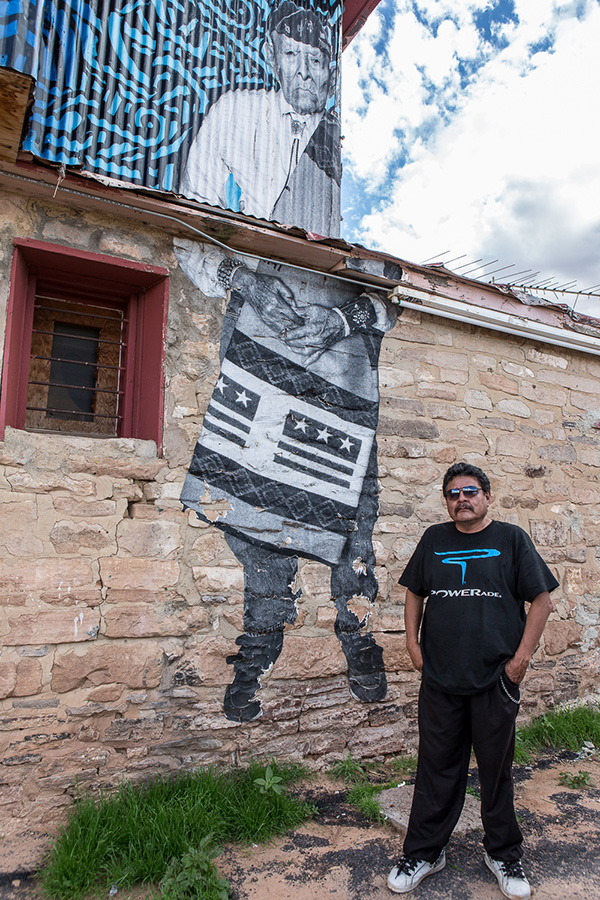 Lorenzo Fowler owns the Old Red Lake Trading Post in Tonalea, AZ. On the wall is an image of his uncle, a respected Navajo Code Talker and Medicine Man who lived to the age of one hundred and one. ”Chip’s images remind our youth of our culture. It’s important”, Lorenzo says. His uncle’s picture is a dialogue-opener: ”Many people stop by to ask about it”. Those people included us, travelers from Finland.

Chip’s vision is to engage the youth in the community. Referring for example to Brooklyn-based artist Swoon and how she says art saved her, he talks about the significance of art in public schools.

So far, bringing youth on board has been challenging. ”Many don’t have a car or other means of transport. The roads are often muddy. And there are many household responsibilities—you can’t go out painting if your grandmother asks you to round up the sheep.” ”If I had more time, I could get a beat-up van to bring youth to the visiting artists”, Chip laughs.

According to Chip, around five thousand people live in the nearby areas, over half of them youth. ”They are interested in tagging and graffiti. Even far off places here have some great pieces.”

What would it take to really get the youth engaged? ”For me, an ideal partner would be an art teacher in the local school with interest in public art and commitment to the community.” “The future of muraling on the rez also depends on someone writing a grant for it.” 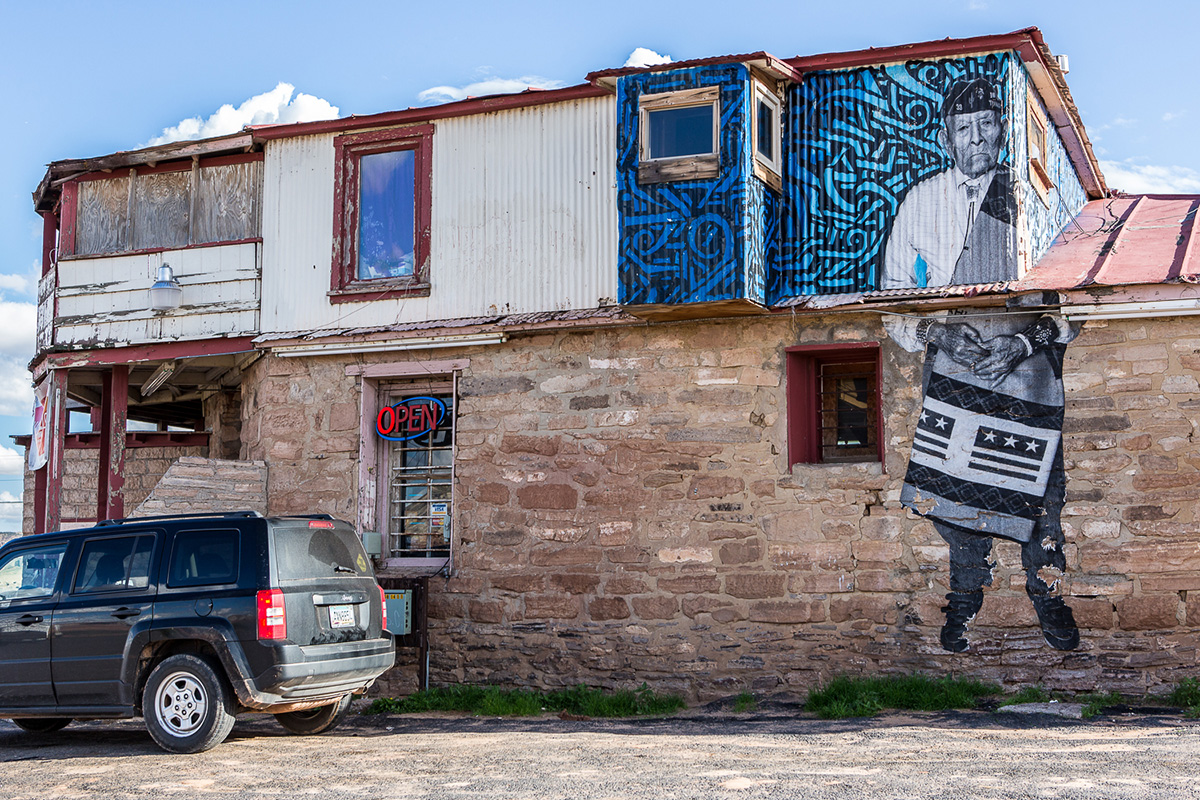 Twinkie Death on the Food Desert

The reservation is a food desert”, Chip states. The term refers to the distance that people must travel to get fresh produce and healthy calories. Here, that distance is long. Junk food, on the other hand, is cheap and everywhere. ”KFC’s highest sales in the US are here, in Window Rock.” Type 2 diabetes, heart disease and hypertension soar above the national average.

In July 2013, a groundbreaking bill was introduced to the Navajo legislature. Aptly named The Twinkie Death Tax, the bill intended to tax junk food while removing taxes on vegetables and fruit. The tax revenue would have been invested in building wellness centers across the reservation.

”The only time that Coca Cola reps have visited the rez was when they came here to advocate against the bill!” Chip vents. The vote was tight but the bill didn’t pass… Yet. It will be reintroduced.

Chip wants to harness his art in support of the bill. In identifying imagery that will speak to the issue, he’s thinking for example about corn and squash that are traditional to the area. 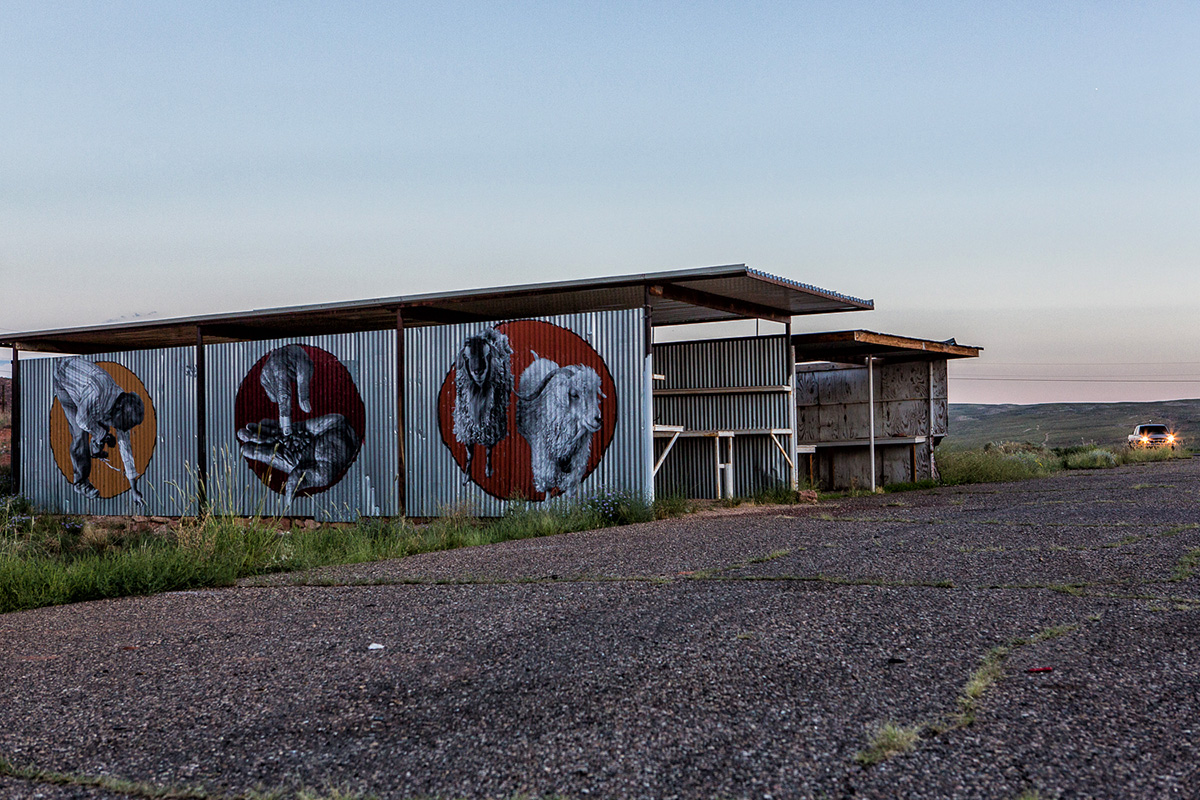 An Open Future
Amidst the rich and inspiring conversation, it’s difficult to keep in mind that Chip makes art alongside his full-time doctor’s job. While this all keeps him busy, life in a remote location is also lonely. ”During my twenty-six years here, I’ve also sacrificed a lot”, he reflects. ”My son is the main reason I’m still here.” Chip spends as much time as possible with his son who lives sixty miles away with his mother. ”When he finishes high school, I don’t know if I’ll be here much longer.”

Where next? Chip doesn’t know yet. “I’m an only child. My best friends are in San Francisco. It would be great to be part of a community.” What Chip does know is that when he retires, he wants to commit himself to street art completely. 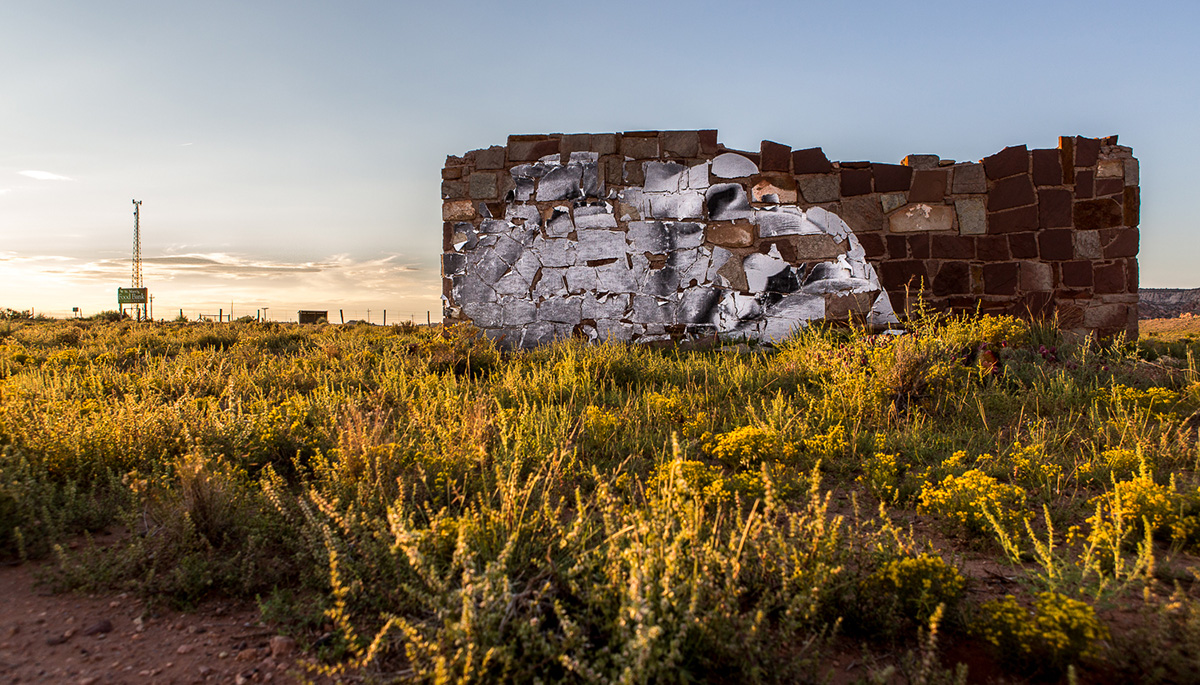 This article originally appeared in CitizenBrooklyn and is republished here with permission. All photos in the article are the work of Maria Jain. She is Ã¢â¬â¹a coordinator for National Committee for UN Women in Finland and co-founder of Kantha, a web store where India’s rich craft tradition meets design that appeals to the contemporary eye.