Home > News > Family Is Helping Others to Heal

Family Is Helping Others to Heal 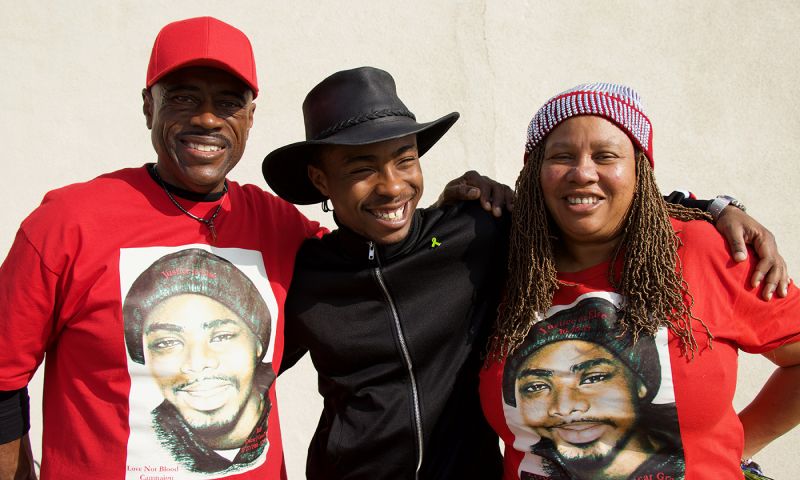 Oscar Grant III was an unarmed Black man killed by a police officer in Oakland, Calif., years before Black Lives Matter drew national attention to the growing number of unarmed Black men, women and children who die at the hands of law enforcement officers—what some scholars are calling an epidemic.

Jan. 1 marked 10 years since the 22-year-old father was fatally shot by the Bay Area Regional Transit officer in the early morning hours of New Year’s Day.

In the decade since his tragic death, Grant’s family has helped to create a police citizen review board of BART, established a foundation, and launched a campaign to not only help bridge the gap between police and the community, but also to build a nationwide network of families affected by such violence.

“That’s a club that nobody wants to be a part of,” says Grant’s aunt, Beatrice X Johnson. “We can offer them love, support, and steps to getting justice, because we are the only ones that truly know what they’re going through.”

The impact of Grant’s death ripped through the country. Millions would come to know his story, which was depicted in the 2013 critically acclaimed film Fruitvale Station.

BART officers had responded to a call about a fight on the Fruitvale station platform about 2 a.m. Grant, who according to reports was not among those fighting, was detained with several others. Bystanders captured videos of the incident. Already restrained, an unarmed Grant was fatally shot in the back by Officer Johannes Mehserle.

A woman and child visit an impromptu memorial for Oscar Grant III on January 7, 2009, at the Fruitvale BART station in Oakland, California. Photo by Justin Sullivan/Getty Images.

The United States has the highest number of police killings than any other industrialized country. In 2018, nearly 1,000 people were killed by police, according to The Washington Post. Of those killed, 38 were unarmed.

Research has recently confirmed what survivors of police violence have known for a long time—the trauma from these type of killings reach far beyond those who personally knew the victim. Entire Black communities are affected.

To help their community heal from Grant’s death, his mother, Wanda Johnson, and uncle Cephus X Johnson, known as Uncle Bobby, along with members of their community, campaigned for the creation of the BART Police Citizen Review Board, which was formed in 2009.

Among their responsibilities, members of the board review citizen allegations of on-duty police misconduct, and recommend and monitor changes to police policies. According to NBC Bay Area, dozens of recommendations from the review board were approved by the BART board in March 2018, such as allowing the independent police auditors to investigate any kind of misconduct allegations.

In 2010, Uncle Bobby founded the Oscar Grant Foundation to help mend the distrust between residents in predominantly Black, high-crime communities and law enforcement. The foundation offers community support through grief sessions as well as youth services and activities such as scholarships, school supplies giveaways, tutoring, and programs, including three basketball teams named after Grant.

He and his wife, Beatrice, later established the Love Not Blood Campaign in 2014. And Wanda Johnson took over as CEO of the foundation.

The purpose of both organizations is to help others who’ve been affected by gun violence, and to create an environment where that violence does not exist.

Love Not Blood works to build a network of families across the country whose loved ones have lost their lives to police or community violence. They offer emotional support through their family response team, which helps families with events, such as vigils or healing circles. They also help them with navigating the criminal justice system, attaining lawyers, attending trials, and creating a safe space for them to tell their stories.

The campaign also holds workshops at conferences and in schools to inspire youth activism.

“We offer services to educate children so they can get activated right away,” Beatrice says. “This is their future. You don’t have to wait until you’re grown to start making changes.”

Uncle Bobby adds that they offer a unique perspective to families when a crisis occurs.

“Families impacted will have a better chance of engaging families that are newly impacted,” he explains. “We give them insight of this whole new trajectory that they’ve been placed on with the murder of their loved one.”

Dionne Smith-Downs, a mother of 14, was put on that new trajectory when she lost her son, James Rivera, to police violence in 2010. Rivera, 16, was shot multiple times by Stockton, California, police officers.

Uncle Bobby reached out to Smith-Downs to let her know she wasn’t alone, and introduced her to Wanda Johnson, who convenes the monthly support sessions at the foundation for mothers whose children have died from gun violence.

The goal of the sessions is to introduce the mothers to the five stages of the grieving process, brainstorm solutions to policing, and talk about ways to improve the relationship between the community and police.

Smith-Downs is one of 15 to 30 participants who attend the Healing Hurting Hearts monthly support sessions. She says coming together regularly with the mothers is empowering.

“My son was 16 years old when he was killed, and I had so many questions,” she said. “No one knows how you’re feeling, but these mothers do.”

Donna Smith, Grant’s godmother and foundation volunteer, is proud of the relationship the foundation has forged with local law enforcement. Over the years, officers have participated in the foundation’s community events.

“When we have the backpack giveaways or scholarship events, police officers and firefighters are all lined up on the walls and even out in the lobby. They’re saying, ‘We’re here to support your community and we’re going to be consistent,’” Smith says. “It’s overwhelming to see.”

In addition to building relationships with officers and holding them accountable, the foundation has provided nearly $70,000 in scholarships to youth in the community.

Jafar Bey, a sophomore at University of California, Davis, was awarded a scholarship in 2017.

“[I] can’t really describe how much it’s appreciated,” says Bey, who comes from a large family.

With nine siblings, he says, money can be tight. Two are currently in college.

“Getting the scholarship from the foundation allowed me to go to a prestigious university right away without waiting and having to go somewhere smaller,” he said.

At UC Davis, Bey majors in political science and philosophy, and plans to become a lawyer so that he can help at-risk and disadvantaged youth, who he says often get overlooked.

“They don’t get a chance to see their potential, but the Oscar Grant Foundation allows them to see themselves in a different light and lets them know there are opportunities out there for them to succeed.”

Looking to the future

In March, the foundation will hold its Fourth Annual Gala to commemorate the 10th anniversary of Grant’s death. An unveiling of a mural at the Fruitvale station in Grant’s honor is scheduled. And the family is working toward installing a plaque on the platform as well.

The funds raised from the gala will go toward youth scholarships, travel, flights, and uniforms for the OG Ballers basketball team, Healing Hurting Hearts materials, a building fund for a tutoring center, and more.

“[We want to] really pour love into the community and help with our collective healing,” Wanda Johnson says. “We can’t do this work without the community’s support.”

This article is syndicated from YES! magazine. YES! Magazine reframes the biggest problems of our time in terms of their solutions. Online and in print, we outline a path forward with in-depth analysis, tools for citizen engagement, and stories about real people working for a better world.   Bailey Williams wrote this article for YES! Magazine. Bailey is the audience relations coordinator for YES! She is passionate about intersectional feminism, social justice, and ending violence against people of color. Follow her on Twitter and Instagram.

Surrender is the inner transition from resistance to acceptance, from no to yes.
Eckart Tolle