Home > Everyday Heroes > Hire Just One
There can be little doubt that a certain amount of corporate philanthropy is simply good business and works for the long-term benefit of the investors. --John Mackey 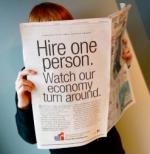 Oct 24, 2010-- During hard economic times, most people and businesses focus on earning and saving money, not giving it away. But one Philadelphia philanthropist believes that donating to charity is the key to boosting the economy and getting Americans back to work. In an effort called "Hire Just One," Gene Epstein is promoting a $250,000 effort, which donates $1,000 to charity in the name of businesses that hire an unemployed person and keep the worker on the payroll for at least six months. In turn, these charities can continue to support job retraining programs, homeless shelters, and other social services. Having already set aside money for the first 250 hires, Epstein envisions that thousands more jobs could be created if others took on his idea, too. (4152 reads)

Man shapes himself through decisions that shape his environment.
Rene Dubos

We've sent daily emails for over 16 years, without any ads. Join a community of 164,153 by entering your email below.