Home > Nature > What Lies Beneath
The real voyage of discovery consists not in seeking new lands but seeing with new eyes.
Marcel Proust 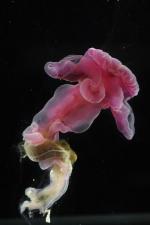 Mar 3, 2011-- In 2000, the Census of Marine Life embarked on a 10-year mission to deepen our knowledge of the ocean. The study involved 2,700 scientists, 80 countries, 600 institutions, 500 expeditions and a staggering 9,000 days at sea. On top of recording tens of millions of individual marine organisms and their locations, it also identifies important climate changes. Among the discoveries of 6,000 potentially new species is a species of shrimp thought to have gone extinct 50 million years ago! (2431 reads)

We've sent daily emails for over 16 years, without any ads. Join a community of 162,850 by entering your email below.