Home > Generosity > 82 Hour Hunger Fast
Bliss does not come from outside. It comes from inside, from serving the people.
Anna Hazare 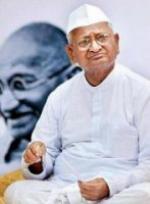 Apr 9, 2011-- Anna Hazare, a 73-year-old Gandhian, sat fasting in the burning sun, and he promises to stay until death -- unless his Indian government agreed to consider a powerful law that could rid Indian politics of the scourge of corruption. A tall order. Yet, after single-handedly provoking a people's revolution that galavinized millions of his countrymen, the 72-year-old activist who launched what he calls "India's second freedom struggle" is likely to end his four-day hunger strike tonight. It took Anna Hazare about 82 hours of fasting to accomplish every point of an agenda that seemed preposterously ambitious when the week began. (7288 reads)

Read Full Story
What's your reaction? inspiring fascinating courageous hopeful
Take ActionLearn about this inspiring hero that many in India refer to as the Modern Mahatma. [more]

We often take for granted the very things that most deserve our gratitude.
Cynthia Ozick

We've sent daily emails for over 16 years, without any ads. Join a community of 162,850 by entering your email below.