Home > Everyday Heroes > Homeless Man Bails out Banker
Money is not my master. I'm out here for a purpose: to help someone.
Curtis Jackson, Homeless in Chicago 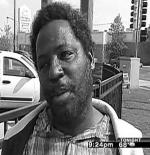 May 13, 2011-- A year ago, everything was going right for her: a good job at a bank in the suburbs and a safe home. But last year, she lost that -- and with her 10-year-old, had to move into a truck. Police threatened to take away her son until she found a safer alternative, so she moved into a hotel for a few nights to sort things out. That's when her angel showed up. A man named Curtis Jackson paid her hotel bill day after day, everyday. It turns out that Curtis isn't a big shot. He himself is homeless. But while on the street, he had always been treated by her with dignity and kindness; so in her time of need, he started raising money for her by panhandling on the streets -- $9,000 since December. (22564 reads)

Read Full Story
What's your reaction? inspiring fascinating courageous hopeful
Take ActionThink of someone who has treated you with kindness in the past, and see if you can honor that in any way, big or small.

It's not how much we give but how much love we put into giving.
Mother Teresa