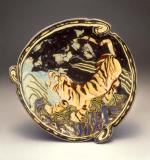 Sep 6, 2011-- A controversial statue led conversations.org founder Richard Whittaker to an unusual artist, Fredric Fierstein. The art piece itself was inspired from a place far off the beaten track. In Fredric's words: "When I've gotten out of the cities I've met people of the earth, I call them. They're not the kind of people you meet in the cities who are trying to hustle you. My guide, who spoke Thai and a few dialects, couldn't speak with this guy. That's how far out he was. I did find out from him, by sign language, that he was my age at that, which was so great! I had, I don't know if you'd call it a revelation, I realized that guy could have been me and I could have been him. It's so incredible." A rich dialogue follows. (2231 reads)

Read Full Story
What's your reaction? inspiring fascinating courageous hopeful
Take ActionReflect on a radically different and meaningful experience you've had -- does it inspire your own creativity?

You change your life by changing your heart.
-Max Lucado-