Home > Latest DailyGood News > The Learning Curve of Gratitude
The invariable mark of wisdom is to see the miraculous in the common.
Ralph Waldo Emerson

The Learning Curve of Gratitude 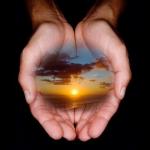 Nov 26, 2012-- "Eight weeks ago, I was released from the hospital after suffering a pulmonary embolism. I had just finished a tour and a week after returning home, severe chest pain and terrible breathlessness landed me in the ER. A scan revealed blood clots in my lungs. Everyone told me how lucky I was. A pulmonary embolism can take your life in an instant. I was familiar enough with the medical term, but not familiar with the pain, the fear and the depression that followed." This real-life story leads into a transformative moment at the check-out counter of a grocery store. (11417 reads)

The clearest way into the Universe is through a forest wilderness.
John Muir

We've sent daily emails for over 16 years, without any ads. Join a community of 245,418 by entering your email below.