Home > Science & Tech > How the Internet Helped Us Learn How To Share
The potential of the average person is like a huge ocean unsailed, a new continent unexplored, a world of possibilities waiting to be released and channeled toward some great good. --Brian Tracy

How the Internet Helped Us Learn How To Share 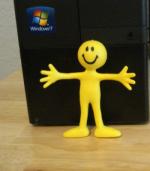 Sep 4, 2013-- In 1996, poet and essayist John Perry Barlow created "A Declaration of the Independence of Cyberspace." It was intended to serve as a bold announcement -- that a new era of human empowerment was near. "We will create a civilization of the Mind in Cyberspace," he offered. "May it be more humane and fair than the world your governments have made before." And though, there were a few first rocky steps -- it seems, humanity is now growing closer to realizing the capacity of 'sharing.' In this article, author Neal Gorenflo offers three most beautiful examples of how the Internet has helped us learn how to 'share.' (16809 reads)

Read Full Story
What's your reaction? inspiring fascinating courageous hopeful
Take ActionThere are so many resources available to help this 'human family' - some simply a few clicks away. Take a few moments today to research how you may put your dreams to action, and how you may utilize social media for the greater good.

We've sent daily emails for over 16 years, without any ads. Join a community of 242,656 by entering your email below.