Home > Generosity > Gandhi 3.0: A Grand Rehearsal of Unconditional Love
There is force in the universe, which, if we permit it, will flow through us and produce miraculous results.
Mahatma Gandhi 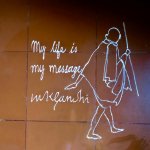 Oct 2, 2018-- In the heart of Mahatma Gandhi's homeland, is a modern-day experiment of the timeless Law of Love. They call it Gandhi 3.0, where "Gandhi" stands for the age-old principle of leading with inner transformation, and "3.0" represents the many-to-many networks that are popularized by Internet. In January 2018, around the 100th anniversary of the Gandhi Ashram, the experiment culminated in a global retreat, the third of its kind since 2014.It is an unusual invitation: Travel across globe to spend a week with 70 changemakers whom you have never met. No agenda. No desired outcomes. No price tag. It is an unlikely constellation of people. 40 participants and thirty volunteers, from over a dozen countries, speaking over a dozen languages. Their ages range from 23 to 82. At any given time, you might see a Japanese spiritual leader sitting next to a Hawaiian elder. A founder of a business school having chai with a young Sufi. A former CEO of a multi-billion company taking a walk with Nobel Peace laureate. A Himalayan yogi chopping potatoes with a Israeli peacemaker. A senior Western Buddhist nun admiring the creativity of a Nepalese artist. Founders of massive NGOs tearing up at the stories of a former submarine commander... As one participant put it, "This is the most diverse group of people I've been with." This in-depth post shares more about a truly unique gathering. (2676 reads)

The only important thing about design is how it relates to people.
Victor Papanek