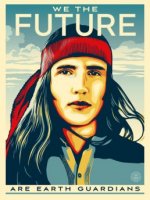 Jan 22, 2019-- For the last 11 years, Xiuhtezcatl Martinez has been in the public eye for his activism, movement building, work with Earth Guardians, and youth empowerment. In 2013, President Obama awarded Xiuhtezcatl the United States Community Service Award. Xiuhtezcatl was the youngest of 24 national change-makers chosen to serve on the presidents youth council. He is the recipient of the 2015 Peace First Prize; the 2015 Nickelodeon Halo Award; the 2016 Captain Planet Award; the 2016 Childrens Climate Prize in Sweden; and the 2017 Univision Premios Agente de Cambio Award. He has addressed the UN General Assembly, given TED Talks, been interviewed by Bill Maher, and made an appearance on the Daily Show with Trevor Noahall by the age of 17. Currently, he is one of 21 young plaintiffs suing the U.S. government for violating our constitutional rights by perpetuating the climate crisis in the trial of the century: Juliana vs. the United States. His has authored We Rise: The Earth Guardians Guide to Building a Movement That Restores the Planet, and just released his first album, Break Free. (6088 reads)

Read Full Story
What's your reaction? inspiring fascinating courageous hopeful
Take ActionLearn more about the work of Earth Guardians - a tribe of young activists, artists, and musicians from across the globe co-creating the future they know is possible. [more]

No matter how little money and how few possessions you own, having a dog makes you rich.
Louis Sabin