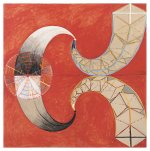 Aug 17, 2021-- "In 1986, those art historians who see art as some form of linear progression 'improving' with time received a rude shock. The Los Angeles County Museum of Art's exhibition The Spiritual in Art -- Abstract Paintings 1890 -- 1985 introduced a hitherto unknown woman artist. The issue was not just that this art was so exquisitely beautiful -- but that the paintings had been painted in the early 20th century.' When the Swedish artist Hilma af Klint died in 1944, she left behind over 1000 paintings, and clear instructions that her work was not to be publicly shown until two decades after her death. When her remarkable paintings finally saw the light of day they created quite a stir...more about her enigmatic life and stunning legacy in this piece. (4482 reads)

Read Full Story
What's your reaction? inspiring fascinating courageous hopeful
Take ActionConsider what serving truth means to you. "Beyond the Visible" is a documentary that brings af Klint's story and contributions to life. For more inspiration, watch the trailer here. [more]

Distance is meant to relate, not separate.
Satish Kumar