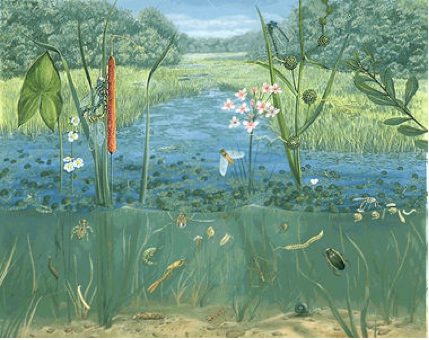 Hope is not wishful thinking. It's not a temperament we're born with. It is a stance toward life that we can choose . . . or not. The real question for me, though, is whether my hope is effective, whether it produces results or is just where I hide to ease my own pain.

What I strive for I call honest hope. And it takes work, but it is good work. It is work I love. I began this book suggesting that it starts with getting our thinking straight. Since we create the world according to ideas we hold, we have to ask ourselves whether the ideas we inherit and absorb through our cultures serve us. We can only have honest, effective hope if the frame through which we see is an accurate representation of how the world works.

The good news is that we face this historic challenge just as our understanding of life's rich complexity, and human nature itself, is expanding exponentially. I am pretty sure, for example, that I'd never even heard the word "ecology" until I was in my twenties. And that was only because I was fortunate enough to marry one of our country's most brilliant ecological thinkers, the late Marc Lappé. Now we are realizing that ecology is not merely a particular field of science; it is a new way of understanding life that frees us from the failing mechanical worldview's assumptions of separateness and scarcity.

So here, in this final chapter, is an invitation to explore what it means to think like an ecosystem. Since ecology is all about interconnection and unending change, creating patterns of causation that shape every organism and phenomenon, "thinking like an ecosystem" for me means living in the perpetual "why." It's keeping alive the two-year-old mind that accepts nothing simply as "the way it is" but craves to know how something came to be. It's understanding that all organisms emerge with specific potential, including the human organism, but its expression is enormously shaped by context.

So, if we want life to thrive, we keep foremost the question, What conditions enhance life? And, more specifically, what specific conditions bring out the best in our species? My hypothesis is that three conditions — the wide and fluid dispersion of power, transparency, and an assumption of mutual accountability — are at least a good part of the answer. An eco-mind is also able to see that our own species' thriving, through our consciously creating the essential context for that thriving, determines the well-being, even the continuation, of other species and whether key dimensions of our wider ecology remain conducive to life.

Shifting from the mechanical assumption of separateness and seeing our societies as ecosystems, we get curious about how aspects interact. And, writes Oxford historian Theodore Zeldin, "It is only curiosity that knows no boundaries which can be effective against fear.". . .

Using our eco-minds, we soon realize that in our complex human ecology, many of the most important causal interactions may not immediately meet the eye — just as they don't in the wider ecosystem: When you or I look at a forest, for example, we see distinct trees. We don't see that beneath the forest floor trees intermingle for mutual support, sometimes through their roots, sometimes through "mats of cooperating fungi," explains the late sustainability genius Donella H. Meadows. Mycelia, the underground part of fungi, can spread "cellular mats across thousands of acres."

It's the context, stupid!

Thinking like an ecosystem means seeing everything in context, or at least giving it our best shot. By this I mean that, with an eco-mind, we realize that what's "good" in one context might bring disaster in other.

I first think jatropha. Never heard of it? Jatropha is a small tree whose nonedible but oil-rich seeds can be turned into a clean fuel. In parts of rural Africa and Asia, this oil liberates small farmers from hours of daily wood gathering and continuing forest loss. It grows well in poor soils with little rainfall and can be interspersed with other crops, helping to prevent erosion. The tree's smell repels hungry animals, protecting nearby crops. And a poor farmer selling jatropha oil in the West African country of Mali, for example, can double his or her income in the first year of planting jatropha, while not significantly decreasing yields of other crops in the same field.

Jatropha needs no pesticides and no fertilizer beyond the residue returned to the soil after oil is pressed from the plant's nuts. Compare those gains with other biofuel plants like corn or sugar cane, which actually displace crops that could feed people directly and use huge amounts of water, fertilizer, and pesticides.

So what's not to like? Poor farmers, big winners — and environment benefits too.

Now, place the very same plant in another context.

Several years ago the government of India began backing the spread of large jatropha plantations, with the ambitious goal of producing enough biofuel from its seeds to significantly reduce dependency on imported oil. Here, empirical results from the southern state of Tamil Nadu reveal that jatropha cultivation is not pro-poor at all, say scholars writing in the Journal of Peasant Studies. "Jatropha cultivation favors resource-rich farmers," they write. Instead of aiding the growth of food crops, as in the Mali story, jatropha plantations in India have replaced food crops and helped push poor farmers off the land.

This contrast in outcome reflects the web of relationships in which the plant grows.

Once seeing through a contextual eco-lens, we also realize that what might be perceived as a single change in a community — whether animal, vegetable, or mineral — can create endless ripples. Hearing, for example, the word "organic," a lot of us see green — maybe a curly kale in a lush field. For most people, it's a package of farming and eating without pesticides. But as we learn to think like ecosystems, the word "organic" can come to evoke vastly wider associations. A recent UN study, Organic Agriculture and Food Security in Africa, beautifully teases out a few organic ripples that might surprise.

African farmers who cultivate beneficial insects to control pests, the report finds, develop a lot more knowledge and skills than they did by just spraying pesticide. Where farmers are building on indigenous knowledge, they also experiment more to solve problems instead of merely relying on what a corporate input supplier tells them.

Imagine the greater self-confidence and resiliency in facing climate challenges.

Organic farming also leads to improved health, the report notes, including less malaria in rice-fish zones. Plus, the improved nutritional value of organic produce, along with a greater variety of foods, strengthens people's immune systems, particularly vital to HIV/AIDS sufferers. "Extending the life of a farming parent [with the disease] by several years could mean the difference between life and death for the children left behind," notes the report. Imagine the ripples, where 11 million children in sub-Saharan Africa are already HIV/AIDS orphans.

Organic farming "can undoubtedly reduce poverty" because of increased production selling at higher prices. And because some of the additional income from greater food production goes to paying school fees, "education of the wider community" increases, notes the study.

And then there's the female ripple. In many communities using imported seeds and chemicals, women on their own couldn't get access to these inputs or credit to buy them. (In Africa women receive less than 10 percent of the credit going to small farmers.) But once taking up organic practices, and thus freed from dependency on credit, women gained more equal footing with men. Their output could then grow, providing surplus to sell in the market and helping the whole family.

This report also tells us that, because organic practices can produce more food, hunger is displacing fewer people from their communities. (A separate University of Michigan study found that if the entire world were to move toward agroecological approaches, food output could increase substantially.) Some people are even migrating back to their organic farming villages, as more vibrant local economies offer more jobs.

Finally, climate: In my daughter Anna Lappé's Diet for a Hot Planet, we learn about why the food and agricultural system contributes about a third of the gases heating our planet. So, as explored [earlier], this move away from extractive, chemical farming means facing down climate chaos. Now, there's a really welcome ripple.

Clearly, one change — organic farming — is not one change at all. Even M. S. Swaminathan, celebrated Indian champion of the 1960s Green Revolution — or what I call "dependency agriculture" because it made farmers dependent on corporate-controlled chemicals and seeds — now recommends the direction this report from Africa highlights: toward technologies "rooted in the principles of ecology, economics, gender and social equity, employment generation, and energy conservation." He calls for research "based on an entire farming system."

For me, Swaminathan's shift of perspective is yet more striking evidence that it's possible for any of us to rethink even long-held assumptions.

Excerpted with permission from EcoMind: Changing the Way We Think, to Create the World We Want, by Frances Moore Lappé (New York: Nation Books, 2011)

The real voyage of discovery consists not in seeking new lands but seeing with new eyes.
Marcel Proust