Life Comes From It: Navajo justice 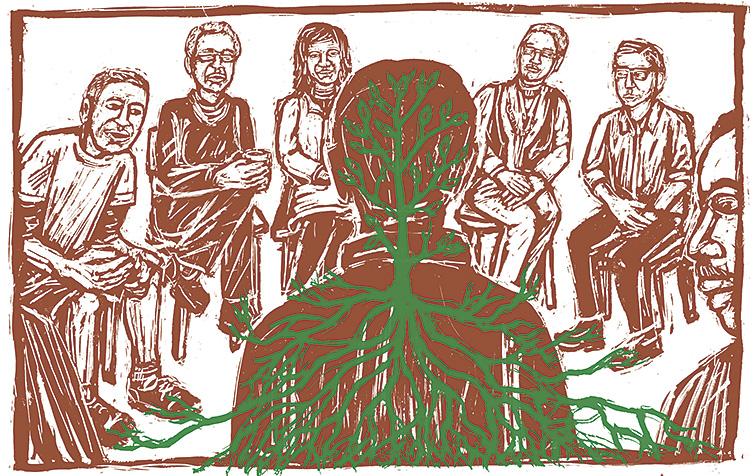 A "vertical" system of justice is one that relies upon hierarchies and power. That is, judges sit at the top presiding over the lawyers, jurors, and all participants in court proceedings. The justice system uses rank, and the coercive power that goes with rank or status, to address conflicts.

Power is the active element in the process. A decision is dictated from on high by the judge, and that decision is an order or judgment which parties must obey or face a penalty. Parties to a dispute have limited power and control over the process.

The goal of adversarial law is to punish wrongdoers and teach them a lesson. Adversarial law and adjudication offer only a win-lose solution; it is a zero-sum game. Navajo justice prefers a win-win solution.

For centuries, the focus of English and American criminal law has been punishment by the "state," with little regard for the rights and needs of victims. They are ignored, and the result is that no real justice is done. There are many victims: family members, relatives, and the community; people who are affected by both the dispute and the decision. Often, the perpetrator is a victim as well, in a climate of lost hope and dependence upon alcohol or other means of escape.

When outsiders intervene in a dispute, they impose moral codes upon people who have moral codes of their own. The subjects of adjudication have no power, little or no say about the outcome of a case, and their feelings do not matter.

Within the horizontal justice model, no person is above the other. A graphic model often used by Indians to portray this thought is a circle. In a circle, there is no right or left, no beginning or end. Every point (or person) on the line on a circle looks to the same center as the focus. The circle is the symbol of Navajo justice because it is perfect, unbroken, and a simile of unity and oneness.

The Navajo word for "law" is beehaz-aanii. It means something fundamental and absolute, something that has existed from the beginning of time. Navajos believe that the Holy People "put it there for us." It’s the source of a healthy, meaningful life. Navajos say that "life comes from beehaz-aanii," because it is the essence of life. The precepts ofbeehaz-aanii are stated in prayers and ceremonies that tell us of hozhooji – "the perfect state."

Imagine a system of law that permits anyone to say anything they like during the course of a dispute, and no authority figure has to determine what is "true." Think of a system with an end goal of restorative justice, which uses equality and the full participation of disputants in a final decision. If we say of law that "life comes from it," then where there is hurt, there must be healing.

To the Navajo way of thinking, justice is related to healing because many of the concepts are the same. When a Navajo becomes ill, he or she will consult a medicine man. A Navajo healer examines a patient to determine what is wrong, what caused the illness, and what ceremony matches the illness to cure it. The cure must be related to the cause of the illness, because Navajo healing works through two processes: it drives away or removes the cause of illness and it restores the person to good relations in solidarity with his or her surroundings and self. Patients consult Navajo healers to summon outside healing forces and to marshal what they have inside themselves for healing.

The term "solidarity" is essential to an understanding of both Navajo healing and justice. The Navajo understanding of "solidarity" is difficult to translate into English, but it carries connotations that help the individual to reconcile self with family, community, nature, and the cosmos – all reality. That feeling of oneness with one’s surroundings, and the reconciliation of the individual with everyone and everything else, is what allows an alternative to vertical justice to work. It rejects the process of convicting a person and throwing the keys away in favor of methods that use solidarity to restore good relations among people. Most importantly, it restores good relations with self.

The process – which in English we call "peacemaking" – is a system of relationships where there is no need for force, coercion, or control. There are no plaintiffs or defendants; no "good guys" or "bad guys."

Navajos do not think of equality as treating people as equal before the law; they are equalin the law. Again, our Navajo language points this out in practical terms: When a Navajo is charged with a crime, in the vertical system of justice the judge asks (in English), "Are you guilty or not guilty?" A Navajo cannot respond because there is no precise term for "guilty" in the Navajo language. The word "guilt" implies a moral fault which demands punishment. It is a nonsense word in Navajo law because of the focus on healing, integration with the group, and the end goal of nourishing ongoing relationships with the immediate and extended family, relatives, neighbors, and community.

To better comprehend Navajo justice we must understand distributive justice. Navajo court decisions place more importance on helping a victim than finding fault. On the other hand, compensating a victim in accordance with the victim’s feelings and the perpetrator’s ability to pay is more important than using a precise measure of damages to compensate for actual losses.

Another unique aspect of Navajo justice is that the relatives of the one who causes injury are responsible to compensate the one hurt, and the relatives of the injured party are entitled to the benefit of the compensation. Distributive justice is concerned with the well-being of everyone in a community. If I see a hungry person, it does not matter whether I am responsible for the hunger. If someone is injured, it is irrelevant that I did not hurt that person. I have a responsibility, as a Navajo, to treat everyone as if that person was my relative. Everyone is part of a community, and the resources of the community must be shared with all.

Distributive justice abandons fault and adequate compensation (a fetish of personal injury lawyers) in favor of assuring well-being for everyone. Restoration is more important than punishment. These dynamics are applied in a modern legal institution – the Navajo Peacemaker Court.

Navajos have experienced the vertical system of justice for the past 100 years – first in the Navajo Court of Indian Offenses (1892-1959), then in the Courts of the Navajo Nation (1959-present). For over a century, Navajos either adapted the imposed system to their own ways or expressed their dissatisfaction with a system that made no sense to them.

In 1982, the Judicial Conference of the Navajo Nation created the Navajo Peacemaker Court. It is a modern legal institution that uses traditional community dispute resolution in a court based on the vertical justice model. It is a means of reconciling horizontal (or circular) justice to vertical justice by using traditional Navajo legal values. The Navajo Peacemaker Court makes it possible for judges to avoid adjudication and the discontent it causes by referring cases to local communities to be resolved by talking things out.

The Navajo Peacemaker Court takes advantage of the talents of a naat’aanii. That is a traditional Navajo civil leader who is chosen by the community to be the "peacemaker" for his or her demonstrated abilities – wisdom, integrity, good character, and respect by the community.

The civil authority of a naat’aanii is not coercive or commanding; it is a leadership role in the truest sense of the word. A peacemaker is a person who thinks well, speaks well, shows a strong reverence for the basic teachings of life, and has respect for himself or herself and others in personal conduct.

A naat’aanii functions as a guide, and views everyone – rich or poor, high or low, educated or not – as an equal. The peacemaker attempts to bring participants to a final decision that everyone agrees to for the benefit of all. A naat’aanii is chosen for knowledge, and knowledge is the power which creates the ability to persuade others. There is a form of distributive justice in the sharing of knowledge by a naat’aanii, because he or she offers it to the disputants so they can use it to achieve consensus.

Peacemaking is being revived with the goal of nourishing justice in Navajo Nation communities. The reason is obvious: life comes from it. Communities can resolve their own legal problems using resources they already have to make decisions the traditional Navajo way.

Article reprinted with permission. Originally published in Spring 1994 on page 29 of The Ecology Of Justice (IC#38), Copyright (c)1994, 1997 by Context Institute. Robert Yazzie grew up in a traditional area of the Navajo Nation, studied law, and started his career as a lawyer in Navajo Nation courts. After seven years as presiding judge of the district court in Window Rock, Arizona, he was appointed Chief Justice of the Navajo Nation in 1992.

A creative mind sees every pile of "junk" as a jigsaw puzzle.
Steve Supple