Seeking Better Ways of Thinking & Being

In August 2016 DailyGood featured the powerful story of Buddhas On Death Row -- a multi-dimensional collaboration between two pen friends, one of them a woman in Finland, the other a man on Death Row in the United States. Here is a follow-up piece on their journey as it continues to unfold...

Note: Saturday, September 24th 2016 there will be a global conference call with Maria Jain, the Finnish half of this remarkable duo. You can learn more about the call, and RSVP here.

Art, inner cultivation, and friendship. Buddhas on Death Row illuminates a profound journey unfolding in the darkest of places, sending rays of light to the outside.

The small street-level space that had been a pop-up office for fresh Helsinki-based start-ups, transformed perfectly into a gallery. A long table, dozens of colorful post-its, and a bulky arcade game gave way to mixed-media artworks and narratives arranged on the walls, and a 1:1 outline of a solitary confinement cell taped onto the floor.

A decal on the window announced: Buddhas on Death Row. 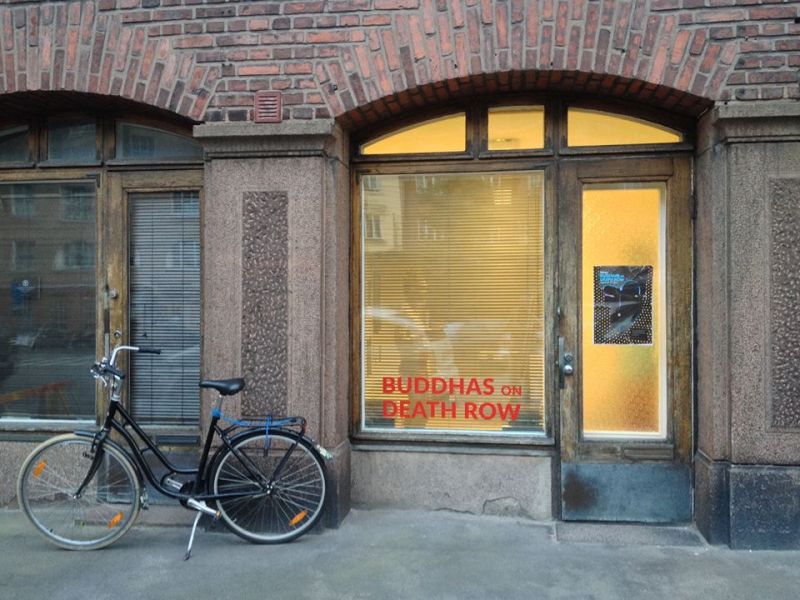 The evening before the opening

The quiet street in the capital of Finland was now host to an art exhibition telling the story of Moyo, an inmate living on Death Row in the United States. How did this happen?

In the spring of 2014, I stumbled upon the website of a prison pen pal initiative. I hadn’t known that something like this existed. Curious, I explored the site. The mission of fostering positive contacts resonated with me.

Among the thousands of ads, I saw Moyo’s. We were the same age. At the time when I was fresh into my studies at the university, Moyo had received the death sentence for taking two lives. The common denominators of where we now stood on our life paths were yoga, meditation, and art.

I decided to write to Moyo. A snail-mail conversation began, criss-crossing the Atlantic at a speed of up to two weeks one-way.

Moyo discovered art in prison. In the isolation of a solitary cell, it provided him the space to begin to deal with difficult emotions, to reclaim his narrative, to work towards transformation. In the beginning this space was, he says, “filled with pain, anger and sadness... It was simply my worst in image form.”

“Then, after some years of this and after reading Alex Grey’s book The Mission of Art, I realized that art can be used to uplift and heal.” 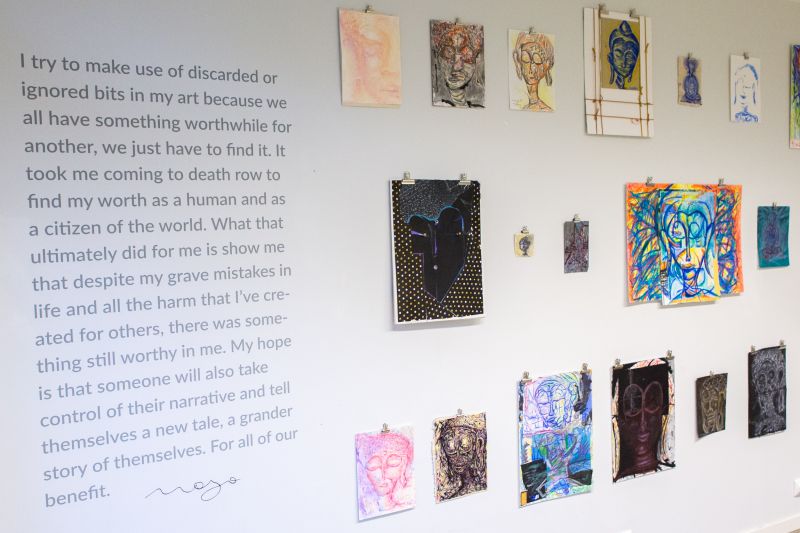 We all have something worthwhile for another. We just have to find it.

Moyo began making portraits of the Buddha. It dawned to him that by studying this image, and what it means, he might get closer to its essence: “Maybe that would do something good for me and in turn for someone else as well.”

In late 2015, I received one such study as a gift from Moyo. The serene portrait of “Yogini” was colored in vibrant pastels. At the same time, Moyo shared how he would like to work on creative projects that make use of his life force for the good of more than himself.

A seed was sown in the soil of my mind: I must organize an art exhibition for Moyo. He agreed to the idea. With no clear idea of how, where, when, we began walking the path.

On the way, the right people just came along to join hands with us to make it happen. When we opened the exhibition on 11 August, not everyone fit in the space at once. During the following eleven days, nearly 300 people visited. And stayed for a good while.

Each day, it was an honor to hold the space as they engaged with Moyo’s works and story. I witnessed their gazes traveling back and forth between the works on the wall and the catalogue in their hands, their bodies leaning forward for closer looks and stepping back to zoom out, their feet measuring the space within the solitary cell’s outline on the floor. I witnessed their focused eyes as they read the eight framed pages of Moyo’s typewritten response to my question: “What does reading mean to you?” 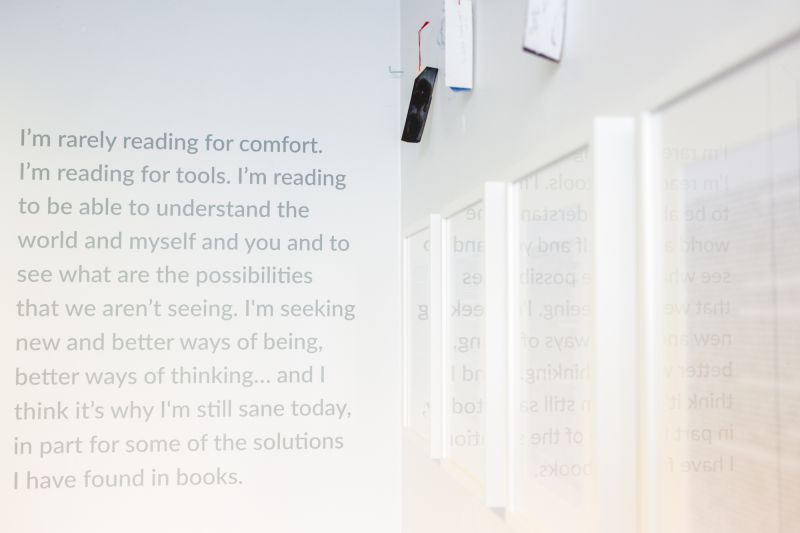 Better ways of thinking and being.

A special quality was palpable in all this: it was a certain openness of the heart. It manifested in the silent presence, in the reflections shared, and in the hugs exchanged between strangers.

I remember the quiet man whose eyes welled up when he received the gift of the exhibition poster. And the older lady, herself an artist, who for whom it was difficult to write her name in the guestbook because it was too low on the window sill; When I offered to hold the book up for her, she said: "No need, I will get on my knees, this is worth it."

One visitor shared how she had recently learned about the ancient Greek concepts for time: chronos – the chronological time or chronos, and kairos – the moments that shift you.

“For those who are courageous enough to enter your work with an open heart, they have an opportunity to experience that [kairos]”, she said.

There were also doubtful comments such as “Where are the exhibitions for crime victims?” This is a vital question.

On the journey of Buddhas on Death Row, I have learned how so much of crime survivors' pain goes unhealed-- and that sometimes, it is the person who harmed that can make the greatest contribution to a survivor's healing.

Moyo says: “I have committed some grave acts and I will never be able to undo them. Yet the very least I can do is to improve myself.”

This is the space from which he offers his works.

Having experienced this space, once visitor said: “So many thoughts, so many questions. No complete answers. Just a journey that invites you to pause for a moment.” 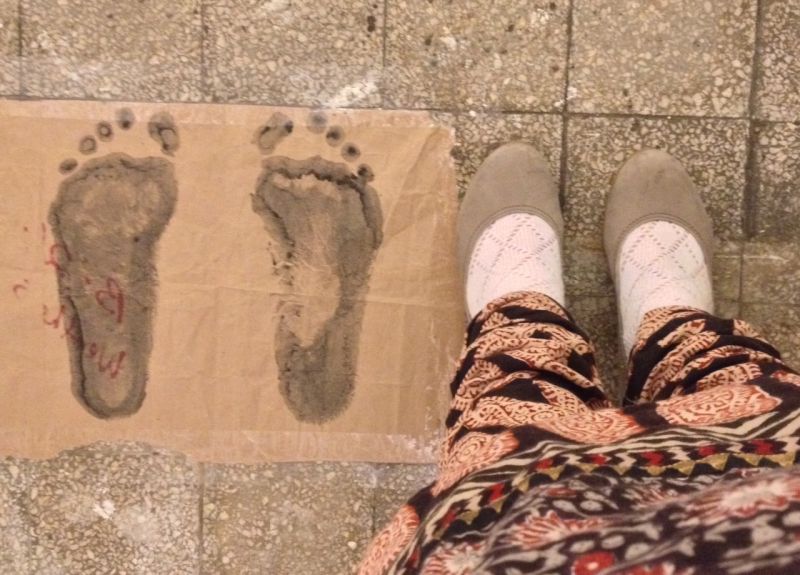 From his solitary cell across the ocean, Moyo was deeply present in Helsinki.

And another: “You are a peer who is sharing what you have discovered, a piece of peace, so that others who are on their own tight ropes can get reassurance that it is worth it to keep going. I am grateful you are doing this. And for humanity's sake it is necessary.”

“I feel bigger than me”, Moyo described his feelings on the opening day.

“It is one thing to read of and to think of expansion, but altogether another to experience it.”

He reflected how bringing the exhibition to life, the ups and downs of the journey, had been a practice of listening, of trust, of letting go of control and of collaborating in the spirit of friendship and community.

As part of Buddhas on Death Row, I reached out to friends and family to mail their reflections and responses to Moyo’s opening of heart. That sharing created powerful ripples, including this note from Moyo:

“All this love and belief in me from all these lovely people who love so naturally and purely is having me ask what is the real me? Is it my closed-hearted moments or am I truly an endless river of free-flowing love?

“I look in the mirror after hearing the thoughts of these lovely people, trying to see what they see. And I see it. I will do my best to pass this gift of awakening on to others… That’s key, right? To pass it on down the line, around and around?” 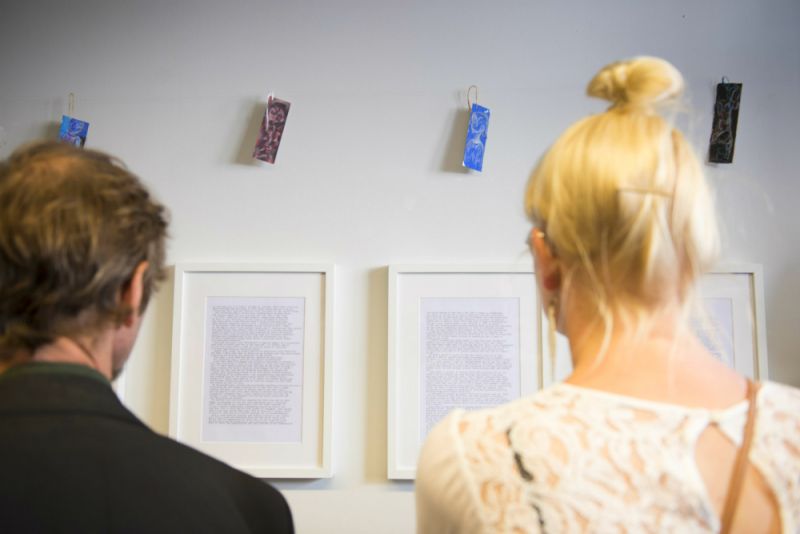 “Thank you, you taught me something today”, excerpt from the exhibition guestbook

Follow Buddhas on Death Row on Facebook. This month Maria Jain is traveling to the United States as part of an effort to bring more awareness to Moyo's work and contributions. You can reach her here.

It is not the mountain we conquer, but ourselves.
Sir Edmund Hillary