When I was six or seven years old, growing up in Pittsburgh, I used to 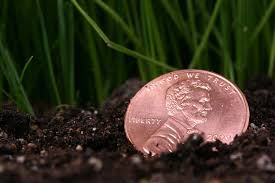 take a precious penny of my own and hide it for someone else to find. It was a curious compulsion; sadly, I’ve never been seized by it since. For some reason I always “hid” the penny along the same stretch of sidewalk up the street. I would cradle it at the roots of a sycamore, say, or in a hole left by a chipped-off piece of sidewalk. Then I would take a piece of chalk, and, starting at either end of the block, draw huge arrows leading up to the penny from both directions. After I learned to write I labeled the arrows: SURPRISE AHEAD or MONEY THIS WAY. I was greatly excited, during all this arrow-drawing, at the thought of the first lucky passer-by who would receive in this way, regardless of merit, a free gift from the universe. But I never lurked about. I would go straight home and not give the matter another thought, until, some months later, I would be gripped again by the impulse to hide another penny.

It is still the first week in January, and I’ve got great plans. I’ve been thinking about seeing. There are lots of things to see, unwrapped gifts and free surprises. The world is fairly studded and strewn with pennies cast broadside from a generous hand. But—and this is the point—who gets excited by a mere penny? If you follow one arrow, if you crouch motionless on a bank to watch a tremulous ripple thrill on the water and are rewarded by the sight of a muskrat kid paddling from its den, will you count that sight a chip of copper only, and go your rueful way? It is dire poverty indeed when a man is so malnourished and fatigued that he won’t stoop to pick up a penny. But if you cultivate a healthy poverty and simplicity, so that finding a penny will literally make your day, then, since the world is in fact planted in pennies, you have with your poverty bought a lifetime of days. It is that simple. What you see is what you get.

…For a week last September migrating red-winged blackbirds were feeding heavily down by the creek at the back of the house. One day I went out to investigate the racket; I walked up to a tree, an Osage orange, and a hundred birds flew away. They simply materialized out of the tree. I saw a tree, then a whisk of color, then a tree again. I walked closer and another hundred blackbirds took flight. Not a branch, not a twig budged: the birds were apparently weightless as well as invisible. Or, it was as if the leaves of the Osage orange had been freed from a spell in the form of red- winged blackbirds; they flew from the tree, caught my eye in the sky, and vanished. […] These appearances catch at my throat; they are the free gifts, the bright coppers at the roots of trees.

It’s all a matter of keeping my eyes open.

The secret of seeing is, then, the pearl of great price. If I thought he could teach me to find it and keep it forever I would stagger barefoot across and hundred deserts after any lunatic at all. But although the pearl may be found, it may not be sought. The literature of illumination reveals this above all: although it comes to those who wait for it, it is always, even to the most practiced and adept, a gift and a total surprise. I return from one walk knowing where the killdeer nests in the field by the creek and the hour the laurel blooms. I return from the same walk a day later scarcely knowing my own name. Litanies hum in my ears; my tongue flaps in my mouth Ailinon, alleluia! I cannot cause light; the most I can do is try to put myself in the path of its beam. It is possible, in deep space, to sail on solar wind. Light, be it particle or wave, has force: you rig a giant sail and go. The secret of seeing is to sail on solar wind. Hone and spread your spirit till you yourself are a sail, whetted, translucent, broadside to the merest puff. When her doctor took her bandages off and led her into the garden, the girl who was no longer blind saw “the tree with the lights in it.” It was for this tree I searched through the peach orchards of summer, in the forests of fall and down winter and spring for years. Then one day I was walking along Tinker Creek thinking of nothing at all and I saw the tree with the lights in it. I saw the backyard cedar where the mourning doves roost charged and transfigured, each cell buzzing with flame. I stood on the grass with the lights in it, grass that was wholly fire, utterly focused and utterly dreamed. It was less like seeing than like being for the first time seen, knocked breathless by a powerful glance. The flood of fire abated, but I’m still spending the power. Gradually the lights went out in the cedar, the colors died, the cells unflamed and disappeared. I was still ringing. I had been my whole life a bell, and never knew it until at that moment I was lifted and struck. I have since only very rarely seen the tree with the lights in it. The vision comes and goes, mostly goes, but I live for it, for the moment when the mountains open and a new light roars in spate through the cracks, and the mountains slam.