Whether she’s suited up in a duck costume at a library story hour, preserving Indigenous cultures in Belize, encountering small moments of beauty through free hugs, or blowing bubbles on the NYC subway, Kristin Pedemonti has got a knack for tapping into a depth of humanity around the world.

As a child, Kristin was “always the smallest kid in class— who was not athletic at all, almost legally blind, on top of being slightly hard of hearing”.

After her grandmother taught her to read when she was four, stories became a way to escape and learn about the bigger world around her. In college, she tapped into into a passion for theater and literature. Storytelling just kept finding ways to spring up in her work and life, no matter where she was.

While working as an ovarian cancer researcher at UPenn, Kristin found herself interviewing cancer patients and discovered that the most important question on the medical questionnaire was, “Tell us the story about how you were diagnosed.” From there, she would sit with these women and hear these powerful stories of their illness, and witness the cathartic experience of having a space to tell it.

“You’re the first person who asked me to tell this story,” they would tell her. “Thank you.”

From there, she became a children’s librarian by accident. Living next door to a library, Kristin walked in one night and jokingly read some books out loud to a friend. The library director came over and asked, “Would you like to do that as a job?”

“We’d pay you to do that. Can you start tomorrow?”

And so she did.

Soon, she became the main children’s librarian in a small working class town, and loved every minute of it. Bringing children into the library, sharing stories and inspiring change through their messages.

“We all have something we can contribute, and sometimes we just need someone to pull it out of us,” she remarked.

The Leap of Faith

“You’re the first one I’ve ever met, that’s so fascinating!” he had said. And he went on: “My country—we have so many stories here, but we have this huge problem with literacy—it’s dropped 40% in 15 years time… I just think you have the skill set, I just think you could make a difference here.”

The two kept in touch, and the conversation stirred up notions of full-time storytelling. After a year of deliberating, and the well-wishes of her boss, community, and family members, Kristen leaped.

In 30 days, she had left her job, sold her house before the sign was even in the yard, packed up her things and dove into Belize, where she began traveling back and forth between villages.

While traveling Belize, there were certain stories Kristin would hear again and again. There was Xtabai (ish-ta-bai)—a beautiful woman by day and serpent by night whose tale encouraged children to stay home at night. There were myths about human impacts on the environment. But more than the content of the stories, were the needs of the people and cultures behind them.

Through all the villages, and among all the locals, Kristin consistently returned to the question: “What is it that you need? How can I best serve you?”

“It wasn’t about bringing an agenda from the outside in. One of the things I really learned is a lot of people have really good intentions, but they don’t ask enough about what people really need,” she explained.

As a listener of indigenous stories, Kristin learned that many of these stories were banned from being shared in schools. Mostly because they were misunderstood or mistranslated as heresy in religiously-based schools.

As she began breathing new life into these ancient stories of Belize, Kristin began to travel the world with a tapestry of tales. And she found herself sharing the unifying messages so intricately woven within them:

“The same stories crop up all over the world, because, at the end of the day, we’re all human beings. We all have similar fears and dreams and hopes. And that human condition is so similar, no matter what we look like on the outside, or what our government or religion is.”

An enthusiast of small moments, Kristin points out, “We are so desperate to connect with each other. And when we hug, we’re also releasing endorphins.”

Hooked from the first time she joined a group to give free hugs, she shared a poignant story of a gentleman in New York City:

He watched us for a good 20 minutes. He came over and ask us all these questions: “Why are you doing this? What’s your hidden agenda?”

Finally, he approached and said, “This is so far out of my comfort zone, but I really do need a hug right now.”

So I hugged him. As I’m hugging him, he felt like a rock, like cardboard at the beginning. Then he relaxed and whispered in my ear: “I needed this so much. I just lost my job on Wall Street, and I have no idea how I’m going to tell my wife.”


In any country she’s in, Kristin constantly finds herself sharing these incredible, intimate moments with strangers. In Paris, an autistic boy leapt into her arms, with full eye contact and laughter. Her mother, crying, was completely astounded that he—who doesn’t even make eye contact with family members—would hug a complete stranger.

"I joke that a hug is Wonder Woman’s lasso of truth." 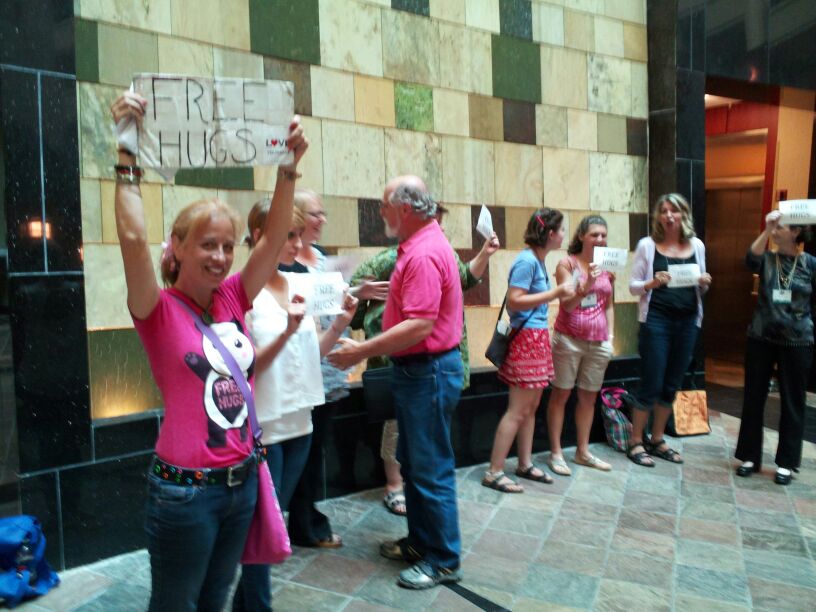 Through all her ripples of lightness and joy, Kristin has also experienced her share of life’s darker moments. Having gone through her own bouts with depression and several challenges in childhood, including her father’s suicide, she shares:

“There’s strength in coming out of darkness… When any of us have faced being in the dark ourselves, or faced some trauma, the positive piece is the empathy we can have for others who may be going through something similar….When we help others, when we reach out—no matter what state of mind we’re in—we cannot help but feel better ourselves.” From start to finish, Kristin’s simplicity of spirit and genuine honesty illuminated us all on the call. In talking about her “leap of faith” decision to do storytelling full-time, she says:

“When you are on a path that is the right one for you—whatever that path is—this clarity will appear.”

It’s apparent from the details of her stories and gentle-yet-exuberant demeanor, Kristin speaks from experience. Whether she’s blowing bubbles on a subway of tired souls, giving free hugs at a busy intersection, or speaking in schools, libraries, conferences and Forest Calls, her spirit is a flame that ignites the storyteller in each of us, building bridges to our hearts.

Kristin Pedemonti divides her time between Allentown, PA, NYC, Belize, and the world, sharing stories and human spirit in a multitude of ways. She recently released a “Superhero 101” CD, which captures her Free Hug encounters around the world, experiences blowing bubbles on the subway, as well as some of her all-time favorite stories. More on her website and a recent KarmaTube feature.

We've sent daily emails for over 16 years, without any ads. Join a community of 242,025 by entering your email below.