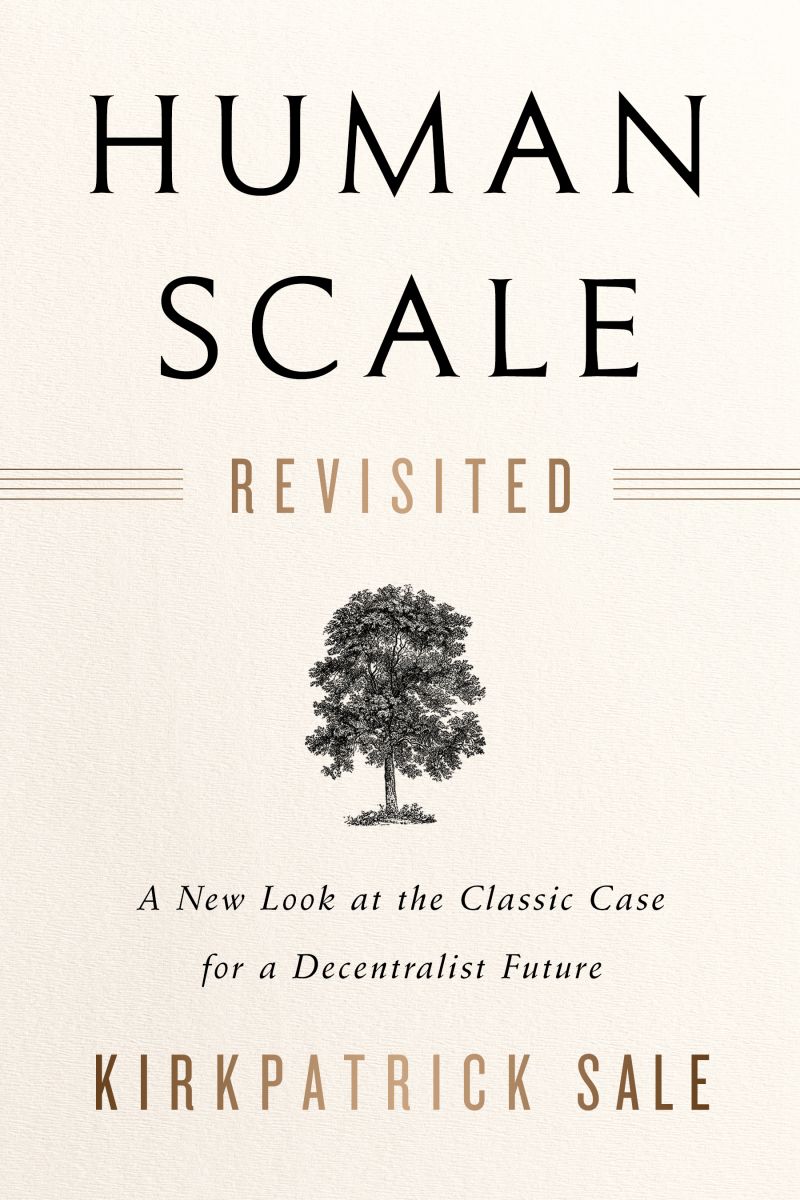 There is no such thing as a society without technology. Homo erectus and Homo sapiens for nearly two million years had the hand-axe, a small, simple, beautiful, and extremely useful tool that could butcher animal carcasses, slice off the meat, and crack open the bone for the nutritious marrow. (The fact that it remained essentially unchanged for all this time suggests that, unlike our own, these societies had a settled social order, were highly cohesive and cooperative, and did not feel any individualistic need to innovate, change for the sake of change.)

The question is not of eliminating technology but of deciding what kind of technology should prevail, which of society’s values should it express. For there is no such thing as neutral technology—rather it comes with an inevitable logic, bearing the purposes and priorities of the economic and political systems that spawn it. Thus a reporter for Automation at the dawn of the computer age could praise a computer system as “significant” because it assures that “decision-making” is “removed from the operator [and] gives maximum control of the machine to management”—a system, that is, that turns the user into a soulless factotum without any power and assures that management retains power to itself, quite what our manufacturing world desires.

A violent empire guided by the principles of capitalism will surely develop technologies that heedlessly wrench resources from the earth in service to a few corporate and financial interests that are protected and nurtured by the political systems that they have commandeered to their ends. It seems fairly clear by now, as we have seen, that these technologies—more powerful and more rapacious than the world has ever known—will end by extracting and consuming so much of those resources, so alter the systems of atmospheric balance and oceanic tolerances, that it will diminish or destroy most of the surface and many of the marine species within the near future. These technologies have been developed to permit the human species to devote itself to every deadly sin but sloth, particularly pride, and it has done so with great skill, ingenuity, and speed. An alternative technology is clearly necessary, one based upon the human scale, in the sense both of being designed for and controlled by the individual and of being harmonious with the individual’s role in the ecosphere.

In an important but generally unnoticed phenomenon, just such a movement has arisen in the last fifty years, starting only in the 1960s and still evolving today, and it has created, tested, and proven an amazing array of soft technologies. Called variously “appropriate,” “green,” intermediate,” or “alternative,” it satisfies the basic criteria of a human-scale technology as set out by the wise Kentucky essayist Wendell Berry in the 1980s: a new tool, he says, should be cheaper, smaller, and better than the one it replaces, should use less energy (and that renewable), be repairable, come from a small local shop, and “should not replace or disrupt anything good that already exists, and this includes family and community relationships.” To which need be added only two other crucial standards—that those family and community relationships embrace all the other species, plants and animals alike, and the living ecosystems on which they depend, and that they be considered, as the Irokwa nation has expressed it, with the interest of the next seven generations in mind.

There is one other good way of assessing human-scale technology, as expressed in a sage axiom of the British philosopher Herbert Read: “Only a people serving an apprenticeship to nature can be trusted with machines.” Far from serving an apprenticeship, modern industrial society works to enslave nature, for the benefit of humanity (or some small part of it), and regards mastery over it as ordained.

Since technology is generally, by its very essence, artificial—that is to say, not natural, a human construct not otherwise found in nature—it tends to distance humans from their environment and set them in opposition to it. “The artificial world,” says Jacques Ellul, the French philosopher, is “radically different from the natural world,” with “different imperatives, different directives, and different laws” such that it “destroys, eliminates, or subordinates the natural world.” In order to avoid the catastrophe that this has brought us to, it is necessary to embed technology with a due regard for the natural world, with a sense of humans as a species, and the individual as an animal, needing its elements for successful survival, including healthy land and air, decent food and shelter, intact communities and nurturing families. Only then, suggests Read, can we start monkeying around with artifacts.

Most of the technology along these precepts has already been developed over the last fifty years. It is now possible to find instruction in multiple books and pamphlets and magazines on—to take just a few—how to build underground houses and aquaculture greenhouses, how to design windmills and solar-powered bicycles, how to grow food by organic, hydroponic, or French-intensive methods, how to establish urban-homesteading projects and eco-villages, how to set up land trusts, food co-ops, and self-examination clinics, and how to construct practically anything you want out of earth, adobe, canvas, wood, stone, hemp, skins, logs, bamboo, or pneumatic balloons. And all of this creativity has been achieved in the face of the dominant, computer-driven technology, which argues that it has some serious durability and sufficiently ardent, widespread support.

Human-scale technology is not some dream or illusion: it exists. And that makes the present age unique. We now know that it is possible to achieve a technology for a wide range of human actions and still be kept within human dimensions and human control, without doing violence to the planet’s resources or ecosystems. We are on the brink of a truly alternative technological paradigm and can enter if we but chose to.

One further point. It should be obvious that there is no necessary contradiction between sophisticated technology and human-scale technology. Rational technologies of the future would not discard everything about contemporary systems but rather evolve from them, leaving aside the dangerous and destructive aspects, absorbing the humanistic and communitarian ones. Obviously there is much in current high technology that is anti-human and brutalizing, but there is also part of it that, however it has managed to slip in, is potentially liberating. In fact in the last twenty years or so there has been a strong trend in the direction of smaller and more decentralized operations: miniaturization has brought about the silicon chip and the proliferation of sophisticated machines available to any home or office; the creation of machines that perform a multiplicity of functions, allowing a wide range of products to be built in a single plant, has opened the way for communities to have an increasing number of goods manufactured locally; and the development of solar energy has pointed the way to the time, not far off, when we can have a completely localized power source no longer dependent on centralized plants.

In an age of high authoritarianism and bureaucratic control in both governmental and corporate realms, the dominant technology tends to reinforce those characteristics—ours is not an age of the assembly line and the nuclear plant by accident. Nonetheless, it must be recognized that there are always many other technological variations of roughly equal sophistication that are created but not developed, that lie ignored at the patent office or unfinished in the backyard because there are no special reasons for the dominant system to pick them up.

For example: sometime before the birth of Christ, Hero of Alexandria designed (and probably built) a steam engine: a fire created boiling water in a cauldron and the steam from it was sent along a tube into a hollow metal ball; two other tubes on opposite sides of the ball expelled the steam, forcing the ball to turn steadily and creating motion that could then be harnessed. The trouble was that neither the rulers of Alexandria nor any other powers in the Mediterranean world had any particular need for such a device, since the muscle power of slaves seemed perfectly adequate and the economic advantages of such a machine were quite unappreciated. It was not until the eighteenth century, in an England of entrepreneurial capitalism, where slavery was outlawed and cheap labor unreliable, that the virtues of steam power were sufficiently appreciated to enlist whole ranks of inventors and investors, many of whom set about unknowingly reinventing Hero’s machine.

Or again. By the late eighteenth century there were two kinds of machines capable of sophisticated textile production in England. One was a cottage-based, one-person machine built around the spinning jenny, perfected as early as the 1760s; the other was a factory-based, steam-driven machine based upon the Watts engine and the Arkwright frame, introduced in the 1770s. The choice of which machine was to survive and proliferate was made not upon the merits of the machines themselves nor upon any technological grounds at all but upon the wishes of the dominant political and economic sectors of English society at the time. The cottage-centered machines, ingenious though they were, did not permit textile merchants the same kind of control over the workforce nor the same regularity of production as did the factory-based machines. Gradually, therefore, they were eliminated, their manufacturers squeezed by being denied raw materials and financing, their operators suppressed by laws that, on various pretexts, made home-production illegal. It is interesting that it was against this technological tyranny that the Luddites in the early nineteenth century actually acted: they were not engaged in the destruction of all machines, as they are usually blamed for, but only those factory-centered machines that threatened to destroy their cottage-based textile industry.

In other words, each politico-economic system selects out of the available range of artifacts those that fit in best with its own particular ends. In our own time, we have seen the great development of machinery that displaces labor (and hence does away with labor problems), but there is a vast array of machinery, as the alternative technologists have proved, that is of equal sophistication and effectiveness but is labor-intensive. A human-scale system would select and develop the latter kinds of machinery, at no especial sacrifice in efficiency but with considerable enhancement of individual worth and ecological well-being.

This excerpt is adapted from Kirkpatrick Sale’s book Human Scale Revisited: A New Look at the Classic Case for a Decentralist Future (Chelsea Green, 2017) and is printed with permission from the publisher.

To see things in the seed, that is genius.
Lao-Tzu

We've sent daily emails for over 16 years, without any ads. Join a community of 160,596 by entering your email below.