My Crazy Summer of Squash 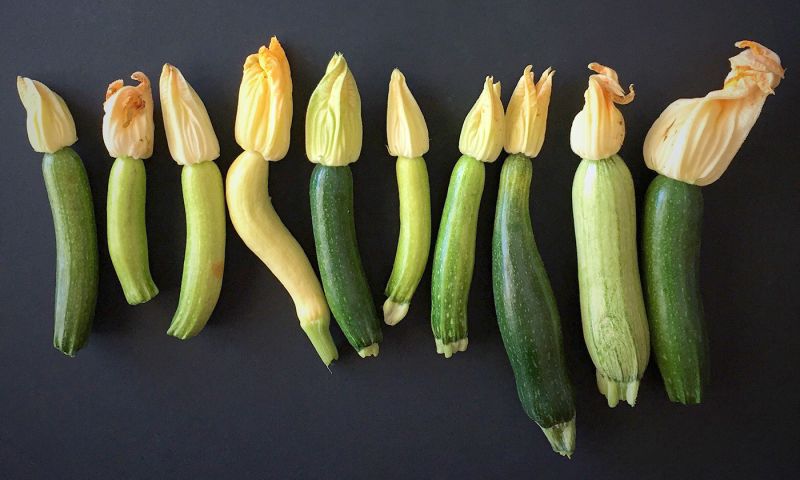 My kids find this hard to believe, but when I was a child I’d never heard of zucchini. We knew of only one kind of summer squash: the yellow crooknecks we grew copiously in our garden. They probably also carried those down at the IGA in summertime, if any unfortunate and friendless soul actually had to buy them. We had three varieties of hard-shelled winter squash: butternuts, pumpkins, and a green-striped giant peculiar to our region called the cushaw, which can weigh as much as a third-grader. We always kept one of these on the cool attic stairs all winter (cushaw, not third-grader) and sawed off a piece every so often for our winter orange vegetable intake. They make delicious pies. And that is the full squash story of my tender youth. Most people might think that was enough.

Not my dad. Always on the lookout for adventure, he went poking into the new Kroger that opened in a town not far from ours when I was in my early teens. Oh, what a brave new world of culinary exotics: They carried actual whole cream pies down there, frozen alive in aluminum plates, and also vegetables of which we were previously unaware. Artichokes, for example. We kids voted for the pies but got overruled; Dad brought home artichokes. Mom dutifully boiled and served them with forks, assuming one could eat the whole thing. We tried hard. I didn’t touch another artichoke for 20 years.

Invasion of the Italian dirigibles

But our lives changed forever the day he brought home zucchinis. “It’s Italian food,” he explained. We weren’t sure how to pronounce it. And while the artichokes had brought us to tears and throat lozenges, we liked these dark green dirigibles a lot. The next year Dad discovered he could order the seeds and grow this foreign food right at home. I was in charge of the squash region of the garden in those days—my brother did the onions—and we were diligent children. I’m pretty sure the point source of the zucchini’s introduction into North America was Nicholas County, Kentucky. If not, we did our part, giving them to friends and strangers alike. We ate them steamed, baked, batter-fried, in soup, in summer, and also in winter, because my mother developed a knockout zucchini-onion relish recipe that she canned in jars by the score. I come from a proud line of folks who know how to deal with a squash.

So July doesn’t scare me. We picked our first baby yellow crooknecks at the beginning of the month, little beauties that looked like fancy restaurant fare when we sautéed them with the blossoms still attached. On July 6, I picked two little pattypans (the white squash that look like flying saucers), four yellow crooknecks, six golden zucchini, and five large Costata Romanescas—a zucchini relative with a beautifully firm texture and a penchant for attaining the size of a baseball bat overnight. I am my father’s daughter, always game for the new seed catalogue adventure, and I am still in charge of the squash region of the garden. I can overdo things, but wasn’t ready to admit that yet. “I love all this squash,” I declared, bringing the rainbow of their shapes and colors into the kitchen.

I was still cheerful two days later when I brought in the day’s 19 squash. And then 33 more over the next week, including a hefty haul of cubit-long Costatas. We split and stuffed them with sautéed onions, bread crumbs, and cheese, and baked them in our outdoor bread oven. All dinner guests were required to eat squash, and then take some home in plastic sacks. We started considering dinner guest lists, in fact, with an eye toward those who did not have gardens. Our gardening friends knew enough to slam the door if they saw a heavy sack approaching.

An armada on the counter

Had we planted too many vines? Should we let the weeds take them early? Oh, constant squash, they never let you down. Early one Saturday morning as I lay sleepless, I whispered to Steven, “We need to get a hog.”

He knew I couldn’t be serious. We didn’t need a pig.

But we did need something to dispatch all this zucchini—some useful purpose for the pyramid of excess vegetable biomass that was taking over our lives.

My family knows I’m congenitally incapable of wasting food. I was raised by frugal parents who themselves grew up in the Depression, when starvation seemed a genuine possibility. I have now, as a grown-up, learned to buy new jeans when mine have patches on the patches, but I have not learned to throw perfectly good food in the garbage. Not even into the compost, unless it has truly gone bad. To me it feels like throwing away a Rolex watch or something. (I’m guessing on that.) Food was grown by the sweat of someone’s brow. It started life as a seed or newborn and beat all the odds. It’s intrinsically the most precious product in our lives, from an animal point of view.

But there sat this pile on the kitchen counter, with its relatives jammed into a basket in the mudroom—just waiting for word so they could come in here too: the Boat Zucchinis.

Sometimes I just had to put down my knives and admire their extravagant success. Their hulking, elongated cleverness. Their heft. I tried balancing them on their heads, on their sides: Right here in the kitchen we had the beginnings of our own vegetable Stonehenge. Okay, yes, I was losing it. I could not stay ahead of this race.

Could they design an automobile engine that runs on zucchini?

It didn’t help that other people were trying to give them to us. One day we came home from some errands to find a grocery sack of them hanging on our mailbox. The perpetrator, of course, was nowhere in sight.

Garrison Keillor says July is the only time of year when country people lock our cars in the church parking lot, so people won’t put squash on the front seat. I used to think that was a joke.

I don’t want to advertise the presence or absence of security measures in our neighborhood, except to say that in rural areas, generally speaking, people don’t lock their doors all that much. The notion of a “gated community” is comprehensible to us only in terms of keeping the livestock out of the crops. It’s a relaxed atmosphere in our little town, plus our neighbors keep an eye out and will, if asked, tell us the make and model of every vehicle that ever enters the lane to our farm. So the family was a bit surprised when I started double-checking the security of doors and gates any time we all were about to leave the premises.

“Do I have to explain the obvious?” I asked impatiently. “Somebody might break in and put zucchini in our house.”

This article is syndicated from YES! magazine. YES! Magazine reframes the biggest problems of our time in terms of their solutions. Online and in print, we outline a path forward with in-depth analysis, tools for citizen engagement, and stories about real people working for a better world. Barbara Kingsolver is an American novelist, essayist and poet.

He who has a why to live for can bear almost any how.
Friedrich Nietzsche

We've sent daily emails for over 16 years, without any ads. Join a community of 246,294 by entering your email below.