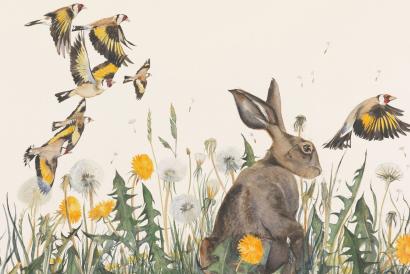 Illustration by Jackie Morris from "The Lost Words"

It has been described as a ‘cultural phenomenon’ by The Guardian, but really it is just a book of spell-poems and paintings. Created as a response to the realisation that we humans were losing sight of the common species, the everyday names of wild things that share our earth, the book’s aim was to re-connect, re-focus, revitalise. As Robert said ‘we do not love what we cannot name, and what we do not love we will not save’.

It had come to our attention that words were slipping out from the mouths and the minds of children, but it was only once the book was complete and beginning to make its way out into the world that this really hit home. In a class full of children I  asked who knew what a wren was. Wren, that small brown bird, feathers small as splinters with a sharp song so loud that threads its way through hedges in parks and gardens. Not one. Not even the teacher. An absence of knowledge.

So the book, of poems and paintings, went out into the world and into bookshops and libraries, into homes and schools. Teachers began to work with it and children wrote their own spell-poems using the book as a catalyst, learned the names, created beautiful images. Some children escaped, out from the classroom into playgrounds and beyond to search for The Lost Words. Outdoor classrooms sprung up, Lost Words gardens and trails. And such beautiful, rich work from children of all ages.

In Scotland a woman called Jane Beaton conceived of the idea to crowdfund to place a copy of the book in all schools in Scotland. She felt that all children should have access to it, and what better way than through the school library. Over a year later, the crowdfunder having been successful, all the books had been delivered and welcomed into schools and a movement, a community of crowdfunders had grown up, some centred on bookshops, others wildlife charities and some just groups of people giving up their time with a passion to raise the funds and distribute the book from Cornwall to Suffolk, Pembrokeshire and Powys and beyond.

What has grown from the acorn of this book is a forest. The exhibition of artwork and words from the book is still touring two years after publication, with a possibility that the exhibition may travel abroad, as the book has been translated into French, Dutch, Swedish, Welsh.

At Hay Winterfest, in the audience, Caroline Slough listened as the Lost Words talk opened with Kerry Andrew singing the wren spell. She and her husband Adam conceived of an idea to make the book sing and gathered together eight of the finest musicians. Out of this came Spellsongs, a performance and album, with sleeve notes illustrated with gilded paintings, and documented in the wonderful photography of Elly Lucas. The music takes the spells deeper into the heart and soul.

And there are other adaptations, choral music in Canada and America, outdoor theatre, and hopefully soon a film. The book draws people together, creates community, celebrates life and gives hope in the dark times. The music makes this richer.

The book took about two years to make, and in the making of it much was learned. It speaks of absence and presence, and while painting the images I learned to sharpen my own focus on the beauty of the nearby wild. It makes you focus on what really matters, to see such beauty in the shape of birds, plants. On the books publication I began to learn so much more. One of the first lessons was that protest does not have to be loud and angry. What we had made with our book was a hymn of protest against the depletion of our natural world and our place in it. Our hope had been to draw the eye, the heart, and in this I think we have, to a point, been successful. But it also taught me so much about human nature. The book has become a gift, given within families, to schools, to libraries, by so many people working together, giving time, money to campaigns, and these groups of people has become connected through generosity and hope. It has been used to engage readers from 0-90 and beyond, with those at the ends of their lives finding peace in the pages, respite for the soul, meaning. And already the music, still young in its life, has been played at naming ceremonies, weddings and funerals.

There are no humans in the book. It is simply wrapped around twenty common words. The human who enters the book is the reader, and readers are welcomed into its pages by the size of the book, which is open-hearted and generous. This is a book for sharing. And they become a part of it as they find the letters, read the spells, conjure the words back into the landscape by their actions. For the book to work it needs its readers, even as we need to discover again our true place in the natural world. Not as something separate from it, but as a small part in a glorious, diverse ecosystem.

Because all change begins with imagination.

Syndicated with permission from Dumbo Feather, a magazine about extraordinary people and there mission is to inspire a community of creative, courageous and conscious individuals. Jackie Morris is a British writer and illustrator. She was shortlisted for the Kate Greenaway Medal in 2016 and won it in 2019 for her illustration of The Lost Words, voted the most beautiful book of 2016 by UK booksellers.

Even though you tie a hundred knots, the string remains one.
Rumi

We've sent daily emails for over 16 years, without any ads. Join a community of 166,016 by entering your email below.