Home > News > How to Support Antiracism in Yourself & in the World

How to Support Antiracism in Yourself & in the World

How do we build a more loving and inclusive world?

In 2016, when the serious troubles in the United States began to boil and coalesce into ever deepening and blatant racism, I went into a period of study with my friend and colleague Amanda Ball. 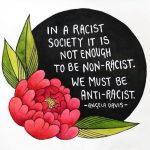 We read everything that we could get our hands on about race, prejudice, and discrimination, and we educated ourselves from the ground up. There was a lot that we didn’t know, because things are set up so that we don’t know. Luckily, there is a vibrant community of writers and speakers who are sharing valuable knowledge. I have listed some of them below if you want to learn.

On the night of the 2016 election, I found many new organizations to support, and then realized that reliable monthly donations would help more than one-time amounts, so I dedicated part of my income every month to organizations that protect the rights of people of color, immigrants, LGBTQIA+ people, disabled people, poor people, and the freedom of the press. I have listed some of them below if you want to help.

Today, the serious and deadly problems caused by our racism are even more obvious than they were in 2016, and as people in the United States and across the world gather to protest racism and police brutality, I thought it might help to give you good things to read, people to follow, organizations to support, and ideas for creating the kind of serious structural change that’s required for an antiracist United States to emerge.

First, listen to the voices of the people themselves

But staying in segregation reduces empathy and it reduces our creative imagination; we need both to create an antiracist world.

If you would like to learn about what’s real and true for people of other races, but you live in a mostly segregated community, watch the shows that are made for them. Read the books. Watch the movies. Listen to the music. Step across the lines of segregation and experience other voices, other ways of living, and other ways of seeing the world.

If you have no close friends or no access to people who are very different from you, it can help to follow people on social media so that you can widen your perspective. For instance, you can follow each of the authors below. Watch and listen closely. Widening your empathy requires a period of respectful silence as you learn how to understand other people and their different experience of the world.

Read the words of people who are working for antiracism

These short articles are helpful, and they offer personal perspectives on racism, plus my own take on how to use privilege for justice.

White Supremacy as a Trauma Response by Resmaa Menakem

I Am Racist, And So Are You by Rachel Shadoan

The Case for Reparations by Ta-Nehisi Coates

How to Be a Privilege Traitor by Karla McLaren

These are some of my favorite and most re-read books about racism and antiracism.

How to Be An Antiracist by Ibram X. Kendi 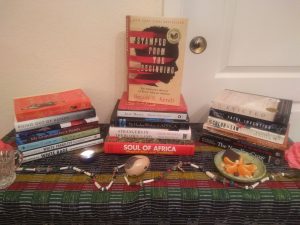 From a ritual on race and reconciliation last year.

So You Want to Talk About Race by Ijeoma Oluo

My Grandmother’s Hands by Resmaa Menakem

The Color of Law by Richard Rothstein

The History of White People by Nell Irvin Painter

Rising Out of Hatred by Eli Saslow

The Making of Asian America by Erica Lee

The Immortal Life of Henrietta Lacks by Rebecca Skloot

Born a Crime by Trevor Noah

Stamped from the Beginning by Ibram X. Kendi

The Healing Wisdom of Africa by Malidoma Somé

Support organizations that are doing the work of antiracism

If you have extra money or time, you can either volunteer for these (and other) organizations, or donate to help them stay afloat and do their important work. Even $5 per month can help.

Before 2016, I was giving one-time donations every now and then, but a friend pointed out that monthly donations would be better, so that these organizations could count on me. Here are some of my favorites that have the most extensive infrastructure and already have their boots on the ground, but there are many, many more.

And most importantly, create, vote for, and support antiracist political change

Racism is a structural fact in the United States and much of the world. It isn’t created by individuals alone; it’s in the air we breathe and in the water we drink (literally, in places like Flint, Michigan).

Racism lives in our ideas, practices, folkways, and laws. Racism lives in and is protected by our institutions, media, regulations, educational systems, financial systems, mortgage lending, zoning rules, medical care, policing, gerrymandering, voter suppression, and our legal system. Changing ourselves is important, but if we don’t change the system, nothing will truly change.

This is an involved process, because racism has a long and involved history

Racism is built into the structure of nearly every aspect of U.S. culture, and it’s not something that can be dealt with in a week, or by one group of people, or in one way, or by one organization. It will take many of us working in many different areas and many different ways.

And today is the perfect day to start, or to continue with fresh eyes and a dedicated heart.

May we all learn to create a world where equality, inclusion, justice, safety, love, empathy, truth, and antiracism reign.

Syndicated from Karla Mclaren's website.  Karla McLaren, M.Ed. is an award-winning author, social science researcher, and pioneering educator whose empathic approach to emotions opens startling new pathways into self-awareness, effective communication, and healthy empathy. She is the author of The Art of Empathy: A Complete Guide to Life’s Most Essential Skill (2013), The Language of Emotions: What Your Feelings are Trying to Tell You (2010), the multi-media online course Emotional Flow: Becoming Fluent in the Language of Emotions (2012), and the upcoming book Embracing Anxiety: How to Access the Genius Inside this Vital Emotion (Sounds True, June 2020).

A hug is the shortest distance between friends.
Author Unknown

We've sent daily emails for over 16 years, without any ads. Join a community of 246,402 by entering your email below.