Home > News > What is Time and Does it Always Move Forward?

What is Time and Does it Always Move Forward?

--by Unknown Yet, syndicated from theconversation.com, Apr 07, 2021

Imagine time running backwards. People would grow younger instead of older and, after a long life of gradual rejuvenation – unlearning everything they know – they would end as a twinkle in their parents’ eyes. That’s time as represented in a novel by science fiction writer Philip K Dick but, surprisingly, time’s direction is also an issue that cosmologists are grappling with.

While we take for granted that time has a given direction, physicists don’t: most natural laws are “time reversible” which means they would work just as well if time was defined as running backwards. So why does time always move forward? And will it always do so?

Does time have a beginning?

Any universal concept of time must ultimately be based on the evolution of the cosmos itself. When you look up at the universe you’re seeing events that happened in the past – it takes light time to reach us. In fact, even the simplest observation can help us understand cosmological time: for example the fact that the night sky is dark. If the universe had an infinite past and was infinite in extent, the night sky would be completely bright – filled with the light from an infinite number of stars in a cosmos that had always existed.

For a long time scientists, including Albert Einstein, thought that the universe was static and infinite. Observations have since shown that it is in fact expanding, and at an accelerating rate. This means that it must have originated from a more compact state that we call the Big Bang, implying that time does have a beginning. In fact, if we look for light that is old enough we can even see the relic radiation from Big Bang – the cosmic microwave background. Realising this was a first step in determining the age of the universe (see below).

But there is a snag, Einstein’s special theory of relativity, shows that time is … relative: the faster you move relative to me, the slower time will pass for you relative to my perception of time. So in our universe of expanding galaxies, spinning stars and swirling planets, experiences of time vary: everything’s past, present and future is relative.

So is there a universal time that we could all agree on? 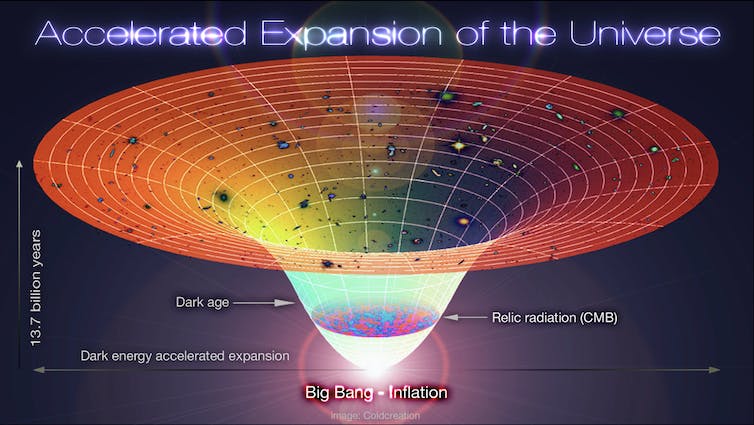 So we know time most likely started during the Big Bang. But there is one nagging question that remains: what exactly is time?

To unpack this question, we have to look at the basic properties of space and time. In the dimension of space, you can move forwards and backwards; commuters experience this everyday. But time is different, it has a direction, you always move forward, never in reverse. So why is the dimension of time irreversible? This is one of the major unsolved problems in physics.

To explain why time itself is irreversible, we need to find processes in nature that are also irreversible. One of the few such concepts in physics (and life!) is that things tend to become less “tidy” as time passes. We describe this using a physical property called entropy that encodes how ordered something is.

Imagine a box of gas in which all the particles were initially placed in one corner (an ordered state). Over time they would naturally seek to fill the entire box (a disordered state) – and to put the particles back into an ordered state would require energy. This is irreversible. It’s like cracking an egg to make an omelette – once it spreads out and fills the frying pan, it will never go back to being egg-shaped. It’s the same with the universe: as it evolves, the overall entropy increases. 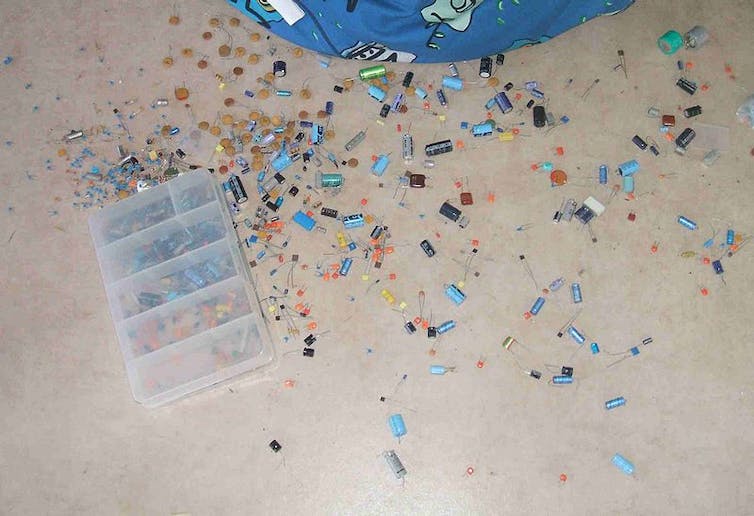 Unfortunately that’s not going to clean up itself. Alex Dinovitser/wikimedia, CC BY-SA

It turns out entropy is a pretty good way to explain time’s arrow. And while it may seem like the universe is becoming more ordered rather than less – going from a wild sea of relatively uniformly spread out hot gas in its early stages to stars, planets, humans and articles about time – it’s nevertheless possible that it is increasing in disorder. That’s because the gravity associated with large masses may be pulling matter into seemingly ordered states – with the increase in disorder that we think must have taken place being somehow hidden away in the gravitational fields. So disorder could be increasing even though we don’t see it.

But given nature’s tendency to prefer disorder, why did the universe start off in such an ordered state in the first place? This is still considered a mystery. Some researchers argue that the Big Bang may not even have been the beginning, there may in fact be “parallel universes” where time runs in different directions.

Time had a beginning but whether it will have an end depends on the nature of the dark energy that is causing it to expand at an accelerating rate. The rate of this expansion may eventually tear the universe apart, forcing it to end in a Big Rip; alternatively dark energy may decay, reversing the Big Bang and ending the Universe in a Big Crunch; or the Universe may simply expand forever.

But would any of these future scenarios end time? Well, according to the strange rules of quantum mechanics, tiny random particles can momentarily pop out of a vacuum – something seen constantly in particle physics experiments. Some have argued that dark energy could cause such “quantum fluctuations” giving rise to a new Big Bang, ending our time line and starting a new one. While this is extremely speculative and highly unlikely, what we do know is that only when we understand dark energy will we know the fate of the universe.

So what is the most likely outcome? Only time will tell.


This article is republished from The Conversation under a Creative Commons license. Read the original article. Disclosure statement: Thomas Kitching receives funding from the Royal Society, and the Science & Technology Facilities Council.

Whatever you do will be insignificant, but it is very important that you do it.
Mahatma Gandhi

We've sent daily emails for over 16 years, without any ads. Join a community of 242,981 by entering your email below.