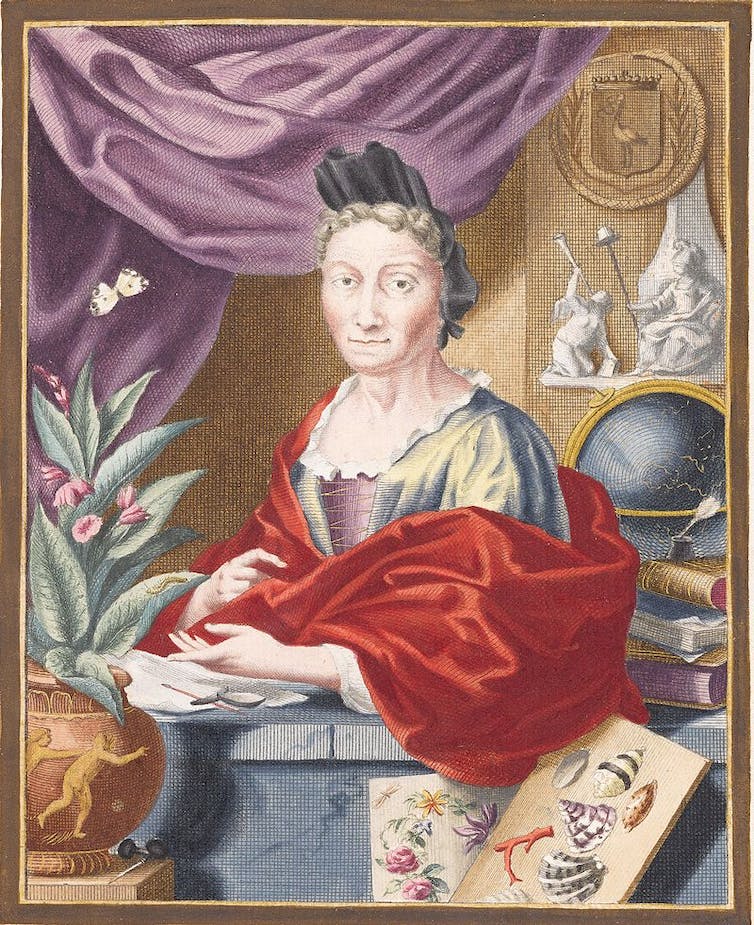 In this series, we look at under-acknowledged women through the ages.

Most school kids can describe in detail the life cycle of butterflies: eggs hatch into caterpillars, caterpillars turn into cocoons and cocoons hatch. This seemingly basic bit of biology was once hotly debated. It was a pioneering naturalist, Maria Sibylla Merian, whose meticulous observations conclusively linked caterpillars to butterflies, laying the groundwork for the fields of entomology, animal behaviour and ecology.

Maria Sibylla Merian was born in 1647 in Frankfurt at a time when the scientific study of life was in its infancy. Although she was trained as an artist, Merian is arguably one of the first true field ecologists. She studied the behaviour and interactions of living things at a time when taxonomy and systematics (naming and cataloguing) were the main pursuit of naturalists.

Like most modern entomologists, Merian’s passion for insects started early. At 13, she began collecting and raising caterpillars as subjects for her paintings. She often painted by candlelight, awaiting the moment when a caterpillar formed its cocoon or a newly formed butterfly later emerged from it. 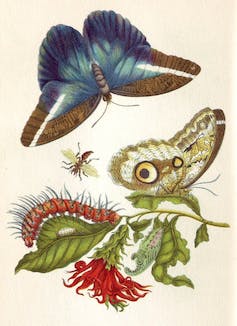 Merian painted caterpillars feeding on their host plants and predatory animals feeding on their prey. She was intent on capturing not only the anatomy of her subjects, but also their life cycles and interactions with other living things. Rather than working from preserved specimens (as was the convention of the time), she captured the ecology of species, centuries before the term even existed.

The fact that Merian found the time to conduct her studies is a testament to the power of a curious mind. Unlike many male naturalists of her day, Merian did not have the freedom to devote all of her time to the study of insects.

In 1665, at the age of 18, Merian married her stepfather’s apprentice, painter Johann Andreas Graff. Her first daughter, Johanna, was born in 1668 and in 1670 the family moved to Nuremburg. Her second daughter, Dorothea, was born in 1678.

Merian’s marriage appears to have been an unhappy one. In 1685, she left Graff to live in a religious community, taking both daughters with her. In 1692, Graff formally divorced Merian.

As a mother of two, Merian was responsible for home-care and child-rearing. She secured her family’s finances by teaching painting to the daughters of wealthy families. In many ways, she was one of the first “science moms”, trying to balance the challenges of her research against a demanding family life.

All of this at a time when women were still being burned as witches – being a curious, intelligent woman was very hazardous indeed.

In Surinam with her daughter 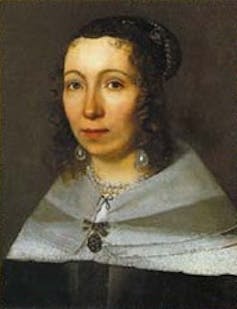 A 17th-century portrait of Maria Sibylla Merian by an unknown artist. Wikimedia Commons

By breeding butterflies from egg to adult for several generations, Merian showed definitively that eggs hatched into caterpillars, which eventually turned into butterflies.

Merian’s books on caterpillars (published in 1679 and 1683) would have been enough on their own to earn her a place in science history.

But in 1699, at the age of 52 and with her youngest daughter (then aged 20) in tow, she embarked on one of the first purely scientific expeditions in history. Her goal was to illustrate new species of insects in Surinam, a South American country (now known as Suriname) only recently colonised by the Dutch. After two months of dangerous travel, the two women arrived in an entomologists’ paradise.

Surrounded by new species, Merian was itching to collect and paint everything she could get her hands on. She immediately ran into problems, however, as the Dutch planters of the island were unwilling to help two unaccompanied women collect insects from the forest, a mission they believed to be frivolous.

So Merian forged relationships with enslaved Africans and Indigenous people who agreed to bring her specimens and who shared with her the medicinal and culinary uses of many plants. For example, Merian writes that enslaved Amerindian women used the seeds from particular plants to abort fetuses in order to spare them from the cruelty of slavery. It is a stark reminder of the unmitigated horrors of 1600s colonialism. 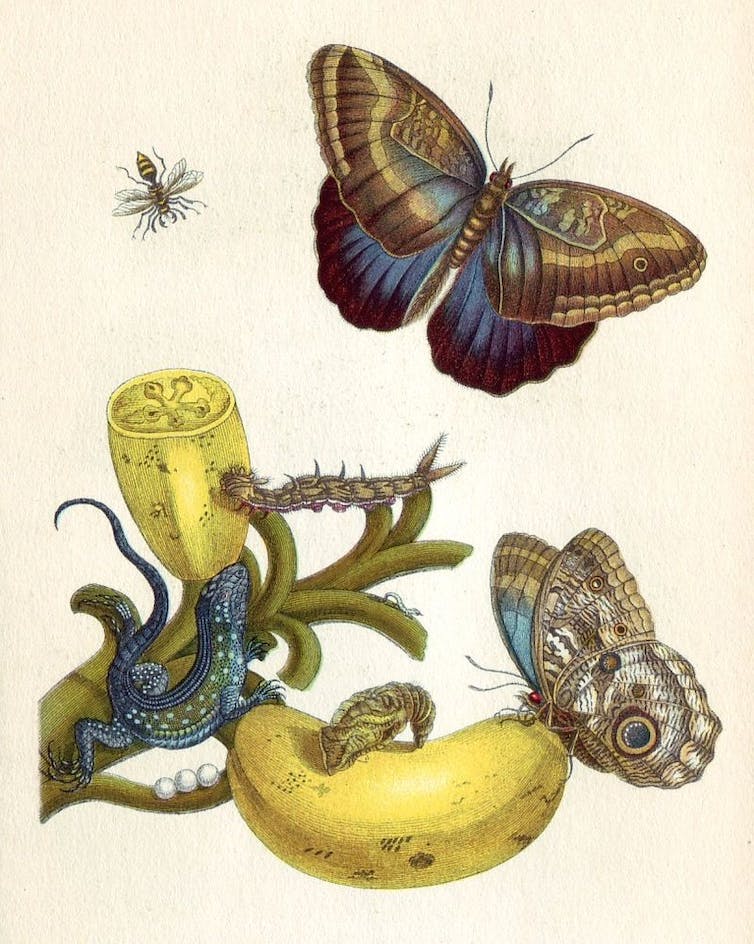 Merian and her daughter worked in Surinam for two years before Merian’s failing health forced her to return home. The book that resulted from her time in Surinam, Metamorphosis insectorum Surinamensium, was well known in both artistic and scientific circles.

Merian’s eldest daughter, Joanna, eventually made the journey to Surinam and would send her mother new specimens and paintings until Merian’s death in 1717.

I am an insect ecologist and a field biologist; Merian’s work forms the very foundations of my discipline. Yet I am ashamed to confess that until relatively recently I was unaware of the magnitude of Merian’s contribution to biology. It has only been in the last few decades that recognition for her scientific contributions has had a resurgence. 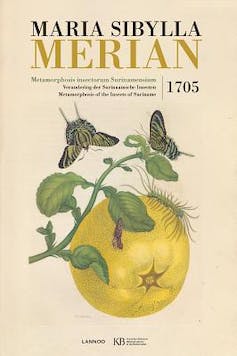 How did such a scientific superhero all but disappear from science history?

Merian was well known in her time. Karl Linnaeus, famous for developing a system for classifying life, referred heavily to her illustrations in his species descriptions. The grandfather of Charles Darwin, Erasmus Darwin, cites Merian’s work in his book The Botanic Garden.

But, after her death, inaccuracies began to creep into the hand-painted copies of Merian’s books. New plates with imaginary insects were added. Others were recoloured to be more aesthetically pleasing. The careful attention to detail that made Merian’s work so incredible was gradually eroded.

In the 1830s, naturalist Lansdowne Guilding – who had never visited Surinam – wrote a scathing critique of Merian’s work in a book entitled Observations on the work of Maria Sibylla Merian on the Insects, of Surinam. He uses words like “careless”, “worthless” and “vile and useless” to describe Merian’s engravings, which he felt were riddled with inaccuracies. Many of the errors Guilding attacks were added after Merian’s death and were not faithful to her original work.

There is also a strong undercurrent of sexism in Guilding’s critiques; in one place he accuses Merian of ignoring facts “every boy entomologist would know”. Guilding attacks Merian for relying too heavily on the knowledge of African slaves and Amerindians, people he regarded as unreliable.

The fact that Merian was an artist who had no formal scientific training also played a role in the efforts to discredit her. By the 1800s, biology was practised by university-trained academics and self-trained naturalists like Merian were now treated with an air of disdain. Never mind the fact that women of Merian’s day were barred from university educations. 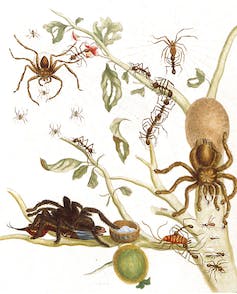 It didn’t help that some of Merian’s observations sounded fantastical – she claimed that in Surinam there lived tarantulas that ate birds, and ants that formed bridges with their bodies. These claims seemed too odd to be true and so began to attract considerable scepticism.

Other authors began to see Merian’s observations as the flights of fancy of an old woman far outside her depth. And so Merian ceased to be remembered as a pioneering naturalist. She was instead dismissed as an old woman who painted beautiful – but entirely unscientific – pictures of butterflies. Although her work continued to inspire and influence generations of artists, her contributions as a scientist were largely forgotten.

Modern scientists have since confirmed the “bird-eating” tarantula’s habit of occasionally consuming small birds and we now know that army ants do indeed build bridges out of their living bodies.

Merian’s “flights of fancy” were not fanciful after all.


This article is republished from The Conversation under a Creative Commons license. Read the original article. Tanya Latty is Senior Lecturer, School of Life and Environmental Sciences, University of Sydney

A mother's heart is the child's classroom
Henry Ward Beecher