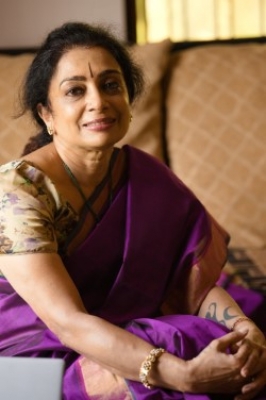 In the spring of 2017, Nandini Murali, a South Indian journalist and author, returned from an out-of-town assignment to an eerily quiet home. Typically, her husband would greet her at the front door, but that morning he hadnt answered her phone calls. It was Nandini who discovered his body, and confronted an unfathomable reality. T.R. Murali, one of the most prominent urologists in India, and her beloved husband of 33 years, had ended his own life. "Space dissolved," writes Nandini, of that moment. "Time stood still. The axis of my life heaved, cracked and split." On the first anniversary of her husband's death, Nandini launched SPEAK (Suicide Prevention Postvention Education Awareness Knowledge). SPEAK seeks to cultivate awareness instead of stigma, and to break the taboos, shame, and secrecy around suicide through public campaigns and sensitization. Through SPEAK, Nandini has mobilized social support for prevention, intervention, and postvention efforts in India and beyond.In the course of these efforts, her searing personal grief has shape-shifted into deeply activated compassion and powerful clarity of purpose.

What follows is an excerpt from 'Left Behind: Surviving Suicide Loss' by Nandini Murali, Westland Publications, March 2021.

Death by suicide is a mysterious, puzzling and confusing experience for the bereaved, compounded by the accompanying trauma. The grief following such a death (as with death by homicide, accident, and death due to natural disasters) is traumatic because of the violence of the act and its suddenness.

The suicide of my spouse was sudden and shocking. A violent death, it felt like an ambush. I was not only mourning the loss of a partner but also traumatised, even more so because I was the one who discovered the suicide.

Suicide is not an easy subject to talk about. It is commonly perceived as a private event motivated by dysfunctional individual behaviour and not a public health issue that impacts communities. Such negative stereotypes about suicide inform, influence and impact the trajectory of suicide grief, such that navigating grief becomes a lonely, isolating and frightening experience. Haunted by guilt, most survivors spend a disproportionate amount of time seeking to comprehend the motivations of the deceased.

‘Standing under the mysterious experience of suicide grief provides us with a unique perspective. Maybe only after exhausting an instinctive search for the “why” of suicide can we discover a newly defined “why” for our lives,’ writes Wolfelt in Understanding Your Grief: Ten Essential Touchstones for Finding Hope and Healing Your Heart.

In our desperate desire to make meaning, we are driven by an intense need to conduct a personal psychological autopsy. We try to make sense of the death and our role in the tragedy, with the limited pieces of the jigsaw puzzle, even as we desire to complete the big picture. It takes many agonising moments of truth to realise that no matter how hard we try, we may never know with certainty why our loved ones died the way they did. Healing begins with confronting and accepting this inconvenient truth.

‘Suicide can shatter many of the things you take for granted about yourself, your relationships and your world,’ writes John Jordan in After Suicide Loss: Coping with Your Grief. Among the many things that shatters is our perception of our loved one and the nature of our relationship with them. We are confronted with a harsh reality check: Did we really know our loved one at all? Or were we living with a stranger?

Survivors of suicide loss are confronted with several recurring impulses. First, we constantly feel the need to make meaning of this mysterious death. We try to decipher the motivations of the deceased, we explore our role in and responsibility for the death, and we are swamped by the resulting turbulent emotions of anger, guilt and blame—all of which are amplified and reinforced by the mainstream societal view of suicide as sin and crime.
‘Suicide is a difficult conundrum,’ writes Jordan. Unlike with other kinds of death, in suicide, the victim is also seen as the perpetrator. Naturally, survivors of suicide loss find themselves in a Catch-22 situation. I was angry with my husband for having rejected my love. His self-inflicted death felt like abandonment. I was also angry with myself for not having prevented such a tragedy.

Then there is the eternal question of the role of choice in suicide. Is suicide voluntary? An act of free will? Or is it influenced by psychological factors outside one’s conscious control?

We are asked why our loved ones chose suicide because people are usually unaware that there is no simple, one-sentence explanation for it. A death by suicide disrupts social relationships. Most survivors of suicide loss are fearful and uncertain of how friends and family will view them. And most people, in turn, are equally uncertain and ignorant about how to respond appropriately to the bereaved. The latter fear discomfort; the former, condemnation and rejection. The ambiguity and ambivalence make bereavement profoundly isolating and alienating.

According to Jordan, a death by suicide also creates ‘information management problems’ in families. Most families agonise over how transparent they should be about divulging the cause of death. To tell or not to tell becomes a contentious issue that splits them. Most families, however, prefer to keep it secret—a decision that has a powerful impact on their eventual healing. As they struggle to create a shared narrative in the aftermath of the suicide, family discord and estrangement are secondary losses that a survivor of suicide loss may face. These compound and complicate the primary trauma and deprive survivors of valuable support in their transition journey.

Suicide shatters normative assumptions and stability in the survivor’s world. Bereavement in this context has been rather evocatively described as ‘grief with the volume turned on’. This simply means that emotions such as anger, fear, sadness and guilt that are common responses to loss are amplified and intensified. As a result, the grieving process is longer and more complex, aptly termed as complicated grief.

A death by suicide is fodder for wild speculation and gossip—it is a public death, and the medico-legal implications are many. Survivors, relatives and friends are unsure and confused, and are unable to come up with informed and sensitive responses.

The stigma acts as a mirror, and as a result, survivors internalise the shame and negative societal attitudes towards it. They fear that they, and the victim, will be judged negatively, and end up isolating and withdrawing themselves. Such a loss of social networks and breakdown of interpersonal relationships, both within the family and outside, delays or stunts the healing of the survivors, who remain unheard and unseen.

It would be helpful if relatives and friends were sensitised to this issue, with consideration and thought given to compassionate ways of responding and making themselves present and available. This is a complicated matter that takes considerable effort to navigate, but doing so would provide much needed support to the survivor.

The complexity of suicide translates into the complexity of grief after a suicide death. During the early phase of my own bereavement, I felt as though no one understood my predicament. Naturally, how could they? Because suicide is a non-normative death, conventional yardsticks of grief and mourning cannot be automatically transposed. Despite their well-meaning intentions, I didn’t think people understood. Worse, I sensed an empathy deficit in most people. They were too bewildered by the tragedy to display any meaningful empathy.

During my compulsive search for online resources on suicide bereavement, I discovered an online suicide bereavement support group called Grief Relief for Survivors of Suicide Loss. Impressed by their comprehensive ground rules—especially the one which stated that it was a closed group and membership was based on the lived experience of suicide loss—I stepped in tentatively. A peer-led initiative, the group is moderated and led by Linda Marshall Leroux, a survivor of suicide loss herself, grief psychotherapist and life coach.

Left Behind: Surviving Suicide Loss, is Nandini's fourth and latest book. In it, "She not only relates her own story of incalculable loss but also tells the stories of others like myself, who continue to wrestle with the unique grieving and mourning that follow the suicide of a loved one," writes Nandini's friend and fellow author Carla Fine, "All survivors of suicide loss will welcome Nandini’s practical and pioneering advice about how to develop resilience while never forgetting the person we have loved and lost.”

Join this Saturday's Awakin Call with Nandini Murali, "Owning Our Stories: Breaking the Silence Around Suicide to Heal Self & Society." More details and RSVP info here.

Shared joy is a double joy; shared sorrow is half sorrow.
Swedish proverb

We've sent daily emails for over 16 years, without any ads. Join a community of 244,851 by entering your email below.