Revolutions and the Politics of Being 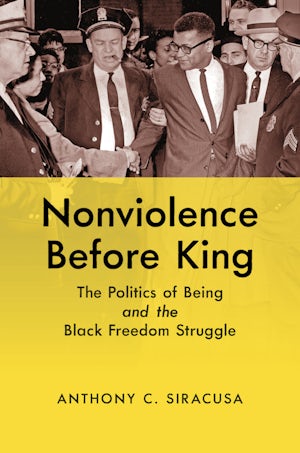 The following excerpt is from Nonviolence Before King: The Politics of Being and the Black Freedom Struggle by Anthony Siracusa, The University of North Carolina Pressâ€…â€…Chapel Hill (2021)

Historians and sociologists, political scientists and scholars of religion and law have acknowledged for decades the centrality of nonviolent direct action to the Black freedom movement. But we know much less about the evolution of the political philosophy of religious nonviolence, a set of ethics that led to the rise and appeal of nonviolent direct action for many Black Americans. [...] Inspired by the preaching and writing of Howard Thurman, three figures—Pauli Murray, Bayard Rustin, and James M. Lawson Jr.—organized around the idea that Black people could generate significant political power by collectively expressing their right to be, fully and freely, refusing to con- tort themselves to the pervasive intrusions of a racist, sexist, and homo- phobic society. They argued that adhering to Jim Crow’s caustic demands ran contrary to their understanding of the purpose of human life, which was the full and creative expression of human freedom. They demonstrated this collective freedom through carefully staged nonviolent direct actions, and over the course of four decades each made vital contributions to the language, practice, and institutions that established nonviolence as a revolutionary force in the modern United States.

A radically democratic tactic, direct action has long been a hallmark of the struggle for Black freedom in the United States, one that had a profound impact both on individuals and on the nation.7 The historian Paula Giddings writes of “the personal effect” that nonviolent direct action had on individual practitioners in the early student movement, citing the “Jail, No Bail!” strategy led by Fisk student Diane Nash and Spelman student Ruby Doris Smith in their 1960 Rock Hill campaign. Giddings argues that the practice of nonviolent direct action “forged a strong bond” among movement participants “and made them more determined than ever to devote their lives to the movement.” Nonviolent direct action was becoming a widespread tactic in the student movement by the time of the 1960 Rock Hill campaign, a “developmental style of politics” that contributed directly to the growth of individual and collective power for Black youth activists. Sometimes de- scribed as a “weapon of the weak,” nonviolent direct action is perhaps better understood as a powerful tool for resilient local people—one that demanded courage and discipline but that also drew on, cultivated, and sustained power for rank-and-file demonstrators.

But if nonviolent direct action proved to be an effective method for how local people might challenge Jim Crow, the philosophy of nonviolence be- came an answer to why many struggled in this way. Angeline Butler recalled the power of learning about nonviolence in a 1959 workshop taught by James M. Lawson Jr. “In these workshops what we were talking about was our future,” Butler remembered. “A new phase of my life began as we ad- dressed the truth about our place in the society and how society looked at us as a people. We studied Mahatma Gandhi, the life of Jesus Christ, and Thoreau. Pretty soon we applied their teachings of nonviolence and civil disobedience to the fundamental inequality of people in Nashville’s segregated society.” The Nashville workshops led to the end of legal segregation in Nashville in 1960, but the impact on individual students was one that of- ten lasted a lifetime. “The movement made each of us into a ‘one person army,’ strong enough to take the lead wherever we could visualize that change was needed,” Butler remembered. Butler and her fellow students learned the philosophy of nonviolence in preparation for dangerous direct action, becoming the “shock troops” of the early 1960s freedom movement. They risked their lives in public demonstrations challenging Jim Crow, but it was not at all clear that their efforts would change laws, policies, or customs. So why did they choose nonviolence? Diane Nash, among those who participated in Lawson’s workshops on nonviolence in the late 1950s, re- called being five months pregnant in the sweltering heat of Mississippi’s Parchman Penitentiary following her arrest during the Freedom Rides of 1961. “I was scared the whole time. . . . But here’s the thing—you had to do what was required or you had to tolerate segregation. And whenever I obeyed a segregation law I felt like I was agreeing that I was too inferior to do what the general population did.” Butler and Nash point to the power of nonviolence as a way of being in the world. Rather than “converting” an opponent to a different way of thinking or acting, the immediate act of claiming the freedom to be had a galvanizing impact on the students them- selves, often Black students, fortifying a deep sense of internal security that could steel them for a lifetime of movement work.

For a critical cohort of activists and intellectuals, this decision to take nonviolent direct action was a choice about how to be in the world. It was a choice that flowed from the belief that the full flourishing of one’s personality, allowing one’s “inner light” to shine forth, was the great promise and guaranteed birthright of all human beings. The choice to be, fully and freely, was rooted in the conviction that all people deserved the opportunity to grow into the fullness of their being—that no one should shrink away from this raison d’eÌ‚tre in the face of Jim Crow racism or Jane Crow sexism. Re- fusing cooperation with the disfiguring demands of a racist and sexist society, choosing to be fully and freely rather than to act from “behind the veil,” these choices were made strategically and collectively to force whites in a Jim Crow society to see and confront the basic humanity—the distinct and complex individual personalities—of Black Americans.

These ways of being often provoked violence from white bystanders. But in responding to this violence with mercy, kindness, and forgiveness, nonviolent demonstrators patented a method designed carefully to contrast with and transform the cruel structure of domestic American politics. In responding to such violence with acts of mercy and compassion, these Black students demonstrated to the nation the world as it should be, a violent white society engaged and transformed by Black students embodying non- violent acts of love and forgiveness. I describe this phenomenon as a politics of being and suggest that these collective acts of nonviolent being proved more powerful than Jim Crow because they did not replicate the institutional forms of power long used to subjugate and exploit Black people: law and violence. Instead, the politics of being drew on an ethic much older than the United States and its particular brand of white supremacy, one deployed strategically to force Black humanity to the center of a nation founded on white superiority.

The above is excerpted from Nonviolence Before King: The Politics of Being and the Black Freedom Struggle by Anthony Siracusa, The University of North Carolina Pressâ€…â€…Chapel Hill (2021). Anthony C. Siracusa is the Senior Director of Inclusive Cultures and Initiatives at the University of Colorado at Boulder.