Golden: The Power of Silence in a World of Noise

The following is an excerpt from Golden: The Power of Silence in a 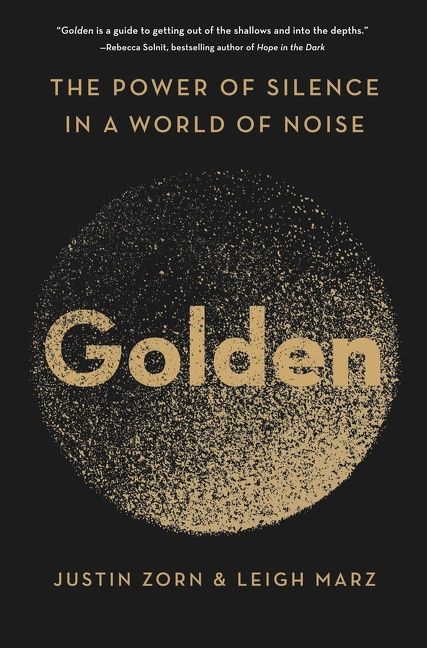 Over the past fifty years, mindfulness meditation has taken a remarkable journey from remote monasteries of Burma and Thailand to the pinnacles of mainstream power—places like Apple, Google, GE, and the Pentagon. While some of this rise is attributable to increasing openness to new mindsets and worldviews since the revolutions of the 1960's, we believe the biggest reason for its newfound popularity is straightforward: There is a deep yearning for silence in a world of more and more noise. Whether we consciously realize it or not, we sense that pristine attention is increasingly scarce. We need ways to cope.

It’s good news that mindfulness is now mainstream. While we haven’t always kept up a rigorous practice, it’s helped both of us manage the noise at important moments in our lives, and we know meditation and mindfulness have profoundly helped millions of others. In fact, we’ve played our own very small roles in its spread. Leigh has integrated meditation into her leadership and organizational development work with nonprofits, major universities, and US federal agencies. And during Justin’s years as a policy adviser and strategist in the US Congress, he helped launch a mindfulness program and led meditation sessions for policymakers on both sides of the aisle.

But “going mainstream” implies successful adaptation, not necessarily measurable results. In 1992, the Jungian psychologist James Hillman and the cultural critic Michael Ventura published a book called We’ve Had a Hundred Years of Psychotherapy—and the World’s Getting Worse. You could say something similar today. We’ve had forty years of mindfulness, and the world is more distracted than ever. Even as advocates and practitioners of formal sitting meditation, we’re not convinced that it’s a cure-all. It’s extremely valuable. But it’s just not for everybody.

Joshua Smyth, a professor at Pennsylvania State University and a leading researcher in the field of Biobehavioral Health and Medicine, explains, “a lot of the claims about the benefits of mindfulness pertain to individuals who are serious practitioners.” Smyth sees great value in these studies but warns against extrapolating the findings too broadly. “When you randomly assign people [to mindfulness studies], 70 percent do not adhere to the recommended levels,” he tells us. In other words, they don’t follow the protocol. He adds, “as many as a third to a half completely stop doing their practice even within the context of a trial—let alone persisting after they've been paid to be in a research study.” These percentages are as bad as or worse than weight loss studies. Smyth sums up the challenge: “If you don’t take the medicine, the treatment won’t work.”

This isn’t a judgment about mindfulness or of the people who don’t maintain the practice. It’s just evidence that any “one size fits all” approach is unlikely to be an enduring solution to the complex challenge of staying centered amidst the destabilizing winds of modern mental hyper-stimulation.

As people, we all have different styles, different preferences, different ways of learning, and different ways we make meaning. We have varying degrees of command and autonomy over how we organize our days, weeks, months, and years, and those realities change over time. What’s more, there can be cultural, religious, psychological, or physical barriers to what’s typically called mindfulness meditation—the mostly Buddhist-derived practice of alert sitting or walking and observing the breath and the thoughts for a sustained period.

So, how, then, do we respond to the onslaught of noise? If meditation isn’t for everyone, then how do we bring remedies to the scale that’s necessary in today’s world?

In this book, we propose an answer:

There are three basic steps to the process:

1)              Pay attention to the diverse forms of auditory, informational, and internal interference that arise in your life. Study how to navigate them.

2)              Perceive the small pockets of peace that live amidst all the sounds and stimuli. Seek these spaces. Savor them. Go as deeply into the silence as you possibly can, even when it’s only present for a few seconds.

When it comes to the work of finding equilibration and clarity amid the noise, we can look beyond the formal rules and tools of what’s typically called meditation these days. We can forget about questions like “Am I doing it right?” Each one of us—in our own way—knows what silence feels like. It’s something inherent to being human. It’s a gift of renewal that’s available to us, always, even if it’s sometimes hidden.

This is a book about why and how to find silence. It’s about how to understand and manage the noise, so that we can more consciously tune-in to nature, to one another, and to the sonic essence of life itself.

In Part One, we’ll explore the meaning of noise—as unwanted distraction at the auditory, informational, and internal levels of perception. Then we’ll contemplate the meaning of silence as both the absence of noise and also this presence unto itself. We’ll next consider why silence matters—not only for our own personal calmness and clarity—but also for the shared work of healing our world: building a better social, economic, political, and ecological future. In Part Two—The Science of Silence—we’ll look at the importance of transcending auditory, informational, and internal noise for our physical health and cognition. We’ll investigate the meaning of ‘silence in the mind,’ looking to the frontiers of contemporary neuroscience. In Part Three—The Spirit of Silence—we’ll explore the promise of silence as a pathway to awareness, empathy, creativity, and ethics. We’ll then look at why virtually all the world’s great religious and philosophical traditions emphasize silence as a pathway to truth. In Part Four—Quiet Inside—we’ll embark on the practical work of finding silence in a world of noise, exploring strategies and ideas for how individuals can find silence in ordinary moments of daily life as well as through more rarified, transformational experiences. In Part Five—Quiet Together—we’ll turn to the social kind of silence, exploring practices for getting beyond the noise and finding renewal in shared settings, including our workplaces, at home with our families, and among our friends. Finally, in Part Six—A Society That Honors Silence—we’ll zoom out to questions of public policy and cultural change, imagining what it would mean for our cities, our nations, and even our whole world to reclaim reverence for the wisdom of quiet.

In this book, we’ll explore ideas and practices that might help you to become more patient, aware, and even effective in your work, your home life, your management of big and small challenges. Yet, we want to be clear that silence isn’t a “resource” you can control in a tidy or formulaic way. We can’t assess its value on the basis of “what it can do for us.” As the aphorism, silence is golden, suggests, silence has intrinsic value. And, as the words of Thomas Carlyle, silence is of eternity, imply, it can’t be quantitatively measured and employed for our own purposes. Over the past couple decades, we’ve seen mindfulness practice often sold as a productivity tool, a performance enhancement for anything—even for sharpshooters to improve their aim or CEOs to conquer the world. Silence, we find, is bigger than self-improvement. It can’t be enlisted to advance personal ambitions. Silence, by definition, has no agenda.

Over the course of writing this book, the original intuition we felt has grown into more and more of a conviction. We still believe strongly in the importance of expression and advocacy and protest for what’s right. We still recognize that the Internet, ubiquitous communication tools, and roaring industrial technologies can bring us benefits, too. Yet, in the face of that despondent feeling about the state of the world, we keep turning to this same answer:

Go beyond the noise. Tune-in to silence.

Excerpted from Golden: The Power of Silence in a World of Noise, May 2022, Harper Wave Publishers. Justin Talbot Zorn has served as both a policymaker and a meditation teacher in the U.S. Congress. A Harvard- and Oxford-trained specialist in the economics and psychology of well-being, Justin has written for the Washington Post, The Atlantic, Harvard Business Review, Foreign Policy, and other publications. He is cofounder of Astrea Strategies, a consultancy that bridges contemplation and action, helping leaders and teams envision and communicate solutions to complex challenges. He lives in Santa Fe, New Mexico, with his wife and three children. Leigh Marz is a collaboration consultant and leadership coach for major universities, corporations, and federal agencies as well as a longtime student of pioneering researchers and practitioners of the ritualized use of psychedelic medicines in the West. In her professional work, she has led diverse initiatives, including a training program to promote an experimental mindset among teams at NASA and a decade-long cross-sector collaboration to reduce toxic chemicals in products, in partnership with Green Science Policy Institute, Harvard University, IKEA, Google, and Kaiser Permanente. She is the cofounder of Astrea Strategies. Leigh lives in Berkeley, California, with her husband and daughter.